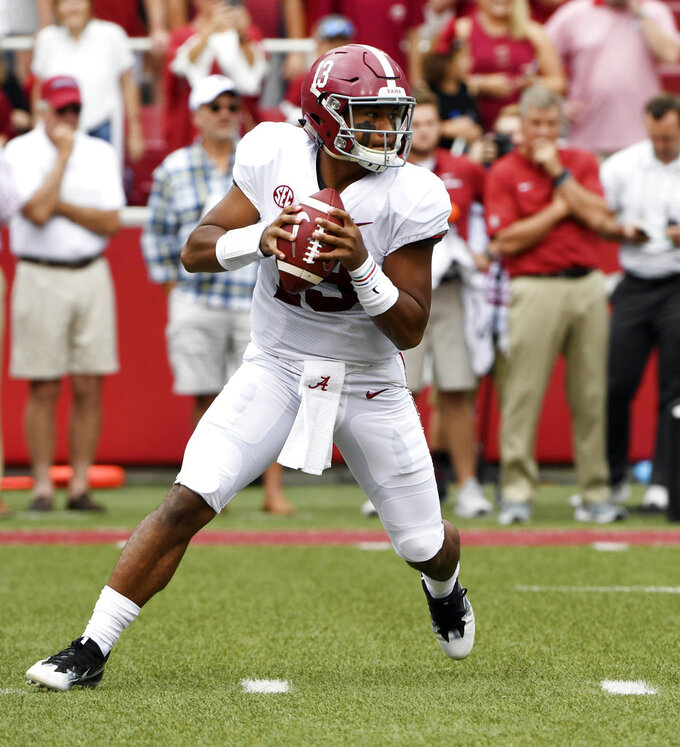 FILE - In this Oct. 6, 2018, file photo, Alabama quarterback Tua Tagovailoa rolls out before throwing a touchdown pass on the first play of the game against Arkansas in the first half of an NCAA college football game, in Fayetteville, Ark. Tagovailoa is the offensive player of the year and one of five members of the top-ranked Crimson Tide to earn first-team honors on The Associated Press All-Southeastern Conference team, announced Monday, Dec. 3, 2018. Tagovailoa, one of the prime contenders for the Heisman Trophy, has thrown 37 touchdown passes with only four interceptions to rank second nationally in passing efficiency. (AP Photo/Michael Woods, File)

BIRMINGHAM, Ala. (AP) — Southeastern Conference champion Alabama has a league-high 12 players on the all-conference team selected by SEC coaches.

Georgia had seven players selected on the team. Missouri and South Carolina each had five all-SEC selections.

Coaches weren't permitted to vote for their own players. The team was announced Tuesday, one day after the release of the Associated Press all-SEC team that was selected by a 28-member media panel.