14 SEC players who could have breakthrough seasons 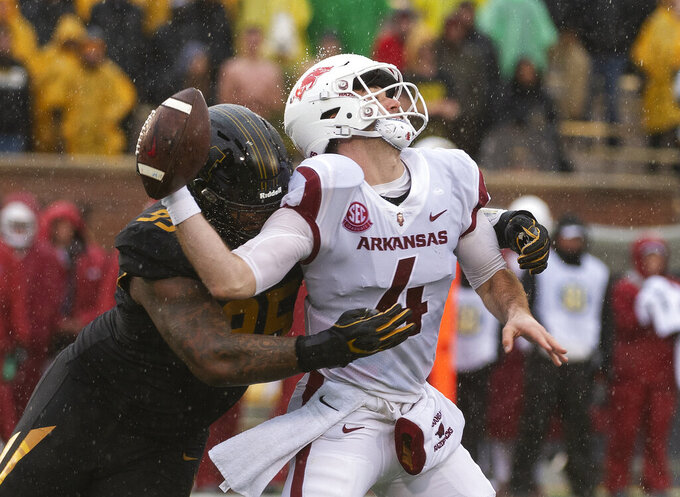 FILE - In this Nov. 23, 2018, file photo, Missouri defensive lineman Jordan Elliott, left, hits Arkansas quarterback Ty Storey, right, causing him to fumble the ball, during the first half of an NCAA college football game in Columbia, Mo. Elliott is expected to emerge as one of Missouri’s top defensive players in 2019. (AP Photo/L.G. Patterson, File)

Now that spring practice has ended, here's a list of Southeastern Conference players who are poised to break out this fall. Classes listed are their classes in the fall.

AMARI BURNEY, LB, Soph. — Burney, a converted safety, takes over for NFL-bound Vosean Joseph at the all-important "star" position in Florida's defense. The 6-foot-2, 222-pound sophomore can chase down ball carriers, run with receivers and blitz off the edge — the kind of versatility that will keep offenses guessing. Joseph led Florida with 93 tackles last season — nine for loss — and had five pass breakups. Burney could be even better.

DEMETRIS ROBERTSON, WR, Jr. — This former five-star recruit started his career at California. He had four carries for 109 yards and no catches last year in his first season at Georgia but has won compliments from coach Kirby Smart this spring. The 6-foot Robertson has a great opportunity for playing time now that Riley Ridley and Mecole Hardman have left school early to enter the draft.

JAMAR "BOOGIE" WATSON, OLB, Jr. — Watson will be Kentucky's main edge rusher this fall now that 2018 All-America selection and SEC defensive player of the year Josh Allen has left for the NFL. Watson recorded five sacks last year to rank second on the team behind Allen's 17. Watson capped a solid spring by recovering a fumble in the spring game.

JORDAN ELLIOTT, DT, Jr. — This Texas transfer showed his potential last year when he recorded three sacks in the regular-season finale against Arkansas and was named SEC defensive player of the week. He followed that up with a productive spring and should emerge as one of Missouri's top defensive players.

ZACCH PICKENS, DT, Fr. — Pickens is an early enrollee who drew rave reviews this spring. Pickens was the nation's No. 1 defensive tackle and No. 8 overall prospect in his high school class according to composite rankings of recruiting sites compiled by 247Sports. He is South Carolina's most highly rated signee since Jadeveon Clowney arrived on campus eight years ago.

WANYA MORRIS, OT, Fr. — Morris has a legitimate shot to begin his college career as Tennessee's starting left tackle. The early enrollee spent spring practice working with the first-team offensive line. Tennessee signed two five-star offensive tackle prospects by adding Morris and Darnell Wright, who won't arrive on campus until this summer. It wouldn't be a surprise if both end up starting.

RILEY NEAL, QB, Sr. — Neal started 32 games at Ball State before heading to the SEC as a graduate transfer. He is competing with Deuce Wallace for the right to replace four-year starter Kyle Shurmur as Vanderbilt's starting quarterback. Neal split first-team reps with Wallace during spring practice.

TREY KNOX, WR, Fr. — This 6-5 freshman should provide an immediate impact for an Arkansas offense that needs more weapons with the Razorbacks coming off a 2-10 season. In the spring game, Knox caught three passes for 57 yards, including a 45-yard touchdown.

SETH WILLIAMS, WR, Soph. — The 6-3 Williams emerged as a playmaker his freshman season and appears poised for an even bigger role this year following the departures of Ryan Davis and Darius Slayton. Williams was the offensive most valuable player of the spring game, with four catches for 103 yards and two touchdowns.

DEREK STINGLEY JR., CB, Fr. — Stingley should continue LSU's tradition as Defensive Back U. The former five-star recruit will enter August camp as LSU's No. 1 punt returner and will compete with sophomore Kelvin Joseph for a starting cornerback spot opposite Kristian Fulton. He picked off a pass in the spring game.

ELIJAH MOORE, WR, Soph. — Moore managed to get considerable playing time during his freshman season as part of a loaded group of receivers that included A.J. Brown, D.K. Metcalf and DaMarkus Lodge. Now those guys are gone and Moore will be one of the Rebels' main options.

ERROLL THOMPSON, LB, Jr. — Thompson was very good last season and delivered 87 tackles, but he was a little overshadowed on a defense that also had potential first-round draft picks Montez Sweat and Jeffery Simmons. Now that Sweat and Simmons have departed, Thompson has a chance to move into the SEC's elite as a leader of the Bulldogs' defense.

BOBBY BROWN III, DL, Soph. — Brown played well enough in a reserve role as a freshman to be named the Aggies' top defensive newcomer at the team's banquet. The 6-4, 325-pound Brown figures to take on a much a larger role this fall. Brown and returning starter Justin Madubuike should give Texas A&M a dynamic tandem at defensive tackle.

This story has been corrected to show that Demetris Robertson had four carries for 109 yards and no catches, not four catches for 109 yards, last year.