At 3-3, Orange hoping for second-half surge 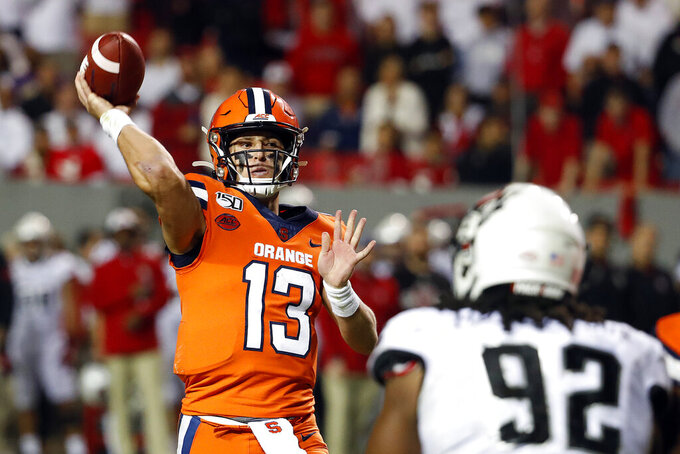 Syracuse's Tommy DeVito (13) attempts a pass over the rush of North Carolina State's Larrell Murchison (92) during the second half of an NCAA college football game in Raleigh, N.C., Thursday, Oct. 10, 2019. (AP Photo/Karl B DeBlaker)

Halfway through his fourth season at Syracuse, coach Dino Babers is happy to ignore the recent past and focus on what lies ahead.

Ranked in the preseason AP Top 25 with high expectations after a breakthrough 10-win season, the Orange (3-3, 0-2 Atlantic Coast Conference) certainly haven't looked like the team picked to finish second to Clemson in the Atlantic Division. They host longtime rival Pittsburgh (4-2, 1-1) in a pivotal game on Friday night seeking their third straight win in the Carrier Dome since a disheartening home loss to the Tigers before a packed house in mid-September.

"I'm not happy with how things have gone, but now that all of that stuff is behind us and there is no rose-colored glasses, this is what we are. Now, get better."

Syracuse is coming off a 16-10 loss at North Carolina State on Thursday night, a game the Orange failed to score until the final seconds of the third quarter (a 32-yard field goal by Andre Szmyt) and tallied their lone touchdown with 3 minutes left.

Not the sort of offense Babers is accustomed to.

That fluff departed after a 63-20 loss at Maryland in the second game of the season and a 41-6 beatdown by Clemson the following week. The Orange's victories came against Liberty on the road and Western Michigan and Championship Subdivision foe Holy Cross in the Carrier Dome.

Syracuse also has remaining home games against Boston College and Wake Forest and travels to Florida State, Duke and Louisville in the quest to reach the six victories needed to land a second straight bowl berth.

"This is where I get excited. We can either be what everyone says we are or we can go out and prove them wrong and be someone totally different," Babers said. "It is going to take a lot of work because it is not like you can just flip that light switch. What you see is what we are right now, doesn't mean we have to stay there."

Injuries to key players have hampered performance on both sides of the ball. The offense behind first-year starter Tommy DeVito, a redshirt sophomore, has shown glimpses of its potential. Wideout Trishton Jackson has surpassed 100 yards receiving three times and has three straight games with a touchdown. On the season, the Michigan State transfer has 33 receptions for 499 yards and six scores, is tied with Szmyt for the team lead in scoring, and ranks fifth in the ACC in receiving yards per game (83.2).

Although DeVito has thrown nine TD passes in the past three games with one interception, he's been hesitant and sacked an awful lot behind an injury-plagued line — eight times against both Clemson and North Carolina State and 26 times overall. He's 139 of 215 for 1,551 yards and 12 TDs passing with five interceptions this season.

Babers had a heart-to-heart talk with DeVito on the field after the loss to N.C. State.

"A lot of reflection. We were talking about his growth," Babers said. "You need immediate feedback, positive and negative, so that you can make the adjustments.

The backup is redshirt senior Clayton Welch, a junior college transfer who has yet to throw a pass for the Orange.

One thing that remains a constant for the Orange is their stellar special teams play. Punter Sterling Hofrichter has a net punting average of 45.2 yards, second nationally, and has placed 18 of his 37 punts inside the opponent's 20, the best mark in the ACC.

Szmyt, a walk-on who was chosen the best kicker in the nation last season, is 6 of 7 on field goals and has missed one extra point.