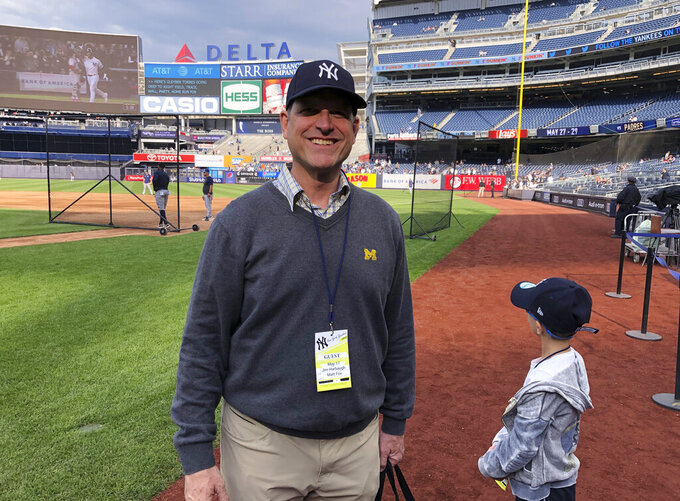 Michigan football coach Jim Harbaugh and his son, Jack, stand on the field at Yankee Stadium before the New York Yankees' baseball game against the Tampa Bay Rays on Friday, May 17, 2019, in New York. Shaking hands and posing for photos on the field during batting practice, Harbaugh wore a Yankees cap, a Michigan sweater vest and — of course — a crisp pair of khakis. He says he and his father had never been to Yankee Stadium before and it's a "bucket list" trip for them. Harbaugh, a lifelong baseball fan, grew up rooting for the Detroit Tigers while his father was an assistant coach under Bo Schembechler at Michigan. (AP Photo/Mike Fitzpatrick)

NEW YORK (AP) — Jim Harbaugh is in a New York sports state of mind this weekend.

Michigan's football coach visited Yankee Stadium for the first time Friday, joined by his father and 6-year-old son to watch the Bronx Bombers take on the Tampa Bay Rays with first place at stake in the AL East.

After that, the three generations of Harbaugh boys are headed out to Long Island on Saturday to catch some major golf at the PGA Championship.

"I haven't got much sleep the last couple nights thinking that we were coming to Yankee Stadium," Harbaugh said. "I think I'm more excited than my son, Jack, and I think my dad's even more excited than I am. This is a big thrill."

Shaking hands and posing for photos on the field during batting practice, Jim Harbaugh wore a Yankees cap, a Michigan sweater and — of course — a crisp pair of khakis with sneakers. He called it a "bucket list" trip for the family.

"This is a huge highlight because none of us have been to Yankee Stadium. This is great," he said. "It's gorgeous. Just gorgeous. Unbelievable."

What part of the entire experience was he most excited about?

"I always look forward to getting a foul ball opportunity," Jim Harbaugh said. "I've got my glove. I've gotten 20 legitimate foul balls or home runs during a game."

A lifelong baseball fan, Jim Harbaugh grew up rooting for the Detroit Tigers while his father, also named Jack, was an assistant coach under Bo Schembechler at Michigan in the 1970s.

"Actually, they're in Detroit tonight. We would have been there, but this was an amazing opportunity," Jim Harbaugh said. "This is pretty awesome."

The older Jack Harbaugh got a big kick out of chatting with Yankees manager Aaron Boone, whose grandfather, Ray, was an infielder for the Cleveland Indians from 1948-53 when the 79-year-old Harbaugh grew up in Ohio pulling for them.

Jim Harbaugh said he was given the baseball tickets by umpire Ted Barrett, who worked third base Friday night as the Yankees rallied for three runs in the bottom of the ninth inning to win the series opener 4-3. Jim Harbaugh said he and Barrett played multiple sports against each other as high schoolers in California.

During his own long career, Jack Harbaugh was a head coach at Western Michigan and Western Kentucky, where he won the 2002 NCAA Division I-AA championship. He wore a Baltimore Ravens sweatshirt — a nod to the NFL team son John coaches.

Jack Harbaugh said his grandson is a big Yankees and Aaron Judge fan.

"It's a thrill watching him taking it all in," Jim Harbaugh said.

The elder Harbaugh recalled his son trying to recruit the 6-foot-7, 282-pound Judge to play football at Stanford when Jim Harbaugh coached the Cardinal.

Of course, the All-Star slugger chose baseball instead.

"Looking back, probably a good decision," grandpa Jack said with a smile.