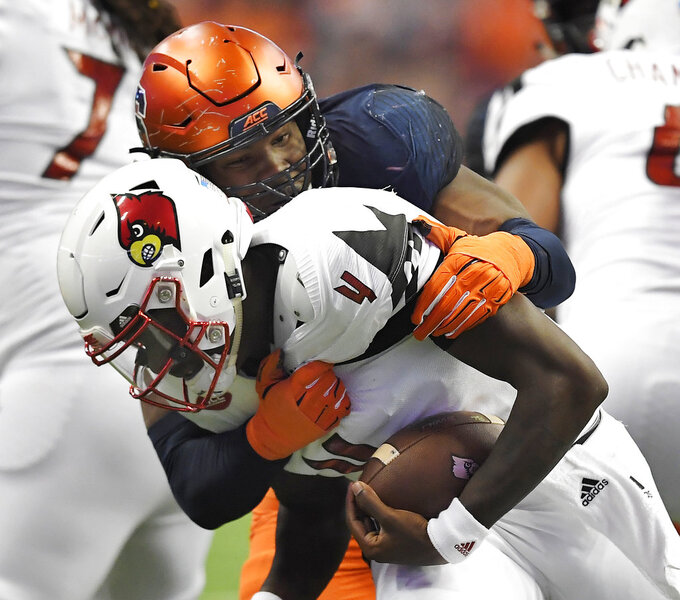 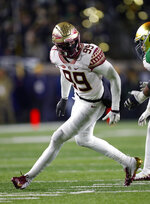 Clelin Ferrell's pass-rushing prowess has helped put No. 2 Clemson on the cusp of its fourth consecutive Atlantic Coast Conference championship and another berth in the College Football Playoff.

The 6-foot-4, 265-pound junior end isn't the only Tiger thriving on a stingy defensive front four where he and Austin Bryant bookend tackles Dexter Lawrence and Christian Wilkins.

The ACC is littered with defensive playmakers all around the league.

Florida State's Brian Burns, Boston College's Wyatt Ray and Syracuse's Alton Robinson are tied for eighth in sacks with nine each. That's just a half-sack more than Ferrell, who's confident his total will rise over the final two weeks of the season.

"There's two things a defensive lineman always knows: How much he bench presses and how many sacks he has," said Ferrell, adding that he has pressed 405 pounds. "I'm at 8½ (sacks) right now. The year's going well, but I feel like there's another level I can take it to for my teammates."

Sacks aren't the only category where ACC players are making their presence felt.

Boston College's Hamp Cheevers is tied for first with six interceptions and leads a three-man ACC contingent in the top five. Virginia's Juan Thornhill and Syracuse's Andre Cisco are tied for third with five picks each.

The conference also has a significant presence in tackles for loss with five in the top 25 nationally. Two are at Miami: Senior Gerald Willis III (17) is tied for eighth and sophomore Jonathan Garvin (14.5) is tied for 18th. Syracuse junior Alton Robinson is tied for 15th with 15 while Burns, Ferrell and Boston College's Zach Allen are tied for 23rd with 13.5.

It doesn't stop there.

Hall jokes that Thornhill steals his interceptions, but adds that it's because his fellow Cavalier is all over the field.

"Ultimately, he's a playmaker," Hall said of Thornhill. "I like his game because anywhere you stick him on the defense, he's going to make plays and that just shows how smart he is."

There's no underestimating the value coaches place on a player with a keen instinct for the ball, such as the Seminoles' Burns.

"He's smart, first of all," Florida State defensive coordinator Harlon Barnett Barnett said. "A smart football player allows you to be an even better football player on all levels. If you have a great understanding of your opponent — the guy across from you and the scheme — and understanding certain situations (where) they like to do this and certain situations they like to do that. ... Now, your game can go to another level.

"He's a great example of that."

That type of play can also make teammates better. BC is a great example of that.

The Eagles' Ray has definitely thrived playing on the opposite end of Allen, who was the nation's only lineman with 100 tackles last season. Boston College coach Steve Addazio cites Allen as his biggest playmaker and praises Cheevers and Ray for making clutch plays, but notes that everybody's capable of contributing on an opportunistic unit.

"Those two guys have done a good job with (interceptions) and sacks, and both are athletic guys and experienced guys," he said. "But we have a number of those guys on our defense right now."

Clemson continues to set the defensive standard as it seeks a fourth consecutive ACC championship and second national title in three seasons.

The Tigers are tied for No. 1 nationally in scoring defense at 12.7 points per game and ranks second in yardage allowed at 253.6 yards per game. Clemson defensive coordinator Brent Venables stresses to players the importance of putting the team first, but said it's not a hard sell.

"It's been a selfless group," Venables said, "and as a result, there's been incredible success."