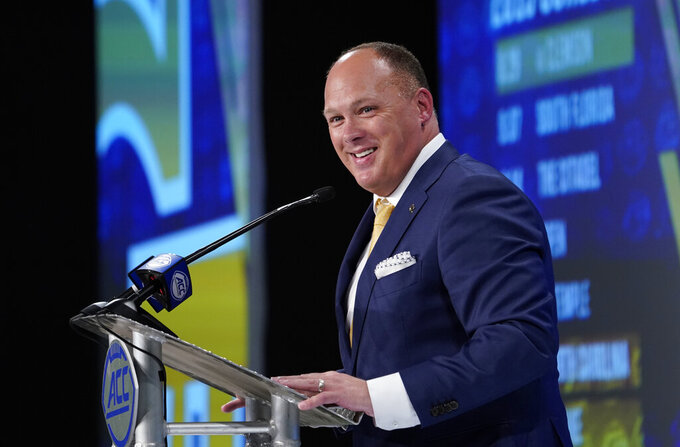 CHARLOTTE, N.C. (AP) — The Atlantic Coast Conference is roughly a month away from launching its new ESPN-partnered TV channel and still awaiting key deals with several cable providers to carry it.

The league and its schools need help from fans on that front.

Schools are posting messages on social media asking fans to contact cable providers and request them to carry the ACC Network ahead of its Aug. 22 launch. Several even have put messages atop their official athletics webpages urging fans to "demand" the network. And it's a frequent talking point for school officials.

In an interview with The Associated Press, league commissioner John Swofford said those are coordinated efforts in a strategy directed by Disney-owned ESPN.

"This is something where you reach a point in time where pros sort of take over," Swofford said Thursday during the ACC media days. "And the pros in this instance are ESPN distribution and Disney distribution. I think we've done our part and will continue to do our part at the institutional level and the conference level so we are a part of that. But you can only do so much, and that's where we are at this point in time."

ACC officials hope channel revenue closes a growing financial gap with its power-conference peers. The threshold for success remains unclear since the league hasn't publicized financial projections for the network.

There are deals in place with several providers, including direct-to-customer services such as Playstation Vue and Hulu. There are no deals in several key markets of the league's footprint, though Swofford has previously noted last-minute distribution deals are common in a process he called "stimulating" but also "stressful."

"This network is a big deal and it needs to work," Swofford said. "And I'm very confident that it will."

While North Carolina coach Mack Brown still plans to incorporate many of the principles of the "air raid offense," he said the Tar Heels also plan to place a huge emphasis on a power running game.

Brown said the Tar Heels probably should change the name.

"I watched it for 16 years at Texas with Mike Leach and with Kliff Kingsbury," Brown said. "The thing that was missing with them, in my estimation, was the power running game. What happened with Lincoln Riley at Oklahoma, what happened with Phil Longo at Ole Miss is they're taking the air raid concepts, spreading people out, but they're running the football. They have two backs in a lot of cases or a tight end. It's still the old power running game. I love the combination of both."

UNC hasn't decided on a quarterback yet with Sam Howell, Cade Fortin and Jace Ruder competing for the job.

New Georgia Tech coach Geoff Collins was so excited to become the head coach at Georgia Tech and return to the Southeast after two years at Temple that he ate breakfast at the Waffle House his first nine days on the job.

"There's 400 Waffle Houses in the state of Georgia," Collins said excitedly. The fact that everybody loves Waffle House, at least I know I do, and a lot of those guys are Georgia Tech graduates, it's been a really neat thing."

Virginia Tech coach Justin Fuente is waiting to hear if Oregon transfer Braxton Burmeister will be eligible to play this season before naming a starting quarterback. Burmeister is petitioning the NCAA for immediate eligibility, but there has not been a ruling yet. Fuente expects one fairly soon.

Junior Ryan Willis would appear to be the frontrunner for the job if Burmeister isn't eligible.

"I promised those guys opportunities to compete for the job," Fuente said. "I don't think it would be wise of me to close the job before I know who's eligible to compete for it."