ACC's Coastal Division once again appears up for grabs 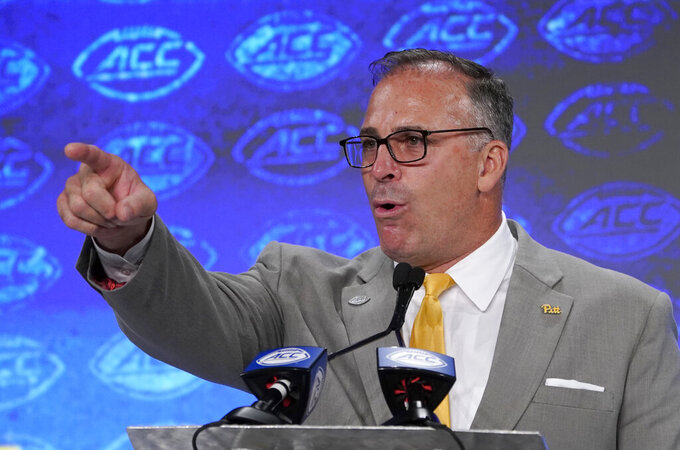 CHARLOTTE, N.C. (AP) — Virginia coach Bronco Mendenhall doesn't need to be reminded that the Cavaliers are the only team in the ACC Coastal Division that hasn't won the division title in the last six seasons.

They have a chance this year, but the division seems to be once again up for grabs.

"Yes, it would be nice for us to clean up this nice little package and become the seventh team different team to win the Coastal, but it doesn't always work like that," Mendenhall said Thursday during the second day of ACC media days.

Virginia is coming off an eight-win season, has a returning quarterback in Bryce Perkins, nine starters back on defense and is one of only four teams in the division NOT starting over with a new head coach.

The Cavaliers might be favored to win the Coastal Division, but Mendenhall knows his team "has to earn it."

"We have confidence," Mendenhall said. "We have an expectation that that's what we're capable of."

Perkins said Virginia has the talent to win the division and the mindset.

"It's going to be a factor of how hard we play in late season games, how competitive and ferocious we are when we take the field in those games," the Virginia quarterback said. "That's going to be the determining factor."

While defending national champion Clemson has dominated the ACC's Atlantic Division — and the conference as a whole — the Coastal remains as unpredictable as ever.

Pittsburgh, Miami, Virginia Tech, North Carolina, Duke and Georgia Tech have all won titles in the last six seasons as there is no foreseeable favorite. Adding to the intrigue is the division features three new coaches in North Carolina's Mack Brown, Miami's Manny Diaz and Georgia Tech's Geoff Collins.

"You could take the Coastal Division and pick it one through seven, then flip it over, and somebody else could take the seven down through one and have just as good a chance of being right as the person that picked first," Cutcliffe said.

Duke should be competitive with fifth-year senior quarterback Quentin Harris inheriting the reigns from first-round draft pick Daniel Jones. North Carolina is likely on the rise, too.

Of course, that may be more of a curse since no team has repeated as division champion since Virginia Tech in 2010 and 2011.

Narduzzi said he wouldn't even begin to try to pick a winner this year.

The ACC preseason predictions for the 2019 season will be announced in the upcoming days, and it's anybody's guess which team will collect the most votes. Cutcliffe said one thing is for sure — there aren't any easy games in the division anymore.

"That's when you know you've arrived as a conference," Cutcliffe said of the level of competition. "We want to make all of your guys' jobs (in the media) really tough in picking a champion."

Then he turned to the voting media members and said, "Don't change your (preseason) pick halfway through now. I want to document all of these picks, OK?"