After 10-4 finish, Longhorns have to plug up defense 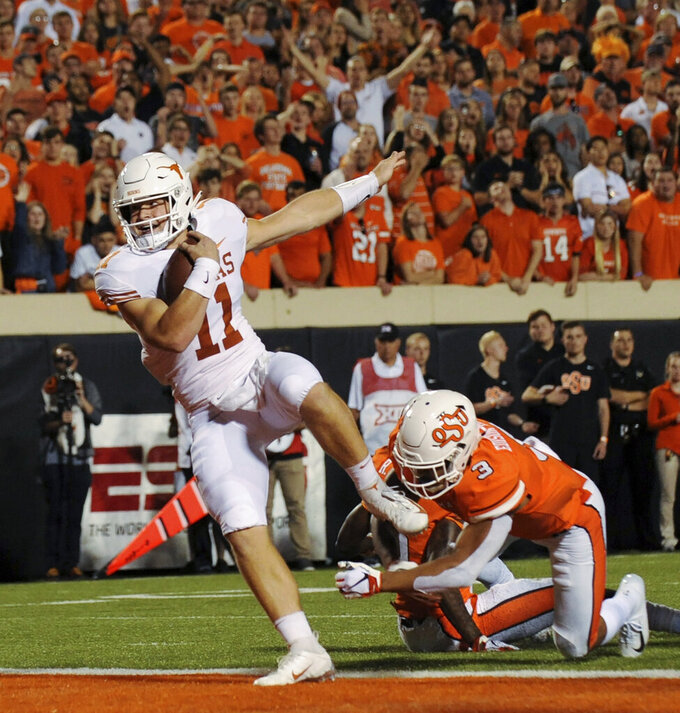 FILE - In this Oct. 27, 2018, file photo, Texas quarterback Sam Ehlinger (11) scores a touchdown after escaping from Oklahoma State safety Kenneth Edison-McGruder in the first half of an NCAA college football game, in Stillwater, Okla. Texas has a rising star in quarterback Sam Ehlinger who will get some attention for the Heisman Trophy if he can duplicate his impressive 2018 season when he passed for 25 touchdowns and ran for 16 more. (AP Photo/Brody Schmidt, File)

AUSTIN, Texas (AP) — A 10-4 finish with a big win in the Sugar Bowl energized Texas football to levels not seen in years.

Now the program needs to keep it from leaking right back out through the gaping holes across the lineup.

Texas concludes spring practices with its annual Orange-White scrimmage Saturday night. Coach Tom Herman has spent the last few weeks sizing up who will plug the gaps on a defense that lost eight starters.

Offensively, Texas has a rising star in quarterback Sam Ehlinger who will get some attention for the Heisman Trophy if he can duplicate his impressive 2018, when he passed for 25 touchdowns and ran for 16 more. But there are multiple questions on that side of the ball as well, most notably who will be catching passes from Ehlinger.

"We've got to develop leadership, especially on defense," Herman said. "There's a lot of young guys who are now running with the (starters) and they are used to standing on the sidelines watching. ... Some of the guys who had been vocal leaders (are gone). That's going to be the most difficult part."

Texas starts the 2019 season Aug. 31 at home against Louisiana Tech.

Lil'Jordan Humphrey left for the NFL, leaving 6-foot-6 senior Collin Johnson as Ehlinger's favorite target. Johnson had 68 catches for 985 yards and his size makes him a matchup nightmare for Big 12 cornerbacks. Johnson flirted with bolting for the NFL, but opted to stay in college.

Ehlinger is a tough runner but he hasn't proven particularly durable and has missed several games with injuries his first two seasons. Texas had the luxury of turning to former starter Shane Buechele to guide the Longhorns to critical wins over Baylor and Iowa State last season. Not anymore. Buechele has transferred and so did former top recruit Cameron Rising. That leaves sophomore Casey Thompson as the top backup, and he had to fill in with the starters in spring drills when Ehlinger was out sick.

Most of the starting defense has to be replaced. Texas had the Big 12 defensive lineman of the year in back-to-back seasons in Poona Ford (2017) and Charles Omenihu (2018). The Longhorns need a run stopper and edge rusher to emerge by next fall. The only three returning starters are safeties Brandon Jones and Caden Sterns and linebacker Jeffrey McCulloch. But Jones (ankle) and Sterns (knee) both had their spring workouts cut short because of surgery. Both are expected to be ready for the season.

Freshman linebacker De'Gabriel Floyd was expected to provide immediate help but was diagnosed with spinal stenosis, a narrowing of the spinal column, which will keep him out of football until at least January 2020 while he undergoes further evaluation.

Keaontay Ingram is the top returning rusher after a freshman season with 708 yards and three touchdowns. Herman has raised expectations that early enrollee freshman Jordan Whittington, one of the nation's top-rated athlete prospects, will provide immediate help. Another top running back recruit, Derrian Brown, was hospitalized in Georgia in January with an undisclosed medical issue.

The freshman athlete from California was a top recruiting target for Texas, which finally got him as a transfer. McCoy initially signed and enrolled at Southern California. He is still waiting to be declared eligible for the 2019 season, but has been participating in spring drills.