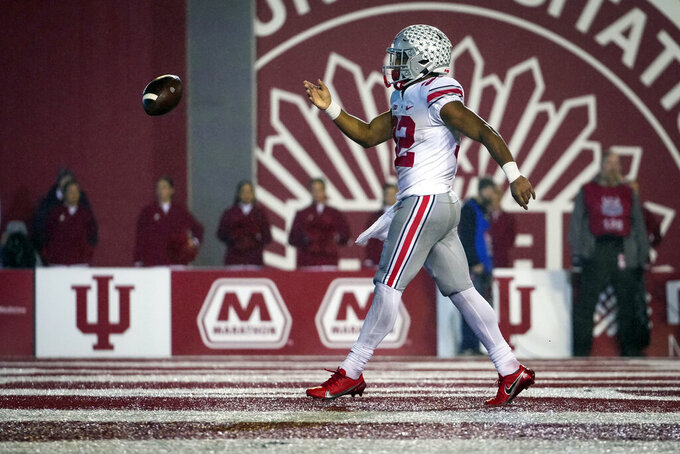 Ohio State running back TreVeyon Henderson (32) flips the ball after scoring a touchdown against Indiana in the first half during an NCAA college football game in Bloomington, Ind., Saturday, Oct. 23, 2021. (AP Photo/AJ Mast)

At this point it would be bigger news if Stroud — or some other Buckeyes freshman — doesn't take home the honor every week.

Stroud has the No. 5 Buckeyes (6-1, 4-0 Big Ten) back on track after an early stumble and steamrolling through the conference schedule.

Now comes No. 20 Penn State for a Saturday night clash that lost a good deal of its luster after the Nittany Lions lost a baffling nine-overtime game to lowly Illinois last week that sent them tumbling 13 spots in the AP Top 25.

That has Penn State (5-2, 2-2), an 18 1/2-point underdog, trying to bounce back after two straight losses that have generated a vitriolic avalanche of social media griping and second-guessing.

“There’s a lot of noise out there. There always is,” coach James Franklin said. “This is college football. When things are going well everybody is patting you on the back. When you have a loss there’s challenges that come with that, there’s criticism that comes with that. I thought we had a really good practice and meeting on Sunday and discussed those things in detail. And I think our guys have responded well.”

Defensive end Arnold Ebiketie said the loss hurt, especially given that Penn State squandered multiple chances to win. But there is no time to dwell on it.

“We have a lot of football left in front of us,” Ebiketie said. “Last week didn’t go our way. We’re not going to put our heads down. We’re just going to keep fighting because we know what we’re capable of doing.”

The good news for Franklin is that he expects Sean Clifford to be 100% on Saturday. The senior quarterback suffered an unspecified injury in the loss to Iowa on Oct. 9. After a bye week, he was able to play against Illinois but evidently was limited.

"Sean is much further ahead now to being back to 100%, so that’s a positive," Franklin said. "We feel really good about that."

With a lot of football left, Clifford said he will try to be wary of his health.

“But at the same time, I’m going to have to make the plays that are there,” he said. "And if that means sacrificing my body for a first down or a touchdown, I’m going to do it.”

The Buckeyes' 54-7 beatdown of Indiana in terrible weather last week added to their best-in-the-nation offensive stats behind Stroud, who is being talked about as a possible Heisman Trophy candidate. It helps that he plays with one of the best wide receiver tandems in the country, Chris Olave and Garrett Wilson, and a prodigy running back in freshman TreVeyon Henderson.

Henderson’s numbers don’t reflect how dynamic the 5-foot-10, 210-pounder has been. That’s because he’s done most of his damage early before sitting out in the second half of blowouts. In his breakout game against Tulsa on Sept. 9, the Hopewell, Virginia, native rushed for a freshman school record 277 yards and three touchdowns. Last week he got nine carries for 81 yards and two touchdowns, and also caught a TD pass. The telling stat: His 8.79 yards-per-carry average leads the nation.

Penn State’s defense, if it can play up to par again after allowing 395 yards to the rush-heavy Illini, will be the best Ohio State has seen this season. The unit is sixth in the country in scoring defense, allowing just 14.7 points a game, and has given up just nine touchdowns. Penn State is 26th nationally in total defense and is allowing 178 passing yards per game. Ohio State is averaging 352 yards through the air.

“Penn State was just in one of those funks. And to think that they’ve forgotten how to play football is ludicrous,” ESPN college football analyst Kirk Herbstreit said this week. “Too much pride on that roster. Too much talent on that roster. They have been backed into a corner. They have a chance to salvage their season by beating Ohio State in Columbus. I expect them to be the kind of team you would expect them to be, and not the team that played against Illinois last week.”

Ohio State running back Marcus Crowley will be out long term with an unspecified injury. Running back Master Teague III is expected to play after being unavailable last week.