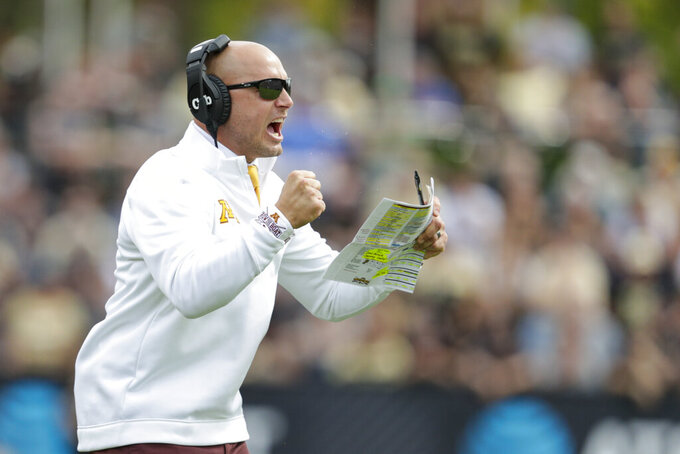 MINNEAPOLIS (AP) — The pressure came quickly at Tanner Morgan from two Purdue rushers, with time in the second quarter ticking down toward a minute remaining and Minnesota moving into scoring range.

The sophomore quarterback, realizing the significant setback that would have been caused by a sack yet determined to avoid a turnover and keep the drive going, got rid of the ball right before he was hit and sent it harmlessly into the middle of the field where wide receiver Chris Autman-Bell would have been had his slant route been given another second.

Morgan shrugged off the miss and connected on his next four throws, the last one a textbook toss for a fade that Tyler Johnson had run to the corner of the end zone that gave the Gophers a 28-10 lead.

So about that incompletion: It was the only one Morgan had in the entire game, a 38-31 victory on the road Saturday in the Big Ten opener. Still, after his 21-for-22, 396-yard, four-touchdown performance against the Boilermakers, Morgan had the audacity to tell coach P.J. Fleck he has to improve his play.

"Because I do. There's a lot of things I need to clean up, a lot of protection calls and pocket movement as well," said Morgan, the Big Ten Offensive Player of the Week. "I've just got to be better in a lot of areas."

Morgan's yardage total was the seventh-highest in program history, the most by a Gophers quarterback in 10 years since Adam Weber passed for 416 yards in a win at home over Michigan State. Morgan, who took a redshirt in Fleck's first year at Minnesota and took over as the starter for an injured Zack Annexstad halfway through last season, is 8-2 as a starter.

"We're walking off the field together, and he looks at me and says, 'I can be better,'" Fleck said. "I said, 'I have to tell you that. You don't tell me that right after the game. You're not the one to say that. That's for Sunday. Let's celebrate now.' But that's the way our players are thinking. They constantly go back to what we can do better. That's the focus of the program. I know it sounds cliche and coach speak, and it's not fancy in the media, but that's how we run the program."

Here are some key angles surrounding the game:

The Illini racked up 646 total yards last season in a 55-31 victory at home over Minnesota, prompting Fleck to fire defensive coordinator Robb Smith the following day. Reggie Corbin, who's third in the Big Ten this year in rushing with an average of 104.7 yards per game, ran for a career-high 213 yards in that game on only 13 carries that included a 72-yard touchdown romp on the second snap for Illinois.

After Joe Rossi was promoted to replace Smith, the Gophers allowed only 59 points over their final four games, winning three.

"It's something you don't like to see. But like Rossi always says, there's nothing that we changed. We still run the same defense. It was just our details went way up and how we practice on defense changed," senior linebacker Thomas Barber said. "Being kind of mean guys to the scout teams, tackling harder, being more physical with them, not tagging off, so that's really one thing he emphasized when he took over."

Corbin, the Illinois senior, became the 18th player in program history to reach the 2,000-yard rushing mark. With a robust average of 7.14 yards per carry, Corbin leads the Big Ten and ranks 13th in the FBS.

Illini defensive end Oluwole Betiku Jr., a graduate transfer from USC, leads the FBS with an average of 1.75 sacks per game and 2.6 tackles for loss per game. With seven sacks this season, he's already equaled or surpassed the Illinois team leader for the season in 18 of the last 23 years.

INTO THE GREAT WIDE OPEN

Minnesota will test a pilot program during homecoming weekend, with recreational vehicles allowed to park overnight Friday and Saturday at a surface lot on the east side of the stadium. It's sold out. It's also the latest wrinkle the athletic department has unveiled to try to boost fan interest and game attendance.