After first loss, No. 13 WVU looks to bounce back vs Bears 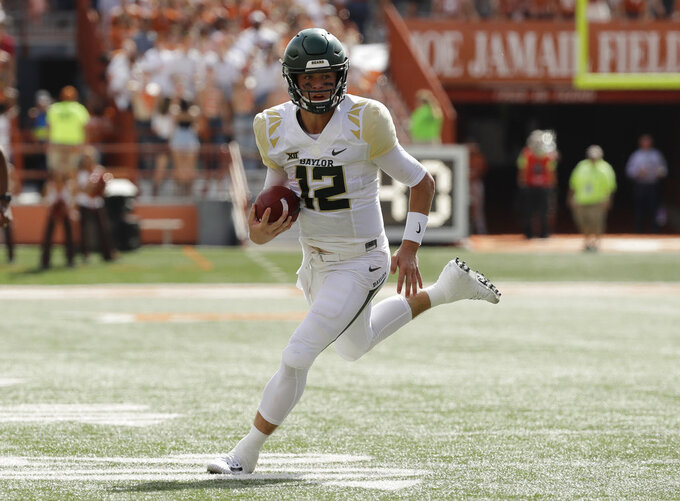 FILE - In this Saturday, Oct. 13, 2018 file photo, Baylor quarterback Charlie Brewer (12) during the first half of an NCAA college football game against Texas in Austin, Texas. Brewer had a chance to give Baylor the lead in the closing seconds at Texas two weeks ago but came up just short. He almost pulled off a miracle comeback last year against West Virginia. Baylor plays West Virginia on Thursday night in Morgantown, W.Va.(AP Photo/Eric Gay, File)

MORGANTOWN, W.Va. (AP) — No. 13 West Virginia is well aware that Baylor quarterback Charlie Brewer is a pain to contain.

Brewer almost pulled off a miracle comeback as a freshman against the Mountaineers (5-1, 3-1 Big 12), who are hoping for anything but a repeat when they host the Bears (4-3, 2-2) on Thursday night.

Last year Brewer replaced Zach Smith at the start of the fourth quarter against West Virginia with Baylor down 38-13. He rushed for 48 yards and threw two touchdown passes. But with 17 seconds left, Brewer was sacked on a two-point conversion attempt and the Mountaineers escaped with a 38-36 win .

"Brewer creates so many different things for them," said West Virginia defensive coordinator Tony Gibson. "If you're covering guys downfield, he's going to take off on you. He will keep plays alive, and we have to be careful that we're not coming off guys too early, because he can still throw it. He's dangerous."

Brewer also came up a bit short two weeks ago when he drove Baylor to the Texas 17 with the final seconds ticking down. He rushed his final three passes under intense pressure and the sixth-ranked Longhorns held on to win 23-17.

But he's been on the winning end of last-minute drives, too, taking the Bears the length of the field before getting a 29-yard field goal with eight seconds left to beat Kansas State 37-34 on Oct. 6.

West Virginia is still smarting from its failure to corral Iowa State quarterback Brock Purdy and running back David Montgomery two weeks ago. Gibson said he counted 31 missed tackles in the 30-14 loss .

Iowa State ran the ball 47 times and averaged 5.2 yards per attempt to keep West Virginia's potent offense on the sidelines. Baylor coach Matt Rhule isn't sure if the Bears can match that.

"In my old life, I would have lined up and tried to run the ball every play," he said. "That's just not really who we are. We're a little more spread and tempo. I owe it to our players to let them go play the way we play best. But it'd be great if we could keep them off the field."

Here's some other things to know when the Mountaineers and Bears meet:

West Virginia's offense has been terrible after halftime in three of its four Big 12 contests, getting shut out at Iowa State and Texas Tech and failing to score over the final 22 minutes against Kansas State.

CHARLIE AND THE QB FACTORY

Baylor running backs coach Jeff Nixon was a running back at West Virginia in 1993 and 1994 before transferring to Penn State, where Rhule also played linebacker. Rhule said he grew up a fan of the Backyard Brawl between West Virginia and Pittsburgh.

The connection to West Virginia didn't end there.

"Then, I married my lovely wife Julie whose parents are both Mountaineers," Rhule said.

Baylor's defense has forced just six turnovers all season and Rhule believes getting some against West Virginia could make a difference.

"This is a dynamic offense," he said. "We have to try to create some negative plays. I think our defense is definitely improving, but we have got to create some turnovers and get to the quarterback if we want to come out with a win."

West Virginia cornerback Derek Pitts returned a blocked field goal for a TD at Iowa State but injured a knee later in the game. Coach Dana Holgorsen had no timetable for his return.