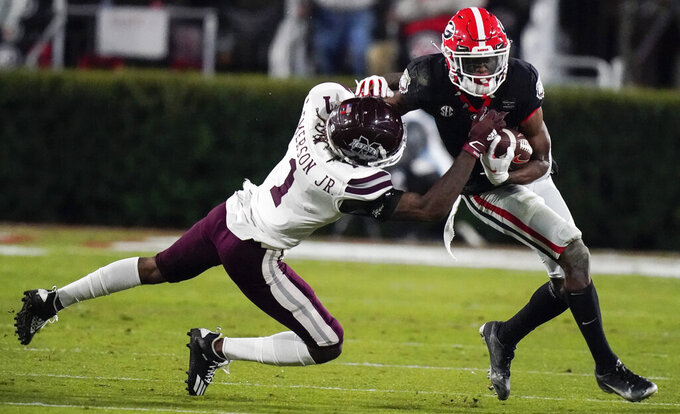 FILE -Mississippi State cornerback Martin Emerson, left, tackles Georgia wide receiver George Pickens during the first half of an NCAA college football game Saturday, Nov. 21, 2020, in Athens, Ga. Georgia wide receiver George Pickens still has a chance to be a major contributor for the Bulldogs this season. The junior who was expected to be third-ranked Georgia's go-to receiver before he tore the ACL in his right knee during spring practice will be available Friday, Dec. 31, 2021 for the College Football Playoff semifinal at the Orange Bowl against No. 2 Michigan. (AP Photo/Brynn Anderson, File)

FORT LAUDERDALE, Fla. (AP) — Georgia wide receiver George Pickens still has a chance to be a major contributor for the Bulldogs this season.

The junior who was expected to be third-ranked Georgia's go-to receiver before he tore the ACL in his right knee during spring practice will be available Friday for the College Football Playoff semifinal at the Orange Bowl against No. 2 Michigan.

Pickens did not travel with the team to Miami on Sunday, instead arriving Monday. Georgia would not say why Pickens and quarterback JT Daniels arrived a day late, but both are expected to be ready to play.

“When I think back to the spring when he injured his knee and thinking, wow, what a disappointment for him and his development and for us,” Georgia offensive coordinator Todd Monken said Tuesday. "But he has done a fantastic job of trying to get back.

Pickens was able to play against Georgia Tech in the regular-season finally and Alabama in the Southeastern Conference championship game. He made three catches, two against the Tide.

The 6-foot-3, 200 pounder from Hoover, Alabama, has maybe the highest ceiling of any Georgia wideout and he's been especially good in bowl games.

Last year, he had seven catches for 135 yards and a touchdown against Cincinnati in the Peach Bowl. He ended his freshman season with a career-high 12 catches for 175 yards in Georgia's Sugar Bowl victory against Baylor.

It might a stretch to think Pickens can be that type of an impact player against Michigan, but for a team that has relied heavily on inexperienced receivers all season any contribution would be welcome.

“He’s been a great addition to this team, him being able to come back from that injury has been tremendous for not only for himself, but for the team, as well, and just him being out there brings a different atmosphere to the game,” fellow receiver Kearis Jackson said.

Michigan linebacker David Ojabo has had one of college football's best breakout seasons.

The junior had played 20 snaps for the Wolverines coming into the season, but has blossomed as an edge rushing outside linebacker in new defensive coordinator Mike Macdonald's scheme e in 2021. Ojabo has 11 sacks, is a second-team All-American and a legitimate NFL prospect now.

“When it comes time for the draft time, draft attention, I’m going to switch the focus to that, but you see us, we’re in the playoffs. Can’t be talking about the draft or focusing on the draft,” Ojabo said.

The 6-5, 250-pound Ojabo is a latecomer to football. Born in Nigeria, he grew up in Scotland, where his parents still live. He moved to New Jersey and started playing football as a teenager.

Victor and Ngor Ojabo got to see their son play in person for the first time in November when Michigan beat Ohio State in Ann Arbor.

Ojabo said his parents are not making the trip to South Florida, but his brother will be in town.

Ojabo has a great role model in fellow Michigan edge rusher Aidan Hutchinson, who was the Heisman Trophy runner-up. Ojabo said he has tried to be in Hutchinson's “hip pocket” this year, trying to approach the game with the same work ethic and commitment.

His rise has been startling to observers, but not to him.

“No, it hasn’t surprised me because at the end of the day I know the work I put in,” Ojabo said.

Darrian Beavers has a tattoo of Cincinnati’s skyline on his left bicep, and was glad to come home to play after his final three college seasons after starting out at UConn.

Beavers, a graduate linebacker, is one of 27 players on the Bearcats roster listed as being from Cincinnati. He is among a team-high five from Colerain High School.

“Give a lot of credit to Colerain. I feel like they prepare their players well for the next level,” Beavers said Wednesday after showing off the muscular artwork. “The workouts, the intensity in practice, the competition that we play in Cincinnati, I feel like all of those factors factor in how we perform on the next level in college.”

Three of the Colerain alums play key roles on defense for the undefeated Bearcats: Beavers has 91 tackles, sophomore linebacker DeShawn Pace has 85 with a team-high four interceptions while starting only four games, and starting safety Ja’Vone Hicks has 48 tackles.

Beavers is one of five current Bearcat players from Cincinnati high schools who started their college careers at other schools.

“It’s been a blessing. I grew up here,” Beavers said. “Cincinnati’s in my blood, so I feel like the recognition that this city has gotten from this football team has been extraordinary. It has put the program on the map, it’s put the players on the map ... I feel like it’s put this whole city on the map.”

Alabama offensive coordinator Bill O'Brien was sidelined for a few days during the Crimson Tide's preparation for the Cotton Bowl against No. 4 Cincinnati by COVID-19.

The 52-year-old former Houston Texans and Penn State coach arrived in Miami on Tuesday, getting back a few days earlier than originally expected after the CDC lowered the recommended isolation time for those infected by COVID-19 from 10 to five days.

O'Brien said after working remotely for much of 2020, doing it a again for a few days wasn't so tough.

“Every meeting, every practice I was able to be involved with,” O'Brien said. “So it was really, really good back in Tuscaloosa for me, but I’m obviously excited to be here right now.”

O'Brien succeeded Joe Paterno at Penn State in 2012 and spent two seasons there before becoming an NFL head coach. He had previously worked with the New England Patriots for five years (2007-11), the final three as quarterbacks coach for Tom Brady.

The question O'Brien said he gets a lot —- though not in interview sessions because neither Alabama's Nick Saban nor New England's Bill Belichik allow assistant coaches to regularly meet with reporters —- is how do the two coaching greats and their programs compare?

“I take a lot of pride in working for two of the greatest coaches of all time in any sport,” O'Brien said. “Coach Belichick, Coach Saban, I’ve learned so much from from both of them. And there’s some fundamentals that they both believe in: Hard work, trust, loyalty. You know, smart football teams, teams that play selfless, complementary football.”

O'Brien said after he was fired by the Texans last year, ending a seven-year run in Houston, the call he got from Saban to come to Alabama was the only job offer he received.

“And I’m grateful for the opportunity that I’ve had,” O'Brien said. “I think you can count on one hand how many people can say they worked for both guys, and I’m just extremely proud of that.”

The biggest challenge for O'Brien in coming to Alabama was learning the offense.

“When you come here, you know you’re running Alabama's offense, you’re not bringing your offense in here, and it’s a great offense, with a great history and it was really awesome to learn it, but it was very challenging,” he said.

AP Sports Writer Stephen Hawkins in Forth Worth, Texas, contributed.