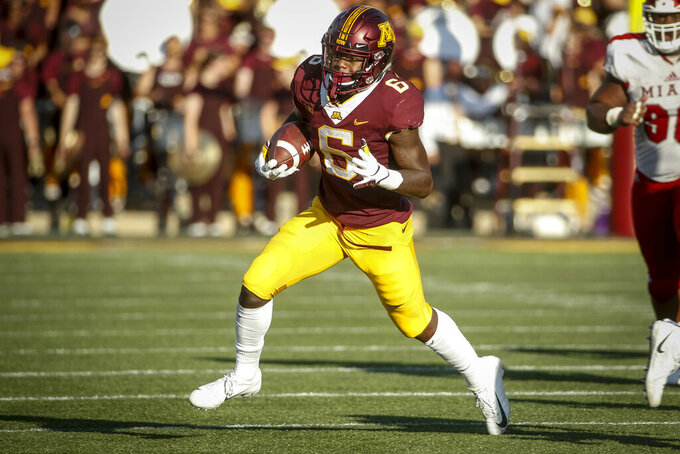 FILE - In this Sept. 15, 2018, file photo, Minnesota wide receiver Tyler Johnson catches a pass against Miami (Ohio) in the second half of an NCAA football game in Minneapolis. Minnesota returns a major portion of its offense from the strong finish to last season that featured a dominant victory at rival Wisconsin, led by wide receiver Tyler Johnson and running back Mohamed Ibrahim. (AP Photo/Bruce Kluckhohn, File)

MINNEAPOLIS (AP) — The long-languishing football program at Minnesota has experienced plenty of potential breakthroughs over the last half-century, only to plateau or regress in the games and years that followed.

Well, the Gophers have arrived at another pivotal season.

With Paul Bunyan's Axe returned to that often-empty trophy case thanks to a dominant victory at rival Wisconsin that highlighted a strong finish to 2018, they've established a benchmark for success under coach third-year coach P.J. Fleck. The natural next step would be to win their Big Ten West Division title.

The Gophers, using a roster with an FBS-high 58 players who were redshirt or true freshmen, blew out Georgia Tech in the Quick Lane Bowl after beating the Badgers for the first time since 2003.

"You try to keep that in the past and we know there's a whole new season now, but we know as a team what we can do and what we're capable of now," linebacker Thomas Barber said.

One of the standout rookies from last year, running back Mohamed Ibrahim, will be joined by seniors Rodney Smith and Shannon Brooks in their returns from knee injuries. Wide receiver Tyler Johnson put the NFL on hold to come back for his senior season. Safety Antoine Winfield Jr. is on the field again after a broken foot sidelined him last fall. The overall talent level here is as high as it's been in a long time.

"But just because we did something last year, that does not mean you're going to do something this year," Fleck said. "This year is not an extension of last year. That's not how we look at it. This is a team that's going to find its own ways to win."

OVER BEFORE IT BEGAN

Tanner Morgan took over at midseason for an injured Zack Annexstad, who originally won the quarterback job as a true freshman, and went 4-2 as the starter. Fleck planned to start the competition over again, but Annexstad suffered a serious foot injury in practice Aug. 2. Morgan, a third-year sophomore, completed 58.6% of his passes for the eighth-best single season rate in program history.

The Gophers brought three-fifths of their offensive line back, none bigger, literally, than right tackle Daniel Faalele. The 6-foot-9, 400-pound sophomore, a native of Australia, cracked the starting lineup in the sixth game of last season and made a major impact on the run blocking. Ibrahim racked up 696 yards and six touchdowns over the last five games. Guards Conner Olson and Blaise Andries have returned, too, with a move to center a possibility for Olson.

The most important improvement for the Gophers last year was on defense, where an average of 43.2 points and 507.7 yards allowed over the first six Big Ten games triggered the firing of coordinator Robb Smith. With Joe Rossi in place, they gave up only 59 points total over the final four games.

Though only a sophomore after a second straight medical redshirt, Winfield came from the same recruiting class as Coughlin, Barber and linebacker Kamal Martin, all Minnesota natives entering their final season. Along with fifth-year senior defensive end Winston DeLattiboudere, they'll form the backbone of the group.

The departed player likely to be missed the most is Emmit Carpenter, who left with the best field goal conversion rate (79.1 in program history. Last season, Carpenter made all 43 extra point attempts and 17 for 23 on field goals to finish fifth in the Big Ten in scoring. The Gophers won both of their games that were decided by one touchdown or less, and Carpenter was perfect in those contests including field goals of 50 and 53 yards in a 21-14 victory over Fresno State.

Brock Walker (redshirt freshman) and Michael Lantz (true freshman) have emerged as the front-runners for the job.

The nonconference schedule for 2019 is sneaky tough, with the opener on Aug. 29 against South Dakota State. The Jackrabbits, ranked third in one preseason FCS poll, reached the national semifinals last year. There is a road trip to Fresno State, which won the Mountain West Conference championship and finished 12-2. Georgia Southern, which went 10-3 last season, visits Sept. 14.

The Gophers have one of their most favorable Big Ten schedules since the two-division era began, however, with Rutgers on the road and Maryland and Penn State at home as the East Division crossover opponents instead of Michigan, Michigan State or Ohio State. Wisconsin must travel west this time to try to reclaim the Axe. The other away games are Purdue, Iowa and Northwestern, with Illinois and Nebraska coming to TCF Bank Stadium.