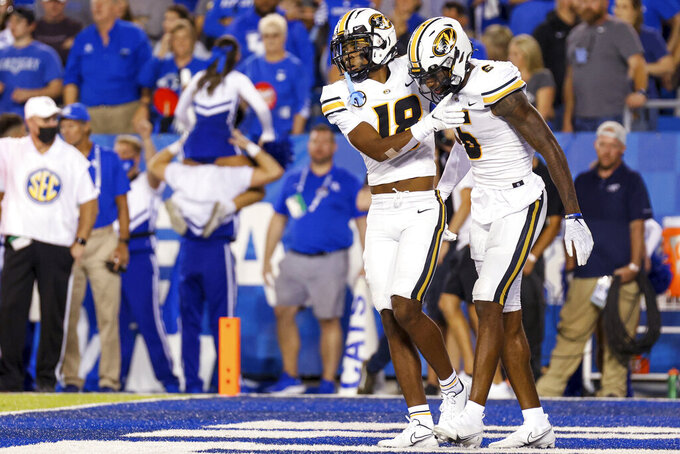 Missouri already has a couple high-profile wins under Eli Drinkwitz in just over one pandemic-shortened season, and the Tigers have been hauling in four- and five-star recruits like never before.

Yet their narrow loss at Kentucky last weekend was a reminder: The Tigers are still early in the building phase.

“The huge positive is as poorly as we played, if we make one more play we have a chance to win the game,” Drinkwitz said. "And that's a tribute to our team's refusal to give in, to continue to fight, scratch and claw all the way throughout the game.

“Those are the positive things,” Drinkwitz continued, “but we're still trying to figure out who we are.”

The next chance to do that comes Saturday against Southeast Missouri State (0-2).

“You've got to set expectations,” Drinkwitz said, “but you also have to have a reality of, this isn't a microwave, all of a sudden you're SEC East champions or you're competing in the SEC East. It's not Miracle Gro. You can say all the right things, outwardly be doing all the right things, but it's still a growth process.”

The Tigers (1-1) still have a young quarterback in Connor Bazelak, who has put up some gaudy numbers through his first season-plus as a starter. They have a slew of new faces on both sides of the ball, and on defense, the Tigers are still trying to get acclimated to the system run by longtime NFL coach Steve Wilks.

“We just didn't start fast (against Kentucky,” Tigers defensive back Martez Manuel said. “Then we found our rhythm but we put our offense in a bind. We didn't step up in the biggest moments that we needed to.”

The Tigers probably won't have many of those moments against Southeast Missouri State, which has one win — over Middle Tennessee — in 25 tries against Bowl Subdivision teams. This season, the Redhawks have been torched by Southern Illinois, the seventh-ranked team in FCS, and No. 1-ranked Sam Houston State.

“If you're really interested in improving and getting better, you're interested in having problems. Now we know where we have to get better,” Redhawks coach Tom Matukewicz said. “We can't get frustrated by the results and have that take away from our energy to be prepared. As long as we're excited and interested in getting better, we have a good chance.”

Tigers running back Tyler Badie ran for 203 yards in Week 1 against Central Michigan and, in Week 2, had 10 catches for 88 yards along with 61 yards rushing. Don't think Drinkwitz is worried about using him foo much, though.

“We would like to find some other people who can share the load in the backfield,” the Tigers' coach said, “but on the road against an SEC opponent, you got to ride your horses.”

SEMO OF THE SEC

The Redhawks are winless in seven tries against the Southeastern Conference, including four losses to the Tigers. They also have lost to Arkansas and Ole Miss, though they were competitive in a 31-13 loss to the Rebels in September 2013.

Despite its shortcomings last week, the Missouri defense has had a few impressive performances this season. Jaylon Carlies has interceptions in each of the first two games, the first to pull off that feat since Adam Sparks in 2017. Isaiah McGuire has sacks in three straight games dating to last season, and linebacker Blaze Alldredge followed his sack-filled performance against the Chippewas by blocking Kentucky's field-goal try in the fourth quarter.

OPTIMISM AHEAD OF THE OVC

If the Redhawks can take anything from tough FCS opponents the first two weeks and their trip to Missouri, it might be this: They almost certainly won't face anybody as tough as that trio of teams in the Ohio Valley Conference.

“We talk a lot about this being about the OVC, being ready for the OVC,” Matukewicz said. “What's the worst thing that can happen? We lose a game? We're blessed for this opportunity. It's a tremendous challenge.”

Drinkwitz was asked this week if the prospect of facing an FCS school meant an opportunity to play some of his young players and those buried on the depth chart. His reply: “The only way anybody is going to get a chance to play is if they earn the opportunity to play. This isn’t rec league. This is college football,” he said. “The best 11 players are going to play, the guys that give us a chance to win the game.”