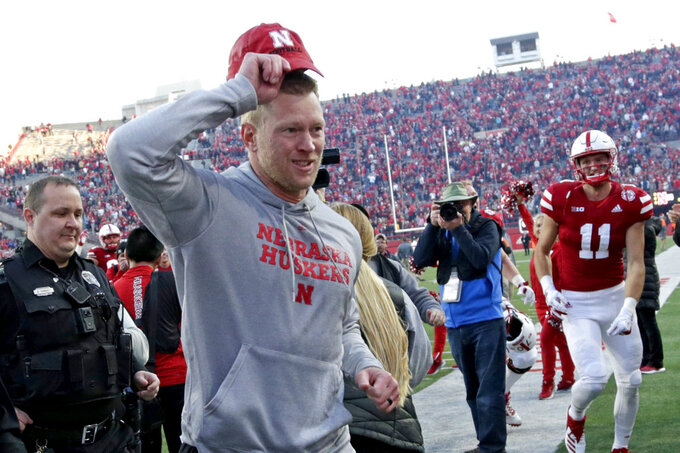 Nebraska head coach Scott Frost tips his cap to spectators as he runs off the field following team's first win of the season in an NCAA college football game against Minnesota in Lincoln, Neb., Saturday, Oct. 20, 2018. (AP Photo/Nati Harnik)

LINCOLN, Neb. (AP) — Getting that first taste of winning left Nebraska hungry for more and the Cornhuskers are not complaining about playing again this week instead of having the open date that originally was on the schedule.

Coach Scott Frost did give players Monday off for the first time this season with the caveat they will make up for the lost time by working hard the rest of the week in advance of Saturday's game against Bethune-Cookman.

The Wildcats of the Football Championship Subdivision are the replacement opponent for Akron. The Huskers were supposed to play Akron in the opener, but the game was canceled because of inclement weather.

"Twelve weeks in a row is tough," Frost said. "Not only do our guys need to rest physically, this has been long and a little bit stressful, and a day where they don't have to come into the building is positive. We kind of felt one day off would benefit us more than getting them right back out there."

Nebraska (1-6) is coming off a 53-28 win over Minnesota that ended the program-record 10-game losing streak. Players said they don't want to stop any momentum they created against the Gophers.

"This is a nonconference game, but that doesn't change anything about wanting to win," offensive lineman Jerald Foster said. "They'll be a good football team, and I know we're all excited to be able to get in the game we didn't have at the start of the year."

Bethune-Cookman (4-4) lost 49-28 to Florida Atlantic in its other game against a Bowl Subdivision opponent this season. The Wildcats are 2-9 all-time against the FBS. This will be only the second time the Daytona Beach, Florida, school has played an FBS team outside the Sunshine State. The Wildcats visited North Texas in 2016.

Bethune-Cookman also is giving up its open date to play the game. Other than earning an $800,000 guarantee, the Wildcats took the game on short notice because of their coaching staff's friendly relationship with Nebraska's. The chief liaison between the staffs is Nebraska tight ends coach Sean Beckton, who spent the first 22 years of his coaching career in Florida before coming with Frost to Lincoln from Central Florida.

"We needed a game. I wanted our guys to be able to play 12 games," Frost said. "We want to go out and play as hard as we can and try to get a win. I know they want to do the same thing. I think both staffs understand we have good men on each staff, Sean Beckton being that guy. They trusted our intentions were right with regard to this game. I'm glad to host them. We have a lot of respect for their coaches and players and look forward to a good game."

If the game against the lower-division opponent unfolds the way it should and Nebraska gets a safe lead, Frost would be able to give significant playing time to reserves including quarterback Noah Vedral, a transfer from UCF who recently was ruled eligible this season.

"The first priority is to be ready to play and try to win the game," Frost said. "This is a team that's 4-4. That's a better record than we have."

Asked if he would rather rest up for next week's trip to Ohio State than play the Wildcats, offensive lineman Matt Farniok didn't hesitate.

"We've got a game instead of a bye week," he said. "Who doesn't want to play football?"