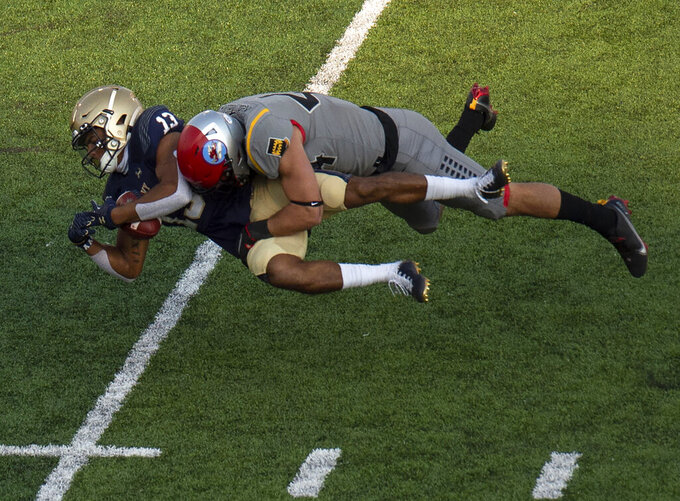 Sophomore QB Haaziq Daniels rushed for a score in his first career start as the Falcons (1-0) took a big first step toward capturing the coveted Commander-in-Chief’s Trophy between the service academies.

Schuettpelz-Rohl connected from 48, 35, 32 and 40 yards in front of a crowd that consisted only of Air Force cadets given the COVID-19 restrictions. It's the 11th time a Falcons kicker has made that many in a game.

There was no telling what the Falcons would resemble on the field with quite a few players taking military turnbacks (an option a cadet has to leave the academy for up to two semesters). A big portion of the missing personnel was on defense, but the Falcons didn’t miss a beat in shutting down Navy (1-2). They held the Midshipmen to 90 yards rushing. The last time Navy was held under 100 yards rushing was at Air Force in 2016 when the team had 57, according to Navy's game notes.

The Falcons improved to 14-0 in season openers under coach Troy Calhoun. It's the latest Air Force has kicked off a season -- and the first time opening with rival Navy.

Daniels earned the starting quarterback spot in an extended fall camp. The team is missing QB Donald Hammond III, who remains a cadet not in good standing, meaning he can practice but can’t represent the school.

Before the game, Navy announced starting quarterback Dalen Morris was out for health reasons not related to COVID-19. Tyger Goslin stepped in and had a 73-yard TD toss to Myles Fells in the second quarter. But Navy never found its groove on offense.

The win puts Air Force in prime position during the annual round-robin Commander-in-Chief’s Trophy competition between the academies. Should the Falcons win at Army on Nov. 7, they would steal the title from Navy and earn a visit to the White House to receive the trophy.

The pregame skydivers socially distanced by landing in the field adjacent to Falcon Stadium. ... Falcons CB Davide Eure was ejected on the second play of the game for targeting. ... FB Timothy Jackson rushed for 118 yards. Brad Roberts had 103. ... Navy safety Kevin Brennan was disqualified for targeting early in the third quarter.

Air Force unveiled uniforms to honor the Tuskegee Airmen, a group of African-American pilots and ground crew from the U.S. Army Air Forces that fought in World War II. The jerseys were gray with black lettering and a yellow strip on each shoulder. A custom nameplate on the jerseys read Red Tails.