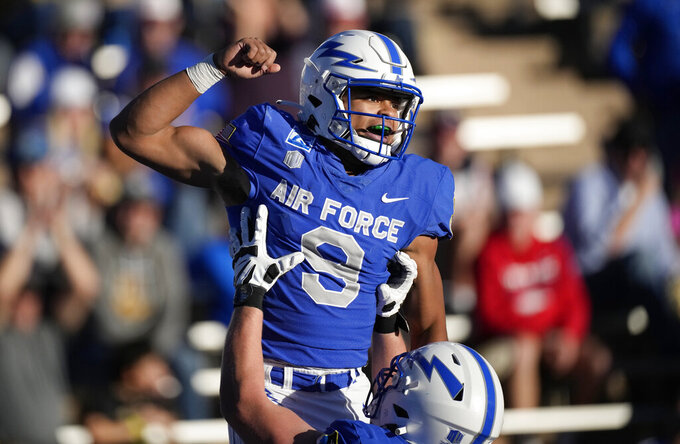 Air Force quarterback Zachary Larrier is hoisted in the air after rushing for a touchdown against UNLV in the second half of an NCAA college football game Friday, Nov. 26, 2021, at Air Force Academy, Colo. Air Force won 48-14. (AP Photo/David Zalubowski)

AIR FORCE ACADEMY, Colo. (AP) — Brad Roberts rushed for two touchdowns, Emmanuel Michel ran for 123 yards and a score as Air Force rolled up 511 yards on the ground to defeat UNLV 48-14 in a season-ender on Friday.

Michel carried 12 times and scored from the 2-yard line in the third quarter as 14 players ran the ball for the Falcons (9-3, 6-2 Mountain West Conference). Air Force attempted no passes but had 69 running plays and more than a 20-minute advantage in time of possession.

Roberts scored both his touchdowns in the first quarter, scoring on runs of 1 and 3 yards.

Brandon Lewis scored in the second quarter as Air Force gained 181 yards on the ground in the first half, leading 24-0. Lewis took a pitch right and flashed through a hole in the line, accelerating down the far sideline for a 41-yard touchdown run.

The Falcons had rolled up 413 yards rushing after three quarters, carrying a 41-7 lead into the fourth. Air Force finished tied atop the conference's Mountain Division standings with Utah State but lost to the Aggies by four points in September.