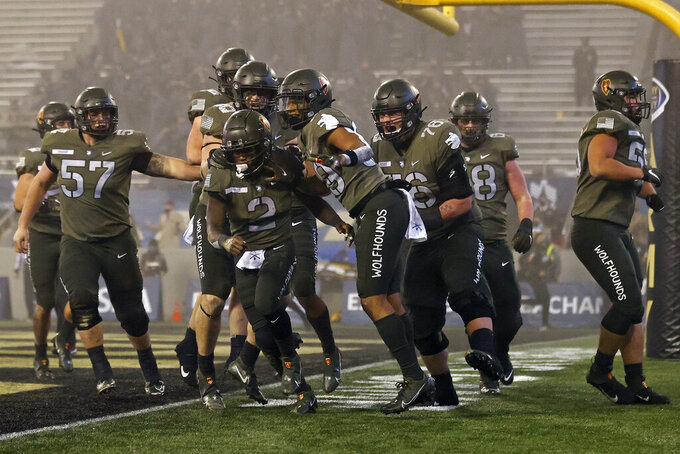 The coronavirus pandemic has led to an unprecedented two-week stretch of football at West Point.

A week after hosting service-academy rival Navy, Army is welcoming Air Force to Michie Stadium. The Black Knights are taking it in stride as they try for a sweep after shutting out the Midshipmen.

“Winning that game just makes this one that much bigger," Army defensive back Cedric Cunningham said.

The Falcons (3-2) visit Saturday and whoever wins gets the big prize — the Commander-in-Chief’s Trophy, the symbol of supremacy among the three academies.

“It’s a source of pride for everybody that plays for it. I’m certain of that,” Army coach Jeff Monken said. “All three schools covet that trophy. It’s the most important goal that we have as a program, and I’m sure that is shared by our counterparts.”

For the first time since 1943, Army (8-2) hosted archrival Navy last Saturday and came away with a 15-0 victory that wasn't really decided until the fourth quarter on a foggy night. Sophomore quarterback Tyhier Tyler scored the game's only touchdown on a 4-yard run up the middle of the Navy defense in the tense fourth quarter of a defensive struggle.

“It wasn’t too hard to put the Navy game behind just considering what’s at stake this weekend,” Army senior linebacker Jon Rhattigan said. “Our goal is to win the CIC. As happy as we were that day this past weekend, it’s on to the next one.”

The Falcons (3-2) routed Navy 40-7 to open their season in October and are chasing a record 21st CIC in a game that was pushed back from its customary date on the first Saturday in November because of COVID-19 issues in and around the Air Force Academy in Colorado Springs, Colorado.

“We’re super excited. It’s at an all-time high, especially now with school over," Air Force junior defensive back Corvan Taylor said. “We get to focus on getting better and focus on beating Army. We’re really excited to play.”

For Air Force senior offensive lineman Nicholas Noyen, a win would be a cherished memory since his class hasn’t been part of a Commander-in-Chief’s Trophy victory. Navy won it last season, breaking Army’s two-year hold on the coveted hardware. Air Force hasn’t won it since 2016.

“We definitely would like to get that back and say that as a class and as a team that we won it and brought it back to Colorado Springs,” Noyen said.

Air Force's triple option ranks second nationally in rushing, averaging 336 yards, and the Black Knights are fourth at 280.4 despite being shut down by Navy (134 yards on 53 carries). The Falcons outgained Navy 369-90 on the ground, scoring 37 straight points. Army has 32 rushing TDs, double Air Force's total, and features seven players with over 230 yards rushing, led by Tyler (440). Air Force has eight players with over 100 yards rushing, led by sophomore Brad Roberts (378).

“It’s always won in the trenches,” Army senior offensive lineman JB Hunter said. “If you control the line of scrimmage, it’s pretty much who wins the game.”

Air Force leads the series with Army 37-16-1 dating to 1972, including 14-11 at Michie Stadium, where the Black Knights are unbeaten in nine games dating to last season.

The Falcons belong to the Mountain West Conference and have played only twice since Halloween because of COVID-19, with a pair of cancellations. They won both games — 28-0 at home against New Mexico and 35-7 at Utah State — against teams that have combined to win just three of 14 games. Air Force’s two losses have come against the top two teams in the league, Boise State (49-30) and San Jose State (17-6) on consecutive weeks in late October.

“It’s not done yet," Air Force coach Troy Calhoun said. “We aren’t taking anything for granted. Just any amount of football we were able to squeeze in during these months was really, really good.”

The Falcons have been the third wheel in the round-robin series with their service-academy rivals, taking a back seat to Army-Navy, which began in 1890, and rarely playing either foe at a neutral site. That's changing. This will be Air Force's last visit to Michie Stadium for a while. The schools announced Thursday that they had agreed to meet the next two seasons at Globe Life Field in Arlington, Texas, home of MLB's Rangers, and that arrangement could be extended. Army and Air Force haven't played at a neutral site since 1965 at Chicago’s Solider Field.