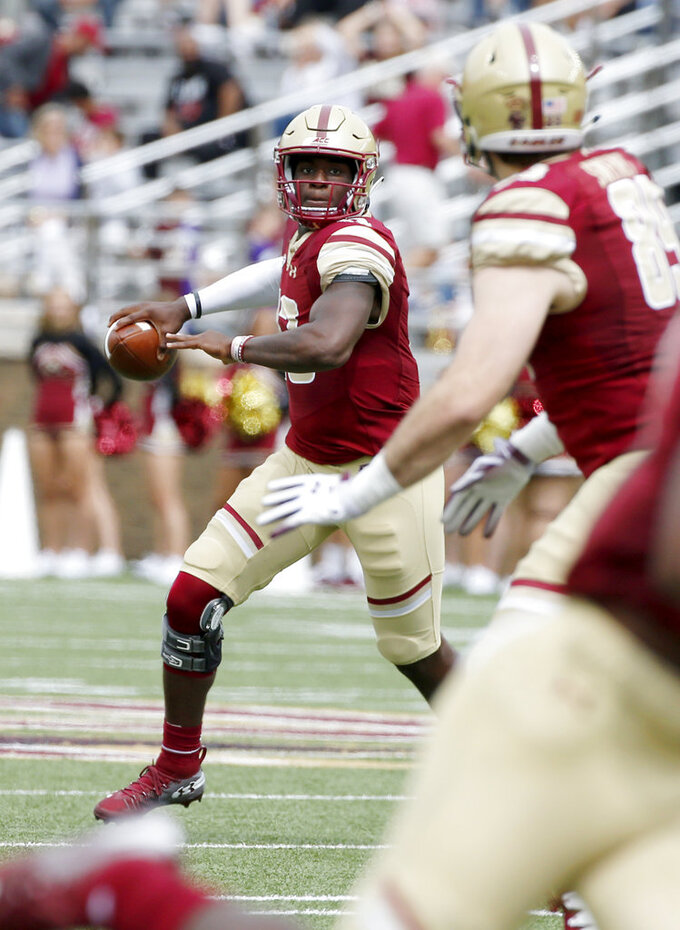 Boston College quarterback Anthony Brown (13) scrambles as he looks to pass during the first half of an NCAA college football game against Holy Cross, Saturday, Sept. 8, 2018, in Boston. (AP Photo/Mary Schwalm) 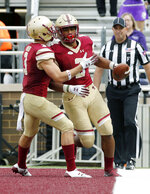 Dillon, the Atlantic Coast Conference's preseason player of the year, carried just six times before BC (2-0) went to its reserves late in the first quarter. Quarterback Anthony Brown completed his only two passes for 53 yards.

"The tone was set from the first drive," BC coach Steve Addazio said. "AJ was running at will and I thought both sides of the ball played extremely well."

"A very good football team; one that we don't necessarily see the likes of," Holy Cross first-year coach Bob Chesney said. "They did a great job. That running back is something special."

It was the 83rd game between the Jesuit schools that once made up New England's biggest football rivalry.

The series ended when Holy Cross joined the Patriot League and cut its athletic scholarships after BC's victory in 1986. The loss of scholarships also prevented BC - then a 1-A program (now FBS) - from playing a then-1-A (now FCS) school in games that would count toward bowl eligibility.

But in 2013 the Patriot League returned athletic scholarships and the schools agreed to resume the series. They are slated to meet on BC's campus in 2020.

Dillon went 54 yards on BC's first play from scrimmage and scored three plays later, running in untouched from 7 yards out.

On the first play of the Eagles' second possession, Dillon went around the right end, broke two tackles, and jumped over a diving defender near the 10-yard line before completing his 74-yard score. His third was a 7-yarder, making it 21-0 midway into the opening quarter.

On the opening kickoff, Holy Cross' linebacker Jack Haddon was hit hard on coverage and was face-first on the turf for a while. The crushing hit on him brought 'Oohs' from some fans in the stands, expecting to see an early blowout, but also appearing concerned about the teams' size difference. Addazio checked on Haddon, who walked off slowly.

Holy Cross: The experience may have helped. . There was a large contingent of fans dressed in purple and white - Holy Cross' colors - around pregame and in the stands.

Boston College: The Eagles, expected to be improved in conference play, get their first test at Wake Forest Thursday.