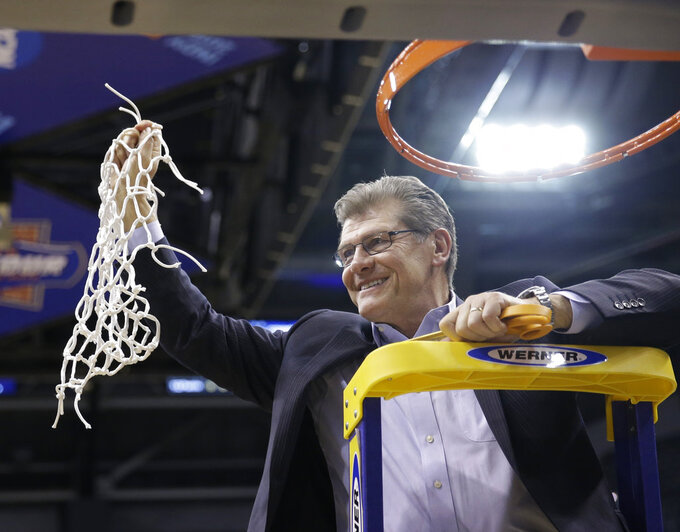 FILE - In this Tuesday, April 5, 2016, file photo, Connecticut head coach Geno Auriemmac celebrates by cutting down the net following Connecticut's 82-51 championship victory over Syracuse at the women's Final Four in the NCAA college basketball tournament in Indianapolis. Auriemma's 11 titles are one more than UCLA's John Wooden for the most ever in Division I basketball. (AP Photo/AJ Mast, File)

SANTA CLARA, Calif. (AP) — With five national championships in the past nine seasons, Alabama already has accomplished something never done before in the AP poll era that began in 1936.

Winning another crown Monday night against Clemson would lift the Crimson Tide even further above other college football dynasties and into the conversation about the best runs in all of college sports.

Not that coach Nick Saban is worried about any of that.

"I'm always looking ahead. I think I'm always sort of focused on the next challenge," he said this week. "It's a lot like climbing a mountain; you push a rock up a mountain, but when next year starts, it's a new mountain, and you'd better be focused on that, and that's the way we try to approach it with the individuals in our organization as well as our players."

Before Alabama began this run by winning its first title under Saban in 2009, there were several other schools that could stake a claim to greatest college football dynasty in the poll era.

Coach Frank Leahy led Notre Dame to four No. 1 rankings during a seven-year span in the 1940s, missing out only during the two years he served in World War II and in 1948 when the Irish finished No. 2 to Michigan thanks to a tie against Southern California.

Miami went on a memorable run starting with the 1983 championship under coach Howard Schnellenberger. The Hurricanes added another title under Jimmy Johnson in 1987 and two more under Dennis Erickson in 1989 and '91. But a loss in the Sugar Bowl the following year to Alabama denied Miami a fifth title in that run.

Nebraska and USC had shorter stretches of dominance, with the Cornhuskers winning consecutive titles in 1994-95 and then sharing the championship with Michigan in 1997.

The Trojans shared a title in 2003 with LSU before repeating as solo champion the next season. USC took a 34-game winning streak into the BCS title game at the Rose Bowl the following year before losing to Texas.

Here are a look at some of the greatest dynasties in other college sports:

UCLA BASKETBALL: John Wooden's Bruins are the standard when it comes to college sports dynasties. UCLA won 10 titles in 12 seasons, including a staggering seven in a row from 1967-73. UCLA finished undefeated in four of those seasons, won a record 88 straight games from 1971-74 and made the Final Four 10 straight years. The run featured some of the game's greatest players from the first title team in 1964 led by Walt Hazzard and Gail Goodrich, to Lew Alcindor's three straight championships from 1967-69 to Bill Walton's run in the early 1970s.

UCONN WOMEN'S HOOPS: Geno Auriemma's Huskies have put together a run to rival the one engineered by Wooden. Auriemma took over a program that had only one winning season before he arrived in 1985 and built an undefeated champion a decade later. But the real run of dominance started at the turn of the century with the school's second championship in 2000. Things really took off with three straight titles led by Diana Taurasi from 2002-04 before a brief slide that ended with Maya Moore's arrival. UConn won back-to-back titles in 2008-09 led by Moore and then four in a row with Breanna Stewart from 2012-16. Auriemma's 11 titles are one more than Wooden for the most in Division I basketball, and the UConn coach had a record 111-game winning streak that finally ended in the 2017 Final Four against Mississippi State.

NORTH CAROLINA WOMEN'S SOCCER: Anson Dorrance led the Tar Heels to their first three NCAA titles starting in 1982 and then a run of nine in a row from 1986-94 behind some of the greatest players in the sport such as Mia Hamm and Kristine Lilly. He had a 103-game unbeaten streak, won 21 NCAA titles and had 13 players combine to win 20 Player of the Year awards. Dorrance was the first coach to win 20 NCAA titles and has won more than 90 percent of the games in his career.

USC BASEBALL: Coach Rod Dedeaux put together the best run in college baseball history, winning five straight College World Series titles from 1970-74 with rosters full of players who went on to be big-name stars in the majors. Among the players on those teams to become big league All-Stars were Dave Kingman, Fred Lynn, Roy Smalley, Steve Kemp and Steve Busby. The Trojans went 256-71-2 during that span.

IOWA WRESTLING: Dan Gable followed up a brilliant wrestling career that featured a 117-1 record in college at Iowa State and a 1972 Olympic gold medal by building the biggest dynasty in the sport. Gable's teams at Iowa had a 355-21-5 record in dual meets during his career from 1976-97. He won 17 NCAA titles, including a record nine straight from 1978-86 before being denied by Iowa State. The Hawkeyes won 17 NCAA championships and 21 Big Ten titles in his 22 seasons as coach.