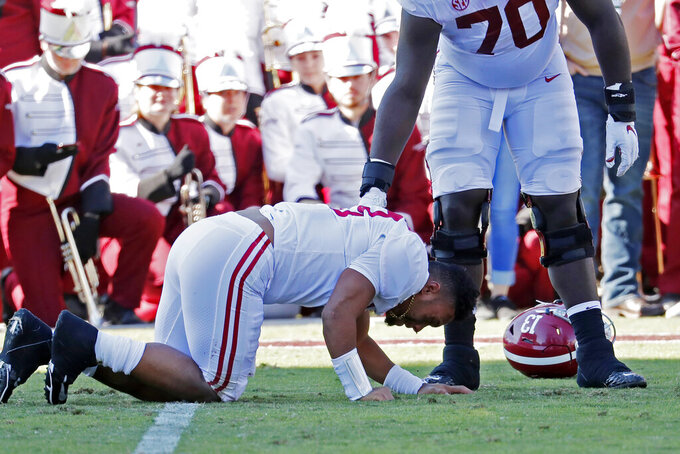 TUSCALOOSA, Ala. (AP) — Alabama quarterback Tua Tagovailoa is scheduled to have hip surgery in Houston.

Team surgeon Dr. Lyle Cain said in a statement Sunday that Tagovailoa will have surgery on his dislocated right hip Monday. An Alabama spokesman declined to disclose where he was having the surgery citing privacy reasons.

Cain says the medical team “consulted with multiple orthopedic experts across the country, who specialize in hip injuries and surgeries.” He reiterated that they expect Tagovailoa to make a full recovery.

The fifth-ranked Crimson Tide’s star, a potential top pick in April’s NFL draft, was injured while being dragged down by two defenders late in the first half of Saturday’s 38-7 win over Mississippi State.

Tagovailoa had been nursing an ankle injury and Alabama was considering holding him out of this game. Defensive linemen Phidarian Mathis and Raekwon Davis posted a picture with a smiling Tagovailoa in his hospital bed Sunday.

He passed for 418 yards and four touchdowns in a loss to No. 1 LSU less than three weeks after right ankle surgery.