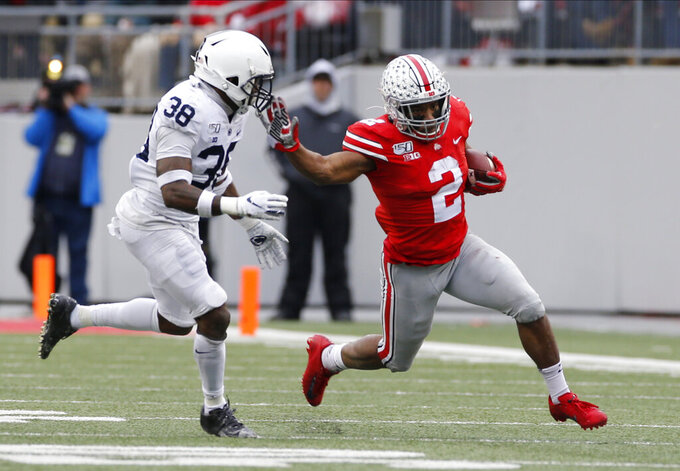 FILE - In this Nov. 23, 2019, file photo, Ohio State running back J.K. Dobbins, right, cuts up field against Penn State defensive back Lamont Wade during the first half of an NCAA college football game, in Columbus, Ohio. Championship weekend crowns the winner of 10 FBS conferences and matches up some big-time players. Wisconin and Ohio State will meet for the Big Ten Championship. (AP Photo/Jay LaPrete, File)

Only the best of the best get to play this weekend in college football. Championship weekend crowns the winner of 10 Bowl Subdivision conferences and matches up some big-time players. A look at some of the potential All-Americans who will be matching up in major college football’s biggest trophy games. The AP All-America team presented by Regions Bank will be announced Dec. 16.

Ahmad Gardner, CB, Cincinnati vs. Antonio Gibson, WR, Memphis. Gardner is a freshman who has quickly developed into a lock-down corner. He has returned two of his three interceptions for touchdowns. Gibson is a versatile playmaker. The senior is the Tigers’ second-leading receiver, averaging 20.8 yards per catch with seven touchdowns and has also run for 233 yards and three scores on 20 carries.

The 333-pound Roy clogs the middle for the Big 12’s top defense (4.77 yard per play) and has 10½ tackles for loss. Humphrey might be the best center in the country, helping pave the way for the Sooners’ running game, which is No. 1 in the Big 12 at 260 yards per game.

Orr is an active linebacker with 13.5 tackles for loss and two fumbles forced. The Badgers stingy defense has allowed just seven rushing touchdowns. Dobbins is on tear lately, with 368 yards rushing in the last two games against Penn State and Michigan. He also had 163 on 20 carries in the first meeting against Wisconsin.

Ok, ok. It’s not likely a 290-pound interior defensive lineman and 240-pound pass catching tight end will be bumping into each other much Saturday. But these are the best players on each team. Bryant is a legit All-America candidate with 61 catches for 965 yards and six scores, Marino has 12.5 tackles for loss for what has been far and away C-USA’s best defense.

Banks has been one of the best defensive players in the MAC, with four interceptions and five other passes broken up. Sullivan is Central Michigan’s big-play receiver, averaging 15.5 yard per catch. Banks could also see a lot of Kalil Pimpleton, who leads the MAC in catches with 73.

Another one where the two won’t go head-to-head, but if you’re looking for All-America contenders, these are the guys. Byrd is first in the Mountain West in catches with 91 and third in receiving yards with 1,049 and 10 touchdowns. Weaver leads the conference in sacks with 13.5 and is a leading contender for Mountain West defensive player of the year.

Big-time matchup. Sewell is on the short list of best offensive lineman in the country. The sophomore has the size and athleticism of a future top NFL draft pick. Anae is the best pass rusher (12.5 sacks) on the Pac-12’s best defense. Across the line, the matchup of Oregon’s offense and Utah’s defense should be nasty fight between a bunch of a big, talented players.

The whole Georgia defense vs. LSU offense should be terrific. The Bulldogs are near the top in most defensive categories and the Tigers are lighting up scoreboards with Heisman Trophy front-runner Joe Burrow at quarterback. Stokes is Georgia’s top corner. Chase is the nation’s leading receiver, averaging 132.5 yards per game and 20.8 per catch, with 17 touchdowns.

Dotson is a powerful run blocker, leading the way for a run-heavy offense that averages 274.2 yards per game. Other Appalachian State players get more stats, but the 275-pound Scott is an undersized disruptor in the middle who frees up his teammates.