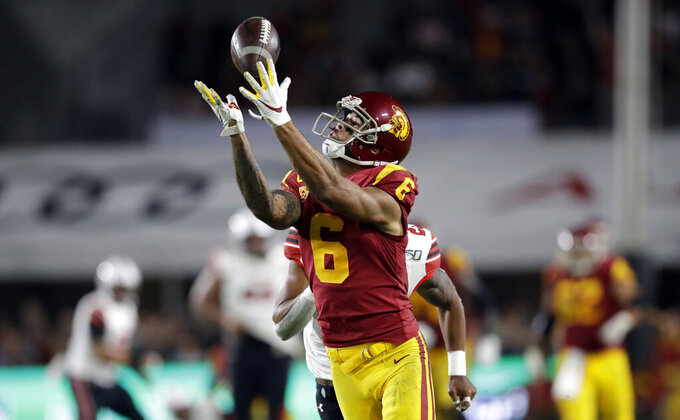 The Associated Press has been honoring college football's best with an All-America team since 1925. The midseason All-Americans will be released Oct. 15. The full three-team AP All-America team presented by Regions Bank will be unveiled in December. The weekly All-America watch features a Florida State running back rebounding from a sophomore slump, Southern California's top target and a big-time matchup of big men in the SEC.

Akers is flashing his freshman form again as a junior. Last year, running behind one of the worst offensive lines in the Power Five, Akers rarely was able to get free. Getting a little more help this year, Akers is again a weapon for the Seminoles. He has 17 runs of at least 10 yards through four games compared to 16 all last season. He's coming off a grinding 112 yards and three touchdowns in a victory against Louisville. Florida State will need another big day from Akers to make it two straight victories. North Carolina State visits Saturday with one of the best run defenses in the ACC.

The senior went off against Utah, with one of the best individual receiving games in USC history pushing him to 11th in the country in yards receiving per game at 109.3. At 6-foot-4 and 220 pounds, Pittman is a security blanket for whoever is playing quarterback for the Trojans. USC is already on its third after injuries to J.T Daniels (knee) and Kedon Slovis, who was knocked out of the Utah game early. No word on whether Matt Fink will have to start this week at No. 17 Washington, but his former roommate, Pittman, is here to help pull him through.

The Wolverines' malfunctioning offense has gotten a bunch of attention, but the defense hasn't been great either and it was pretty much run over by Wisconsin. Michigan is replacing stars Devin Bush, Rashan Gary and Chase Winovich, but expectations were still plenty high for CB Lavert Hill, LB Khaleke Hudson, S Josh Metellus and DE Kwity Paye. Hudson is the only one playing at a high level, but when the team struggles the chances for individual recognition go way down. Michigan has only the nation's No. 47 overall defense and, after last week, is just 68th in scoring defense, allowing 25.7 points per game.

Highsmith is following up a breakout 2017 when he had 17.5 tackles for loss with an even better senior season. The former walk-on has five sacks among his 6 ½ tackles for loss in four games for the 49ers.

(ESPN and SEC Network analyst Cole Cubelic, who played guard at Auburn, breaks down an offensive lineman playing at an All-America level).

The junior and preseason All-American helped paved the way for 359 yards rushing against Michigan on Saturday.

"He put on a clinic," Cubelic said. "Played through the whistle, finishing his blocks. Not only does he direct traffic at the line of scrimmage, but he is one of the more physical players on that team. He went a long way toward proving he is the best center in college football."

Gamecocks-Wildcats does not qualify as a marquee matchup, but it features two of the best interior lineman in the country. Hopefully, the two seniors, each 300 pounds plus, will get some one-on-one opportunities against each other. Kinlaw has four sacks. Stenberg has been as steady as any offensive lineman in the country. According to Pro Football Focus College, no guard in FBS has had more pass blocking opportunities (138) without allowing a quarterback pressure.