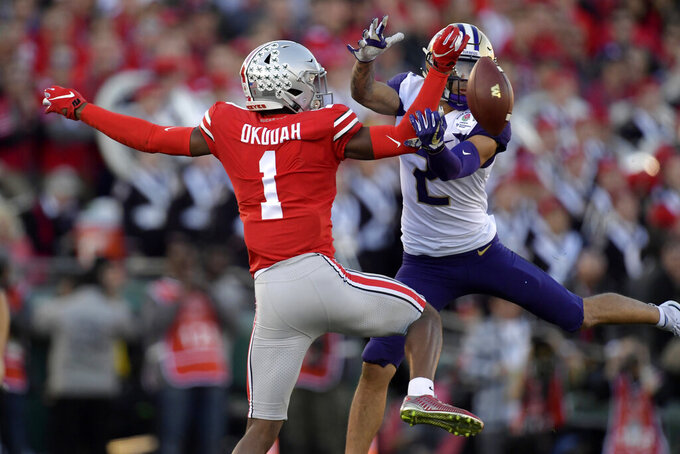 FILE - In this Jan. 1, 2019, file photo, Ohio State cornerback Jeffrey Okudah breaks up a pass intended for Washington wide receiver Aaron Fuller during the first half of the Rose Bowl NCAA college football game in Pasadena, Calif. NFL scouts already had taken notice of Ohio State cornerback Jeffrey Okudah, even though the junior had yet to record an interception in his first two years. Now Okudah has three picks in the past two weeks and his NFL stock is rising. (AP Photo/Mark J. Terrill, File)

COLUMBUS, Ohio (AP) — Jeffrey Okudah already was on the radar of NFL scouts as he began his second season as a starting cornerback for Ohio State. Most observers agreed he was a good-sized, tough, fast pass defender — even with a big fat zero on his career stat line for interceptions.

Suddenly, he has three picks in the last two weeks — two in a prime-time Saturday night win over Nebraska — and his profile and NFL stock are rising.

The junior from Texas acknowledged that the first interception — which came in his 31st game and was overshadowed by the Buckeyes' offensive onslaught in a 76-5 rout of Miami (Ohio) — helped to "kind of get a monkey off my back."

"I think it did give me some confidence to show myself I could do it," he said. "Then coming out and following up with a pretty good performance, I think that speaks to the confidence I came into the game with."

Last Saturday, he broke in front of Wan'Dale Robinson on Nebraska's first possession for his first pick. Two Husker possessions later, Okudah grabbed a tipped ball out of the air while lying flat on his back.

"Sometimes you've got to thank the football gods," he said.

Coach Ryan Day said Okudah has thrived in the new defensive scheme installed by co-coordinators Greg Mattison and Jeff Hafley. The latter also is the defensive backs coach Okudah credits with making him a much better player this season and he could end up in the mix for awards or honors like the Associated Press All-America team presented by Regions Bank. The scheme is a mix of zone and man-to-man coverage with more flexibility than the strict man-coverage alignments the past few seasons.

"He's gotten with Jeff Hafley and our defensive scheme, and it seems to be a good fit right now," Day said Tuesday. "They're off to a great start. Any time you come in with another year experience, another year in the program, I think that really matters. I think it's a combination — he's a year older and he's really embraced the style of defense."

Hafley believes Okudah, a former five-star recruit, has improved with experience and has learned to practice harder and prepare better for the No. 4 Buckeyes.

"He's spending a lot of time listening to the 'why,'" Hafley said. "Like he's starting to understand why certain (pass) routes are coming. So I think he's seeing the game a little bit different, and that slows it down for him. Mentally, I think he's becoming a better football player."

Okudah gives due credit to Hafley, who came to work for Day after the two coached together on the staff of the San Francisco 49ers.

"He's someone who changed my whole career," Okudah said.

(SEC Network analyst Cole Cubelic, a former guard at Auburn, breaks down an offensive lineman playing at an All-America level)

The 313-pound sophomore moved into the starting lineup late last season due to injuries and has become an anchor on the Buckeyes' line this season.

"Davis was a machine versus Nebraska, using great pad level to get movement at the point of attack," Cubelic said. "Helped in combo blocks to the second level. Plays with great technique and effort."

Greenard, a transfer from Louisville, has been one of the best pass rushers in the SEC, with four sacks. Wanogho has developed into one of the best tackles in the country and protects freshman QB Bo Nix's blindside. The Gators are also expected to have their other top defensive end, Jabari Zuniga healthy and ready to go for a top-10 matchup at the Swamp on Saturday.