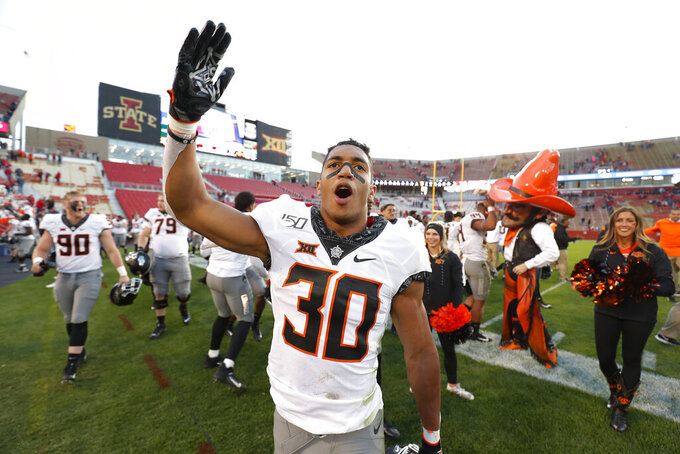 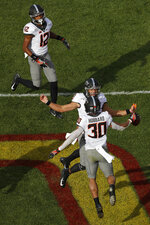 For as far back as Hubbard can remember, folks have struggled to pronounce his first name. Most say CHUB-uh. He even heard someone throw his first and last name together and come up with Choohubbard.

For the record, it's pronounced CHOO-buh. And since he leads the nation in rushing and all-purpose yards, people are finally starting to get it right.

He is giving people plenty of reasons to practice. He has rushed for 1,381 yards this season in eight games, an average of 172.6 yards per contest, and ranks second nationally with 16 rushing touchdowns heading into Saturday's home game against TCU. It's been enough to draw attention from former Oklahoma State and NFL star running back Barry Sanders, a Heisman Trophy winner.

"He congratulated me on how the season's going," Hubbard said. "I would have never thought in a million years that Barry Sanders would be congratulating me. It's cool."

Hubbard has approached some of Sanders' numbers. He rushed for a career-high 296 yards in a win over Kansas State, one of three games this season in which he has rushed for at least 200 yards.

"He is a great football player," Kansas State coach Chris Klieman said. "He can run through arm tackles, he gets his shoulders squared and then he'll outrun you. He is a dynamite player."

Against Tulsa, Hubbard broke loose for a 75-yard touchdown run on the first play from scrimmage. He blew past defenders who appeared to have an angle on him and crossed the goal line 10 seconds into the game. He finished the day with 256 yards and three touchdowns. He pounded out 171 yards on 32 carries against undefeated Baylor.

"Hubbard is amazing," Baylor coach Matt Rhule said. "You never know how good someone is until you play them. He was hard to tackle."

It's quite a jump for a young man who grew up playing Canadian football. Hubbard hails from Sherwood Park, near Edmonton, Alberta. While many of his friends played hockey, he drifted toward track and football and competes in both at Oklahoma State. The benefits of track were also touted by Wisconsin star running back Jonathan Taylor , a member of the AP preseason All-America team presented by Regions Bank.

Hubbard never saw being from Canada, or anything else, as a limitation.

"For me, there's a lot of talented Canadian football players out there," he said. "I think that's often overlooked and that's one of the big reasons I'm proud that I came here, and proud that I'm showing Canadians can ball. It's different football, but at the end of the day, it's still football."

Though he watched the Canadian Football League's Edmonton Eskimos as a kid, he also grew up admiring NFL running back Adrian Peterson because of his durability and explosiveness.

He is like Peterson in some ways. He has breakaway speed, which has allowed him to average 6.4 yards per carry. As for durability, he averages 27 carries per game. His powerful 6-foot-1, 207-pound frame handles punishment well— and he dishes it out, too.

"A lot of people when they first saw me here — really my whole life playing football — they just see me as that fast guy," he said. "I got involved with football because of the contact. I could have just stayed with track and ran but I like hitting and I like running through people. That's just stuff I love."

Winfield missed most of the last two seasons due to serious injuries and was granted a sixth year of eligibility by the NCAA. He has been one of the leaders of the 13th-ranked and unbeaten Gophers all season and is coming off two of his better games. Winfield has three interceptions, including one returned for a touchdown, in the last two games.

The Tigers have lost two straight and their running game disappearing has been a big part of the problem. Rountree, who had three 100-yard games in his first six, has 87 yards on 27 carries in losses to Vanderbilt and Kentucky.

Anae leads the Pac-12 in sacks with seven and is one of the top edge rushers in the country. Fotu is a 335-pound disruptor in the middle of the Utes' defense who has seven tackles for loss. The senior was the conference defensive lineman of the week last week. Anae earned the honors the week before.

Adams is one of the top tackles in the country and Harris was a second-team preseason All-American at center. To beat the Utes, Adams and Harris need big games controlling Anae and Fotu.