All is Wells for Texas Tech, familiar offense to go with D 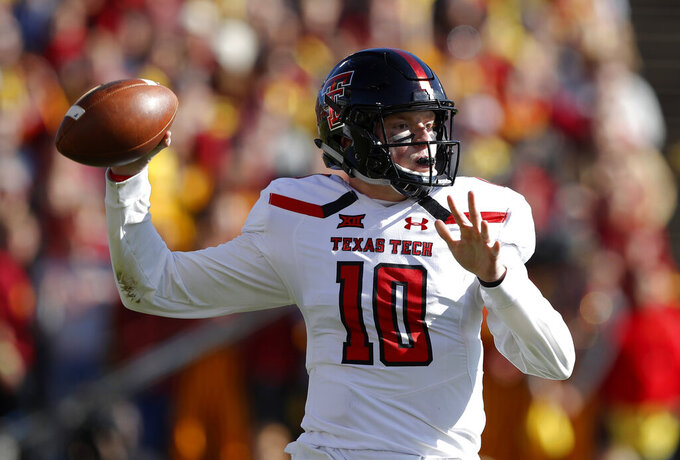 FILE - In this Oct. 27, 2018, file photo, Texas Tech quarterback Alan Bowman throws a pass during the first half of an NCAA college football game against Iowa State in Ames, Iowa. The Red Raiders have a new coach in Matt Wells, and a healthy sophomore quarterback in Bowman after he showed off his exceptional ability in between dealing with a deflated lung. (AP Photo/Charlie Neibergall, File)

For all the changes that have been made on and off the field at Texas Tech since Matt Wells took over as head coach, what will look the most familiar to everyone is the offense.

"There's some philosophies and there's some schemes that are absolutely carry-over from the previous staff, from Kliff (Kingsbury), and even going back to coach (Mike) Leach," said Wells, who had his own high-scoring offenses at Utah State.

Wells will also put plenty of emphasis on defense, an area where the Red Raiders have long struggled.

"You've got to feel good about that," senior defensive lineman Broderick Washington said. "Having coach Wells come in and defense automatically already seems important to him, it's a confidence booster. It makes you want to be great for him."

"The biggest thing to consistently winning in the Big 12 for my tenure here at Texas Tech is we have to play championship-caliber defense," Wells said. "There is not a time that is ever more challenging than to play that in the Big 12 than right now."

After six seasons at his alma mater, Wells left for the Big 12 to replace Kingsbury, the record-setting Red Raiders quarterback-turned-coach who was fired by his alma mater after a third consecutive losing season before becoming an NFL head coach.

The Red Raiders will play their first game under Wells at home Aug. 31 against Montana State. Their Big 12 opener is Sept. 28 at Oklahoma, which has won the league title the last four seasons.

Wells described sophomore quarterback Alan Bowman as a football junkie. Bowman was the first player Wells met after touching down in Lubbock, and the quarterback immediately wanted to watch video of Utah State and what the Aggies did on offense. As a true freshman last season, Bowman completed 69% of his passes (227 of 327) for 2,638 yards with 17 touchdowns and seven interceptions, including a 605-yard game with five TDs against Houston. He missed four games because of a collapsed lung.

"Completely cleared, healthy," Wells said. "I respect his grind, he's got a great attitude. ... I think Alan's better days are ahead of him. He's talented."

"My expectations first and foremost from them is that they come in and help solidify our culture," Wells said. "They're all young men that I respect the programs that they came from, and the job that they had done."

Receiver McLane Mannix, a Texas native and transfer from Nevada, obtained an NCAA waiver to play immediately as a junior.

NOT ALWAYS IN TIGHT

While Wells utilizes a tight end on offense, that player won't always line up right next to a tackle.

Four of Texas Tech's six Big 12 losses last seasons were by fewer than 10 points. That included back-to-back home games against Oklahoma and Texas by a combined 12 points.