Allen challenges Indiana to stay focused on taking next step 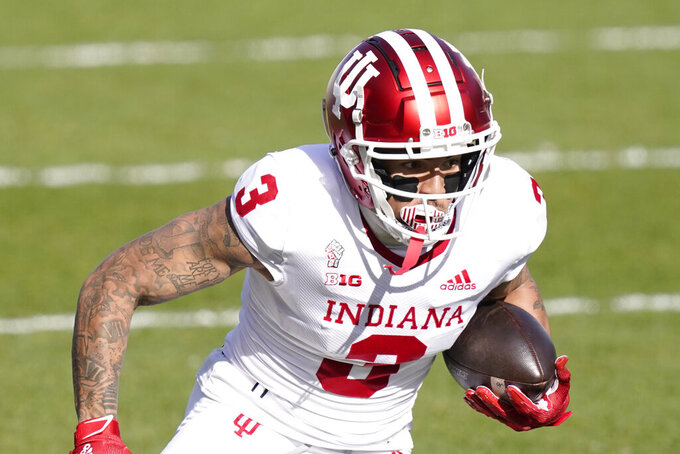 FILE — In this Nov. 14, 2020, file photo, Indiana wide receiver Ty Fryfogle plays during the first half of an NCAA college football game, in East Lansing, Mich. Fryfogle is returning for his fifth season this fall. (AP Photo/Carlos Osorio, File)

So Allen has challenged his team to fulfill its potential and claim the Hoosiers' first Big Ten crown since 1967.

Allen isn't the only one bullish on the Hoosiers prospects this season.

Season ticket sales are up 27% from 2019, the last time Big Ten teams played in front of full stadiums. Media members picked the Hoosiers to finish third in the East Division, behind only Ohio State and Penn State. And instead of tamping down the soaring expectations, players and coaches openly embrace them.

“We always come in with a chip on our shoulder, we always feel like we've got something to prove," Penix said. “Our leaders are being leaders, taking control of the team. We're going to come out with the same energy, the same level of intensity every single day."

The question, of course, is whether Indiana can keep turning heads, winning games and climbing the rankings after their best season in a half century. Allen believes they can and will.

“Yeah, I've got high expectations for this football team. I haven’t shied away from that," he said. “We finished second in the Big Ten East last year. Our goal is to play in the Big Ten championship and win the game."

Last August, Big Ten teams weren't even sure there would be a season Spring practice was canceled after just a few practices, players worked out individually at home most of the spring and summer and as camp opened, Allen wondered if his team would be in football shape. It's a different story this year.

“I really love where our team is at physically," Allen said. “That excites me more than anything, the physical condition of our guys. Just from the speed perspective and lean muscle mass, explosive power, all those things that we really emphasize as a strength program, I would say as a collective group it’s at a very high level."

As offensive coordinator Nick Sheridan begins his second season as the play-caller, Indiana has a new defensive coordinator. Charlton Warren replaces Kane Womack, who took the South Alabama head coaching job in December. Warren worked previously at Air Force, Nebraska, North Carolina, Tennessee, Florida and Georgia. He believes the Hoosiers have some of the same traits he's seen at other stops.

“Ï think the commitment to win, the drive for excellence and the work these kids put in are at the highest level or the same level as the other places I've been," Warren said.

Indiana expects Penix to return for the Sept. 4 opener at Iowa, the first big date on a front-loaded schedule. Another surprisingly strong team from last season, Cincinnati, visits Bloomington on Sept. 18. And if the Hoosiers win Sept. 25 at Penn State, only Michigan State would stand in the way of a showdown with Ohio State on Oct. 23 in Bloomington.