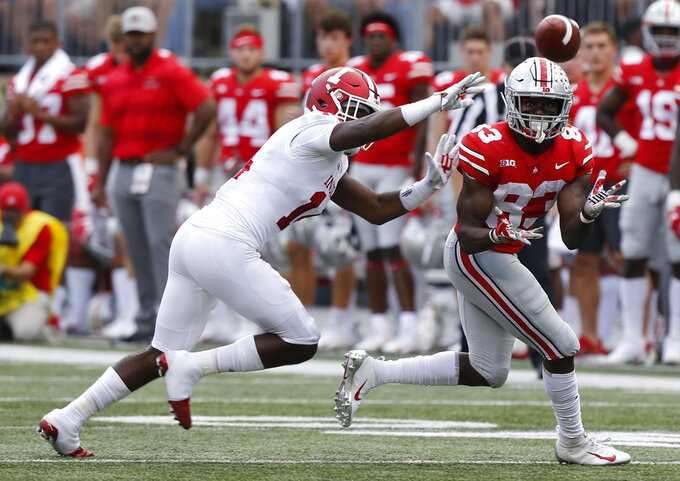 Indiana coach Tom Allen could have been upset after watching his defense allow 49 points last weekend at No. 3 Ohio State.

The Hoosiers forced three turnovers, consistently pressured quarterback Dwayne Haskins Jr. and slowed down the Buckeyes' vaunted ground game — a solid performance from a young, improving group of players who have often been overshadowed by the Hoosiers' usually high-scoring offense in previous seasons.

Make no mistake: Allen's preference would have been to cut that point total at least in half.

But the reality was Indiana (4-2, 1-2 Big Ten) held Ohio State to its season average, kept the Hoosiers within striking distance through three quarters and demonstrated their defense possesses some key cornerstones against one of the nation's top teams.

At the midway point of this season, the Hoosiers have a league-high 13 takeaways — matching their 12-game total from 2017.

Ohio State entered the game averaging 210.4 yards per game and 5.0 yards per carry but was limited to 154 yards in 48 attempts, a 3.2 average. And though the Hoosiers only finished with one sack they harassed Haskins into some errant throws.

Allen believes all of those elements bode well for a potentially brutal second half of the season, which officially begins Saturday when Iowa comes to town.

"I think we have a more athletic defense as a group, and I said that going in," he said. "I think when you have a more athletic group, you create more takeaways. Because No. 1, you get to the ball quicker to force them, and you're around the ball more to recover them. We've got to take advantage of it as a team, and that's what we do as a program."

Indiana needs to create turnovers and do a better job converting into points given what lies ahead.

After facing the Hawkeyes, Indiana hosts No. 8 Penn State before heading to Minnesota on a short week. Following their bye week, the Hoosiers host surprising Maryland and visit No. 12 Michigan before closing out the regular season at home against rival Purdue, which has won two in a row.

While the improving offense remains more than capable of winning shootouts, Allen knows what the Hoosiers need most is balance.

"I was concerned in the beginning about us stopping the run, and that's continued to grow and improve," Allen said. "Holding them to 3.2 yards a carry on 48 attempts is a big step for us."

The Hoosiers aren't just getting better as a unit, either.

Linebackers Reakwon Jones, a redshirt junior, and Cam Jones, a freshman, have combined with fifth-year senior Dameon Willis Jr. to solidify the middle of the defense after losing Tegray Scales and Chris Covington to graduation.

Marcelino Ball and Jonathan Crawford remain big-play threats in the secondary, and if the front four continue to pressure opposing quarterbacks, Allen may finally have a defense that can measure up against the best of the Big Ten.

"I think for me to approximate what I think about defensively, I think, 'Hey, I'm going to score on defense. Get those interceptions and go score. Just create that momentum that that kind of play creates for your team,'" Allen said. "I just think it's a never-ending process of continuing to create pressure, and you get more sacks and more pressures, and that's the objective each and every week."