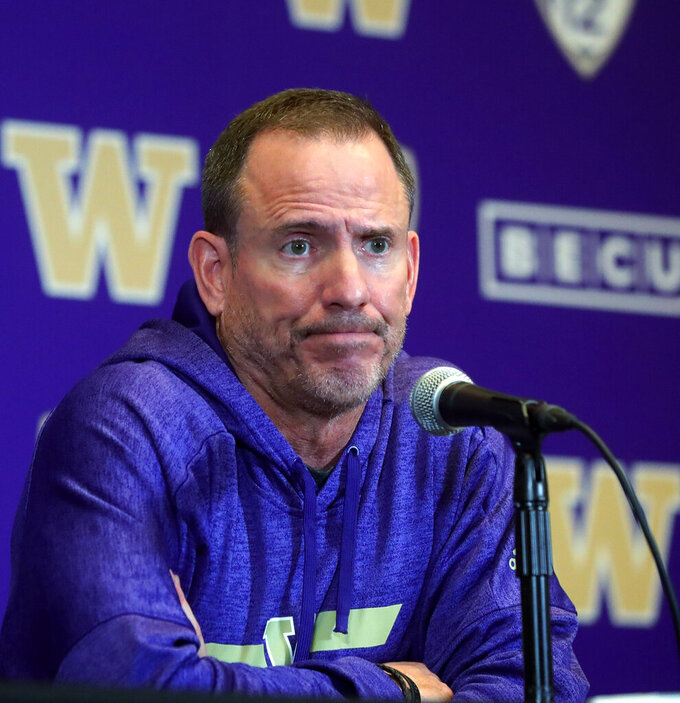 Bob Gregory, interim Washington football coach, meets the media in Seattle on Monday, Nov. 8, 2021, following the announcement of coach Jimmy Lake's one-game suspension. As interim, Gregory will lead Washington when it hosts Arizona State on Saturday. It’s been a tumultuous couple of weeks for the Huskies, who are on the verge of their first losing season since 2009 and need wins in two of the final three games to become bowl eligible. (Greg Gilbert/The Seattle Times via AP)

SEATTLE (AP) — Washington’s Bob Gregory already knew the drill as he stepped into the role of interim head coach for this week.

He did it once before when he was at Boise State, even if the result was a rather forgettable loss.

“Thanks for reminding me of that,” Gregory deadpanned this week. “That was a long time ago. It was a completely different team.”

The defensive coordinator is filling in after coach Jimmy Lake was suspended one game without pay for making physical contact with one of his players on the sideline during last week’s loss to Oregon. As interim, Gregory will lead Washington (4-5, 3-3 Pac-12) when it hosts Arizona State (6-3, 4-2) on Saturday.

It’s been a tumultuous couple of weeks for the Huskies, who are on the verge of their first losing season since 2009 and need wins in two of the final three games to become bowl eligible. It started before the rivalry game when Lake took a shot at Oregon’s academics. It continued with another lackluster offensive performance and Lake’s loss of composure on the sideline.

A day after the loss, Lake fired offensive coordinator John Donovan and replaced him with wide receivers coach Junior Adams for the rest of the season. Lake was suspended a day later.

Gregory believes the Huskies will rally amid the chaos.

“I think our guys are going to be energized and ready to go,” Gregory said. “We play a great opponent. So there’s no quit in this football team. That is not happening. We’ve had a lot of adversity this year. We’ve had some tough times, but our team has fought the entire time. We’ve been close. We’ve just got to get over the hurdle.”

The Sun Devils have also faced chaos but it's been on the field and mostly due to inconsistency. The same Sun Devils that were routed by Washington State at home two weeks ago rebounded with a thorough 31-16 drubbing of USC last Saturday.

Arizona State is still only one game behind Utah in the Pac-12 South standings, although the Utes won the head-to-head matchup. The Sun Devils must avoid a stumble in Seattle — a place they’ve lost in their last two visits — if they want to have a chance should Utah slip up.

This week begins an audition for Adams at the helm of an offense that has underperformed all season. The Huskies rank in the bottom third nationally in several major offensive categories and 10th in the Pac-12 in total offense and scoring.

The Huskies managed just 166 total yards last week against Oregon and Adams sounded open to making personnel changes, including a possible change at quarterback, where Dylan Morris has struggled.

“It’s too late in the season to go and reinvent the wheel, right,” Adams said. “Us going in there and trying to reinvent the wheel is not giving our players, not setting them up for success. We’re going to go back and look at the things that we did this season that gave us success and we’re going to try to build on that.”

Arizona State QB Jayden Daniels hasn’t been at his best the past couple of weeks. Daniels has four interceptions and one touchdown in the last two games, and was just 11 of 20 for 145 yards last week against USC.

Getting back on track against Washington won’t be easy. The Huskies pass defense has been one of their few strengths. They held Oregon QB Anthony Brown to 98 yards passing last week.

“It’s working progress, there’s no doubt about that. But we’ve seen what it can look like,” Arizona State coach Herm Edwards said. “I think UCLA was a good game when it all came together, our running game and our passing game. So we still have an opportunity to next three weeks to clean that up.”

For the third straight week, Arizona State will be facing a team with an interim head coach in place. Two weeks ago, it was Jake Dickert at Washington State. Last week it was Donte Williams at USC. And now, it’s Gregory.

“Whoever is going to take over obviously will go about his business, but I think the thing is, it’s all about the players, making sure the players can perform well,” Edwards said.

Gregory last stepped into the interim role after Chris Petersen departed Boise State for Washington in 2013. Gregory was asked to lead the Broncos in the Hawaii Bowl, where Boise State got thumped by Oregon State 38-23.

“This is a different team. Really a different situation,” Gregory said. “I think our guys are highly competitive, playing against a really good opponent. And we’re not in Hawaii.”