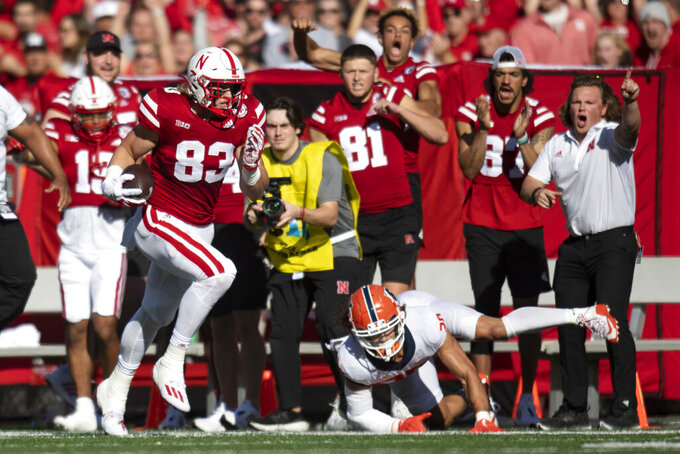 Nebraska's tight end Travis Vokolek (83) breaks a tackle to score a touchdown in the second quarter during a football game between Illinois and Nebraska, Saturday, Oct. 29, 2022 at Memorial Stadium in Lincoln, Neb.(Noah Riffe/Lincoln Journal Star via AP)

PISCATAWAY, N.J. (AP) — Greg Schiano believes there is more to football than blocking, tackling, schemes, blitzes, run-pass options and whatever else is involved in the game.

Football teaches life lessons, the 56-year-old Rutgers coach said. It's about players and coaches working hard for a common goal, building relations and reacting to success and adversity while attending college, a job of sorts. It's a microcosm of society.

Schiano loves to talk about life when the opportunity presents itself, and November is a good month for that. It starts with Tuesday's Election Day and quickly turns to Veterans Day.

“Right now, our political landscape is really hard, right? Things are a mess,” Schiano said. “I think everything fits together for them. And we talk about, look, people fought so we could have the ability to vote. If we don’t vote, it’s in vain.”

Schiano started to answer another question, and then he quickly stopped.

“Fought and DIED,” he emphasized.

Many schools at all levels try to help athletes either by helping them get absentee ballots or letting them go home so they can vote.

Scarlet Knights senior cornerback Avery Young said the program has done a good job of working with the players so they can find time to vote.

“I do mail-in ballots so I definitely get my vote,” Young said.

Young has discovered that being a popular player has given him a chance to talk about social issues important to him.

“I’ve worked really hard to get to where I am right now,” the Coatesville, Pennsylvania, resident said. “I feel like I have a bigger platform on the bigger stage to express the topics of discussion that I want to push and the things that are important to me in my community.”

Ryan Day, the coach of No. 2 Ohio State, has noticed players may not be as interested in this midterm election. However, he said his players are educated and have strong opinions.

“But they’re all in that room together with all kinds of backgrounds,” he added. "I think the thing that I’ve really learned to appreciate is they really do appreciate where other guys are coming from, whether it’s political beliefs or just backgrounds in general, and they do share. And I think it’s neat. I think that’s what’s special about the game of football.”

The NCAA is allowing teams to play and practice on Election Day after making it a mandatory off day the past two years to allow athletes to participate in civic engagement.

The move came on the recommendation of the Student-Athlete Advisory Committee, which called for allowing athletes who are in season to have activities on Election Day if they are provided another day off in the 15 days before or after that date for civic engagement opportunities.

Rutgers defensive lineman Mayan Ahanotu, whose father played in the NFL for 12 seasons, is part of a group of football players that works in the community. He mentors young men in the Middlesex Juvenile Detention Center.

“It’s pretty much we go out and help the community as much as we can,” Ahanotu said. “So voting is a big part of that. So we encourage all of our guys to go out there and vote and we push, push voting because if you want to impact and create change, then the first thing you’ve got to do is vote.”

The head of the athletic department’s diversity, equity and inclusion efforts had a simple message.

"Get out and vote,” Joseph recalled, adding as a coach he can tell his players to vote but he can't make them.

“There are a lot of good things and bad things going on in this country,” Vokolek said. "Every city, state has their own problems. I wouldn’t say there’s one. I’m not going to put that out there. But back to voting, I think it’s important for student-athletes to get out there and vote.”

“If you’re going to vote, I would say have an educated decision on that," he said. “So make sure you do your research and make sure you study it before you go out there and hit the polls.”