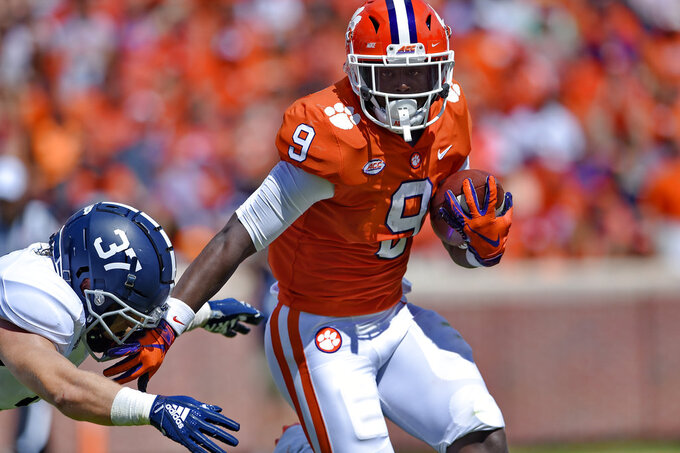 CLEMSON, S.C. (AP) — A week of worry at Clemson over an approaching hurricane ended with a 38-7 victory over Georgia Southern on Saturday in front of a full crowd.

Travis Etienne ran for 162 yards and two touchdowns for the No. 2 Tigers (3-0) and Trevor Lawrence threw for 194 yards, including a 57-yard score to fellow freshman Justyn Ross in their first meeting with Georgia Southern (2-1) of the Sun Belt Conference.

Clemson was the lone major conference school in the Carolinas and Virginia to play, although school officials did move up the game to noon instead of its planned 3:30 p.m. start in deference to Florence, a one-time Category 4 hurricane that was a slow moving tropical storm by Saturday.

At kickoff, though, the crowd of 79,844 had sun and mild breezes for tailgates like many football Saturdays. Conditions changed by halftime with bands of grey clouds over the stadium and the wind picking up. Florence's drenching rain was forecast to hit the area Saturday night.

ATHENS, Ga. (AP) — Jake Fromm threw three touchdown passes and Elijah Holyfield ran for 100 yards, each playing only the first half for Georgia.

Georgia (3-0) led the Blue Raiders (1-2) 42-7 at halftime. It was an impressive warmup for the Bulldogs' stretch of seven straight Southeastern Conference games, beginning next week at Missouri. There were clouds but no rain in the game that was moved up to a noon kickoff due to Tropical Storm Florence.

Freshman Justin Fields ran 15 yards for a touchdown in the first half and threw a touchdowns pass in relief of Fromm. Jeremiah Holloman caught three passes for 90 yards, including an 11-yard scoring pass from Fromm in the first quarter. Mecole Hardman had a touchdown catch and a 70-yard punt return touchdown, and Tyler Simmons had a 56-yard touchdown run.

AMES, Iowa (AP) — Kyler Murray threw for 348 yards and three touchdowns and Oklahoma held off Iowa State 37-27 in the Big 12 opener for both teams.

Marquise Brown had 191 yards receiving and a TD to help the Sooners (3-0), a year removed from a stunning home loss to the Cyclones, extend the nation's longest road winning streak to 17 games.

Iowa State (0-2) rallied from a 14-point halftime deficit to make it 34-27 late in the third quarter. But the Sooners killed nearly eight minutes on a drive that ended with a 42-yard field goal from Austin Siebert with 2:51 left, and Parnell Motley's interception with 1:11 to go sealed.

Backup Zeb Noland threw for a career-high 360 yards and a pair of long touchdown passes to Hakeem Butler for the Cyclones. Starting quarterback Kyle Kempt sat out with a knee injury.

Costello threw interceptions on two of the first three drives of the game for the Cardinal (3-0) before settling in a bit against the overmatched Aggies (2-1).

The game kicked off at the unusually early time of 11:01 a.m. local time in front of a sparse crowd at Stanford Stadium. The Cardinal even played without star running Bryce Love, who got the week off to heal some minor ailments. Costello finished 17 for 30 for 214 yards with two TDs and two interceptions.

The defense did the rest against a UC Davis team that averaged 49 points per game and more than 500 yards of offense in season-opening wins over San Jose State and San Diego.

McSorley completed 11 of 22 passes for 229 yards with an interception and ran for three touchdowns for the Nittany Lions (3-0). He has 24 rushing TDs, two more than Daryll Clark's previous mark.

The Hurricanes (2-1) never trailed and led 21-0 late in the first half, but Toledo (1-1) twice pulled within a touchdown.

The Hurricanes lost standout safety Jaquan Johnson late in the second quarter to an apparent injury. He was back on the sideline using a stationary bike during the second half.