Analysis: At scandal-torn USC, can integrity save Helton? 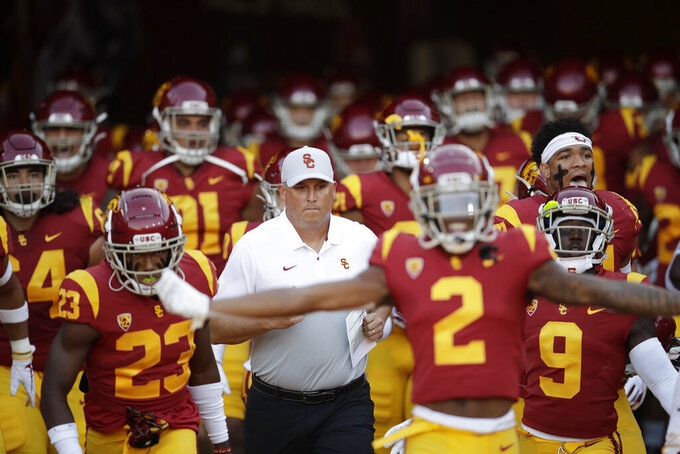 Academic gowns. Flags and banners. The USC Trojan Band played for 45 minutes straight. "Fight On" and on and on.

The ceremony Friday lasted about two hours on a typically beautiful day in Los Angeles. It was both celebratory and somber. USC has a new president because the school has way bigger issues tearing at its reputation and credibility than its football team's struggles under coach Clay Helton.

"I will see you at the Coliseum and we will have a great victory tonight," said Rick Caruso, the billionaire businessman and chairman of USC's board of trustees, as he concluded the affair. "Fight on!"

Helton's team did just that, bouncing back from an overtime loss the week before at BYU to beat a Utah team considered one of the best in the Pac-12. And the Trojans (3-1) did it with Urban Meyer, the currently retired coaching great who many USC fans would like to see replace Helton, in the building.

"SC got heart!" defensive back C.J Pollard yelled as he swaggered back to the locker room under the Los Angeles Coliseum. "We beat the 10th ranked team with a third-string quarterback. SC got heart!"

Every week is a referendum on Helton, the fourth-year coach who has brought peace and professionalism to a program that has been lacking in those areas for about a decade. But he has not won enough by USC's lofty standards. So Helton's future as coach of the 21st-ranked Trojans is murky at best. The school is searching for a new athletic director, whose first major task could be to hire a football coach at USC for the fourth time in the last 10 years.

"I think this is a mentally tough bunch," Helton said Friday night of his team. "And I know some folks have made fun of me for 'So what, now what?' But that's our motto. Stuff is bad sometimes, but it is: 'What are you going do to? Are you going to make an excuse or are you going to find a way to get the job done?'"

The job facing Folt, the former University of North Carolina president, is far more daunting than Helton's. Over the last year, USC has been embroiled in multiple scandals, including a criminal sexual assault case involving allegations against a school doctor and the college admissions fiasco in which parents were bribing their children's way into the college through phony athletic profiles.

"These are problems that have harmed our reputation and have taken a real toll on the Trojan community," Folt said during her speech. "I want to assure you we will tackle these problems until they are corrected."

It is impossible to know how much influence Folk will have in deciding what happens with Helton. Before her inauguration, she shot down rumors about attending a dinner with Meyer, who was in town for his job on Fox's new pregame show. "Big Noon Kickoff" did a special episode from the field at the Coliseum on Friday night, adding another storyline to one of the most eventful days in recent USC history.

Fans clustered in the end zone stands facing the Fox set before the game to get a glimpse of Meyer, but he wasn't even the main attraction. Former USC star Reggie Bush was attending a Trojans game for the first time since the school was forced to disassociate with the 2005 Heisman Trophy winner as punishment for NCAA rules violations during the football program's most recent dynasty.

Bush was serenaded by fans with chants of "Reg-gie!" and "Free Reggie" throughout the night. USC running back Markese Stepp handed Bush the ball after scoring a fourth-quarter touchdown. That drew a 15-yard penalty.

As for Meyer, there were brief "Hire Urban" chants from the fans.

About that: First off, it is plausible in a Pac-12 that is far from fierce, the Trojans could rattle off enough victories to make it near impossible for USC to justify firing Helton and paying a buyout speculated to be about $18 million.

Secondly, considering Meyer was suspended by Ohio State last year for three games for giving too much slack to an assistant coach who was accused of domestic violence, is that a hire USC and Folt would be willing to make?

During Caruso's introduction of Folt, he said: "We are here knowing something has been lost. We're here to get it back."

What USC has lost is its integrity. But by all accounts, that's not a problem with its football coach.

On Friday night, after starting quarterback Kedon Slovis was knocked out of the game on USC's second play, Matt Fink stepped in and lit up one of the Pac-12's best defenses. Fink is a fourth-year junior who was buried on the depth chart after spring practice.

So, of course, he looked to transfer. As a graduate he could have played right away for a new school. Not only did Fink enter the NCAA's transfer portal so schools could recruit him, he took an official visit to Illinois. He did so with Helton's blessing and an open door to return.

"I said: 'Matty, if you choose to leave, I love you and I support you. But I want you to know the door is always open here,'" Helton said Friday night. "'I'm not totally sold that it's the right decision. But it's a decision that you've got to make personally.'"

After the game, as Helton was making his way off the field, he and Meyer caught eyes from afar. They pointed to each other and Meyer appeared to say, "Good job."

It would be hard to argue Helton is a coach in Meyer's class. Even on Friday night, USC played like a talented but sloppy team.

There is, though, a certain irony in what is going on at USC right now. At a time when the University of Southern California is trying to restore its honor, the one football coach it has had over the last two decades who has steered clear of drama and scandal might get run out the door.