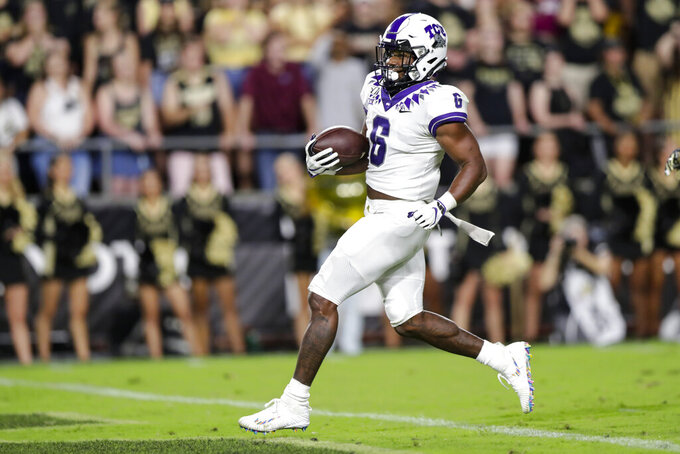 TCU running back Darius Anderson runs in for a touchdown against Purdue during the first half of an NCAA college football game in West Lafayette, Ind., Saturday, Sept. 14, 2019. (AP Photo/Michael Conroy) 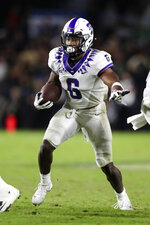 Sewo Olonilua chipped in with 106 yards rushing and a score for the Horned Frogs (2-0).

"They took us to the woodshed," Purdue coach Jeff Brohm said. "It should hurt us and see what we're made of. It doesn't matter who we are missing or not, we have to play better. We obviously gave up too many yards in the run game, gave up too many yards in the zone read game. But we didn't help out our offense early on and as we got it going longer, it became a little rough for us."

After the teams traded field goals, Anderson scored on a 32-yard run to put TCU ahead 10-3 with 1:14 left in the first quarter and the Boilermakers trailed the rest of the way.

Redshirt freshman Jack Plummer completed 13 of 29 passes for 181 yards with two interceptions for Purdue (1-2). Plummer started in place of Elijah Sindelar, who was sidelined with concussion. Sindelar led the FBS with 932 yards passing after two games.

"I knew this would be a tough matchup for first start out of the gate," Brohm said of Plummer. "You know, first interception, (he) put it where we need to put it and we didn't catch a few breaks early on. It wasn't a good performance by even our best players so it was a lot of pressure on him. But he hung in there. And he'll get better. But we've got to get better around him as well."

J.D. Dellinger hit a career-long 53-yard field goal before Jonathan Song's 40-yard field goal pushed the Horned Frogs' lead to 13-6 with 1:09 left in the first half. Max Duggan found a wide-open Al'Dontre Davis for a 22-yard touchdown and Olonilua's 1-yard TD run made it 27-6 in third quarter before Anderson's 8-yard touchdown run pushed the lead to 34-6 in the fourth quarter.

Plummer connected with Amad Anderson Jr. for a 54-yard touchdown with 3:40 left.

TCU has six consecutive victories in its first road game of the season. Entering the game, TCU's 39 road wins since 2009 were third in the nation. The Horned Frogs are 40-14 in that stretch.

TCU: Although the Horned Frogs dominated offensively and defensively much of the game, they had just a 13-6 lead to show for it at halftime. TCU pulled away in the second half with three unanswered TDs. One concern might be just eight completions in 24 passing attempts for 75 yards by TCU's two quarterbacks. Max Duggan was 7 of 18 for 70 yards while Alex Delton was 1-of-6 for 5 yards.

TCU: The Horned Frogs will host SMU on Saturday.

Purdue: The Boilermakers have a bye week before returning home to open the Big Ten season against Minnesota Sept. 28