Anthony Gordon making his mark with Cougars after long wait 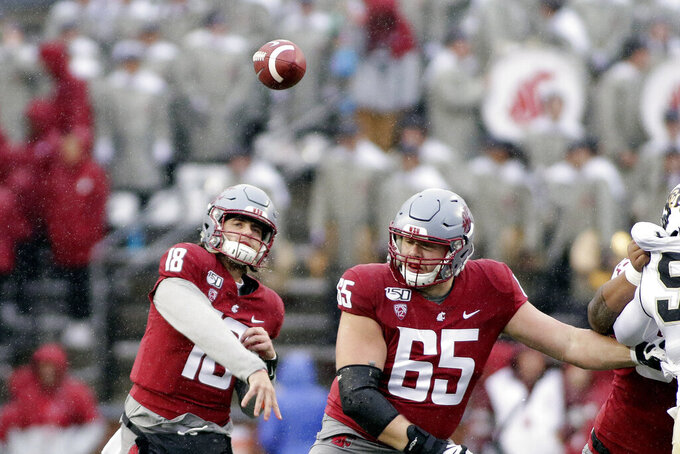 Anthony Gordon waited for years to get on the field for Washington State.

He's certainly has made up for the lost time.

The senior who succeeded Gardner Minshew as the Cougars' starter this season leads the nation with 3,387 passing yards and an average of 423 yards through the air per game.

Gordon has also thrown for 32 touchdowns with only nine interceptions in eight games. He is eyeing the Pac-12 touchdown record set by Washington's Jake Browning (43) and the league record of 4,776 passing yards set by Minshew last season.

Of course, it's not uncommon for a quarterback playing in coach Mike Leach's Air Raid offense to lead the nation in passing since the Cougars throw on most downs, averaging 52 passes a game. But he has been a bright spot during a tough season for Washington State.

Gordon said he gets along well with Leach, who is also the offensive coordinator and quarterbacks coach.

"We see the field the same," Gordon said. "We have the same mindset: Tack downfield and put points on the board."

Coming out of Terra Nova High School in Pacifica, California, Gordon spent his freshman year at City College of San Francisco, where he led the Rams to a 12-1 record during the 2015 season.

He jumped at a scholarship offer from Washington State and redshirted in 2016. He didn't play as a sophomore in 2017.

Gordon competed for the starting the job the following season, only to get beat out during fall camp by Minshew, then an unheralded graduate transfer from East Carolina. Gordon appeared briefly in two games that season.

"I was a little upset about it at the time," Gordon said.

But he said he was determined to be a team player and "learn as much as I could from him and then compete in the spring," Gordon said.

Minshew captivated the Cougars fan base as he led the team to a record 11 victories during his only season in Pullman. He went on to become a sixth-round NFL draft pick and has started eight games for the Jacksonville Jaguars this season.

Minshew's departure opened the door for Gordon, though it wasn't a given he would get the starting job. Washington State picked up another graduate transfer in Gage Gubrud of FBS Eastern Washington. Veteran Trey Tinsley was also in the mix.

To be in a better position to compete, the 6-foot-3, 210-pound Gordon said he put on weight during the offseason, watched more film. Instead of focusing on what the other quarterbacks were doing in practice, he paid attention to his own efforts.

"I knew I was going against some great quarterbacks," Gordon said. "I focused on myself and improving each and every day."

Leach named him the starter about two weeks before the season opener. The results were instant.

Gordon threw for at least 440 yards in each of his first four games, including 570 yards and a conference-record nine touchdowns in a 67-63 loss to UCLA during which the Bruins rallied by scoring 50 points in the second half.

"That's the most impressive performance in regards to touchdowns that ever happened in the Pac-12," Leach said after the UCLA loss. "I thought he played quite well."

Leach said Gordon is smart and confident and learned well from the starters who preceded him, Luke Falk and Minshew.

Gordon "has been very lucky with the guys that played ahead of him," Leach said. "He capitalized on it pretty good."

Gordon acknowledged he picked up some tips from Minshew last year.

"Gardner was great at picking up the energy of the team," Gordon said. "He connected to each player and that's something I have drawn from him this season."

After the UCLA loss, Gordon was limited to 252 yards and one touchdown the next weekend in a loss at No. 8 Utah. But he hasn't thrown for less than 369 yards since. That includes a 38-34 loss at Arizona State and a 37-35 loss at No. 7 Oregon, games in which the Sun Devils and Ducks won on their final drives.

"As an offense, we can do better so it doesn't come down to a last-second drive," Gordon said. "We could have put the game out of reach by scoring more."

The remainder of the Cougars' schedule has them playing at California this week, hosting Stanford and Oregon State, and then finishing against archrival Washington in Seattle.

Gordon's goal in the final weeks is to help lead the Cougars to a fifth consecutive bowl game, which is unprecedented in program history.

"We're looking to win out," Gordon said. "We are confident going into our next four games."