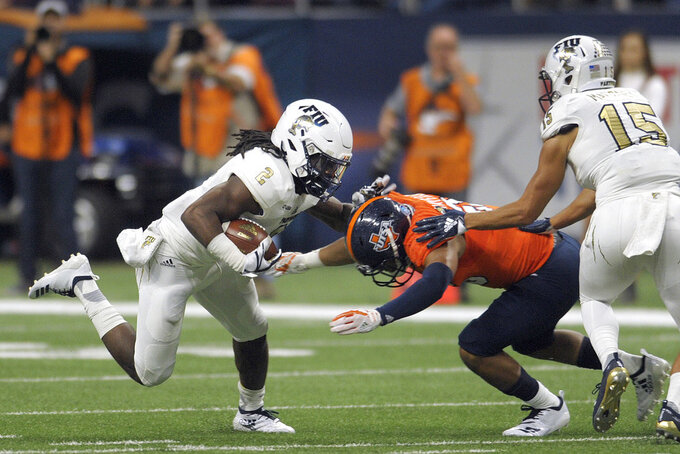 FILE - In this Saturday, Nov. 10, 2018, file photo, Florida International running back Anthony Jones (2) runs for yardage against UTSA's Cassius Grady as Austin Maloney (15) attempts to block during the first half of an NCAA college football game in San Antonio. Jones and a teammate were hurt in a drive-by shooting on Sept. 6, 2018. Jones' wounds have healed and he's playing in the Bahamas Bowl on Friday, Dec. 21, as FIU takes on Toledo. (Billy Calzada/The San Antonio Express-News via AP, File) 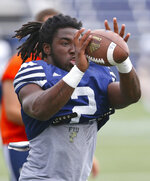 NASSAU, Bahamas (AP) — FIU fumbled away the opening kickoff, gave up a touchdown 23 seconds into the game and found itself trailing by double digits by the end of the first quarter.

They needed a comeback.

And Anthony Jones might know more about comebacks than anyone on the FIU roster.

Jones — one of two FIU players who were victims of a drive-by shooting in September — rushed for three touchdowns, including the clincher with 41 seconds remaining as the Panthers topped Toledo 35-32 on Friday in the Bahamas Bowl. Jones tied a school record with the three scores, and FIU (9-4) set a school record with its ninth win of the season.

"I'm extremely happy for my teammates, these seniors, all my coaches, the support staff at FIU, they were all behind me the whole time," Jones said. "I've been extremely blessed by the man above."

Jones and offensive lineman Mershawn Miller were shot in the city of Opa-locka, Florida — just north of downtown Miami — on the afternoon of Sept. 6. The alleged gunman is in custody and is facing two counts of attempted first-degree murder. Miller was hit in the arm; Jones was shot in the back and the bullet exited just under his eye. He lost about 20 pounds in the days afterward, during which he was fed by tube.

"This is a gift from God," FIU coach Butch Davis said.

Eli Peters had three touchdown passes and threw for 264 yards for Toledo (7-6), which fell in a bowl game for the third consecutive year. Jon'Vea Johnson had two of those TD grabs, and Diontae Johnson had six catches for 98 yards and a score for the Rockets.

It was FIU's second bowl victory. The other came in 2010 — also against Toledo.

"It's been an up and down year," Toledo coach Jason Candle said. "It has had its highlights, and its moments where we weren't so good. Consistency is everything in college football. ... You have to be really consistent, really good at what you do for the long haul and there were times this year that we didn't handle that so well."

Jones scored on runs of 6, 30 and 18 yards for the Panthers. Sterling Palmer caught a touchdown pass and Maurice Alexander rushed for another score for FIU.

Christian Alexander completed 17 of 26 passes for 209 yards and a touchdown for FIU. The Panthers got a huge fourth-down conversion on a pass hauled in by Tony Gaiter IV with 2:40 remaining, the biggest play in a drive where Jones capped the win with his final TD run — the 18-yarder that sealed the win.

FIU played without starting quarterback James Morgan, who has an arm injury. Morgan completed 65 percent of his passes for 2,727 yards and 26 touchdowns in the regular season. FIU also didn't have running back Shawndarrius Phillips, who was left home after a domestic battery charge stemming from a June case became known this month.

And yet, the Panthers had more than enough.

They got on the board when Jones got his first rushing score of the day early in the second quarter, took a 14-10 lead into the half and grabbed the lead for good on Jones' 30-yard run with 3:47 left in the third quarter.

"We just played as a team today, man," Jones said. "Our coaches did a great job preparing us for this bowl game. Hats off to Toledo, but we did a great job today. We made history today."

Toledo: The Rockets scored with two seconds remaining in the game on a 43-yard touchdown pass from Peters to Jon'Vea Johnson, a play where the clock originally ran down to zero before some time was added. The Rockets then tried an onside kick, which FIU linebacker Sage Lewis recovered.

FIU: Jones became the sixth player to rush for three touchdowns in a game for FIU, and the first since Kedrick Rhodes did it in a loss to Louisiana in 2011.

Toledo finished the year with 525 points, the second most in school history. The Rockets scored 549 points in 2011, and this season's total was 16 better than the 509 they posted last season.