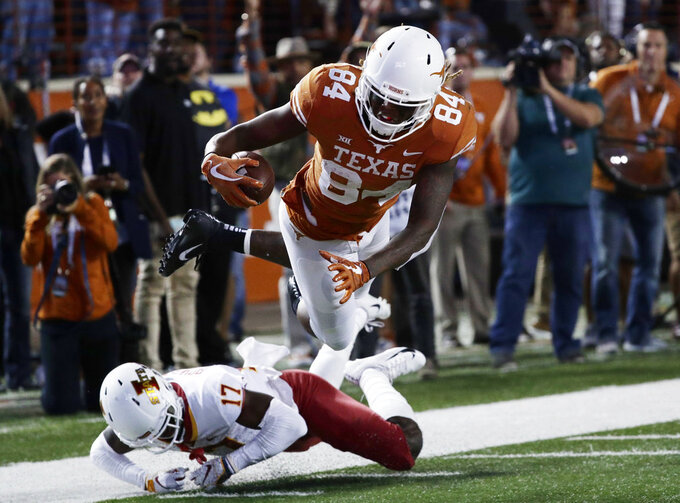 FILE - In this Saturday, Nov. 17, 2018, file photo, Texas wide receiver Lil'Jordan Humphrey (84) leaps over Iowa State defensive back Richard Bowens III (17) to score a touchdown on a 27-yard pass play duinring the second half of an NCAA college football game in Austin, Texas. The Sooners and Longhorns are loaded with playmakers on the outside, but the ones with the best case to be All-Americans are Oklahoma’s Marquise Brown and Texas’ Lil’Jordan Humphrey. (AP Photo/Eric Gay, File) 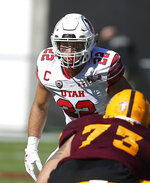 The Associated Press has been honoring college football's best with an All-America team since 1925. The full three-team AP All-America selections will be unveiled in December. The final All-America watch of the season features All-America matchups from each of this weekend's Power Five conference championship games.

No. 2 Clemson vs. Pittsburgh

The Tigers have several All-America contenders, including defensive linemen Christian Wilkins and Clelin Ferrell, linebacker Tre Lamar, offensive tackle Mitch Hyatt and running back Travis Etienne. Yes, Clemson is loaded. The key matchup for Pitt to compete with the Tigers will come along the Panthers' offensive line. Offensive tackle Stefano Millin, a grad transfer from Kent State, has been the best player on a line that has paved the way for one of the best running games in the country. Qadree Ollison has been the beneficiary, rushing for 1,134 yards, 10 touchdowns and 6.44 yards per carry.

No. 6 Ohio State vs. Northwestern

Buckeyes quarterback Dwayne Haskins is ripping up Big Ten passing records, with 42 touchdown passes and 4,081 yards setting new single-season marks. He spreads the ball around enough so that no one receiver has numbers that place him among the nation's leaders, but Parris Campbell has 903 yards and 11 touchdowns to lead the team. The Wildcats secondary has been badly banged up recently. When healthy, cornerback Montre Hartage is one of the best in the Big Ten at his position. He did not play against Illinois, but the Wildcats could really use him to slow down Haskins.

No conference produces All-America candidates at wide receiver like the Big 12, with a combination of quality quarterbacks, up-tempo spread offenses and some less-than-inspiring defenses. The Sooners and Longhorns are loaded with playmakers on the outside, but the ones with the best case to be All-Americans are Oklahoma's Marquise Brown and Texas' Lil'Jordan Humphrey. Brown, nicknamed Hollywood for his hometown in Florida, is only 5-foot-10 and 168 pounds, but he is an elusive game-breaker. The junior averages 105 yards per game, 18.06 per catch and has scored 10 touchdowns. Humphrey is a different model of receiver, but just as difficult to defend at 6-4, 225 pounds. He leads the Longhorns with 72 catches for 1,058 yards and eight scores.

Two of the leading contenders for Pac-12 defensive player of the year and spots on the All-America team at linebacker will be in the middle of a game with a Rose Bowl berth at stake. Utah's Chase Hansen is a converted safety who has been all over the field this season. The 230-pound senior leads the conference and is fourth in the nation in tackles for loss with 22, including five sacks, and has made two interceptions, returning one for a touchdown. Washington's Ben Burr-Kirven is undersized at 6-foot and 220 pounds, but he is a tackling machine, tied for the national lead at 12.92 per game.

There will be a lot of individual talent on the field in Atlanta for a national championship game rematch that features a true All-America matchup to highlight. Tide receiver Jerry Jeudy was a midseason All-American and is Tua Tagovailoa's most frequent target. The sophomore is averaging 19.27 yards per catch and has scored 11 touchdowns in 56 receptions. Georgia counters with one of the best cornerbacks in the country in Deandre Baker, who has two interceptions and nine passes broken up even with teams largely avoiding him.