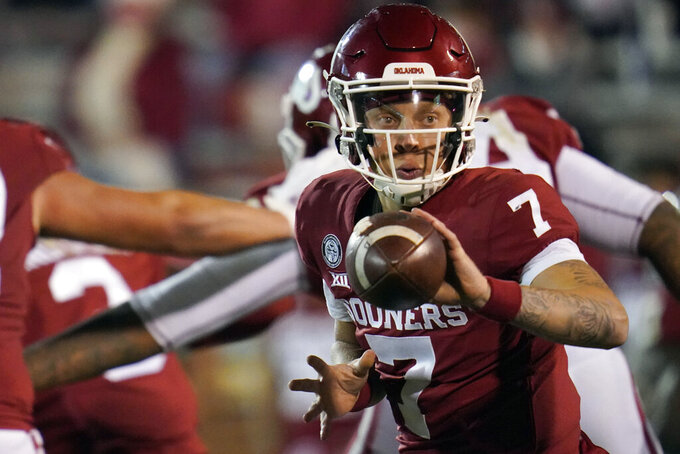 Iowa State running back Breece Hall and linebacker Mike Rose are The Associated Press Big 12 offensive and defensive players of the year after the Cyclones' best conference season ever also earned Matt Campbell coach of the year honors.

The Big 12 runner-up Cyclones will play in a New Year's Six bowl for the first time, facing Oregon in the Fiesta Bowl. They were a league-best 8-1 in Big 12 play during the regular season before a 27-21 loss to Oklahoma in the championship game. The eight conference wins were a school record.

Hall is the Big 12 leader with 130.5 yards rushing per game and 19 touchdowns, and has a TD in every game this season. The sophomore was the unanimous pick as the top offensive player when the AP All-Big 12 team and individual awards were revealed Thursday, as determined by the vote of a panel of 20 sports writers and sportscasters who regularly cover the league.

Rose got 11 of the 20 votes as top defender. The junior is tied for the Big 12 lead with 90 total tackles (8.2 per game) and four interceptions, along with 10 tackles for loss.

Oklahoma redshirt freshman quarterback Spencer Rattler was a first-ream pick and shared newcomer of the year honors with West Virginia senior linebacker Tony Fields II, a transfer from Arizona. Each received seven votes and Fields also got four votes for defensive player of the year.

Texas junior Joseph Ossai, who plays a hybrid position for the Longhorns, got three votes for top defensive player. He got votes for defensive end and linebacker on the All-Big 12 team, enough to be selected second-team at both positions.

Campbell, in his fifth season at Iowa State, got all 20 votes as coach of the year.

Iowa State had four first-team selections for the AP All-Big 12 team, matching Oklahoma and Texas Tech for the most in league.

The 2020 AP All-Big 12 team, as selected by a panel of 20 sports writers and sportscasters who regularly cover the league, with players listed alphabetically with name, school, height, weight, class and hometown. (“u-” denotes unanimous selection):

+=Ossai got votes at both positions; ++=tie for final second-team LB spot.