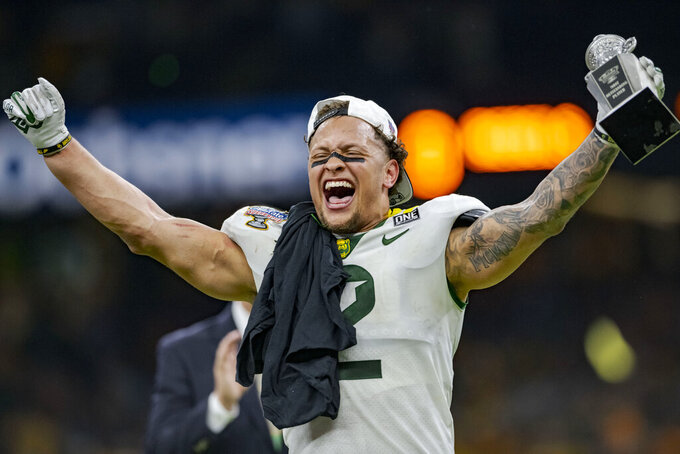 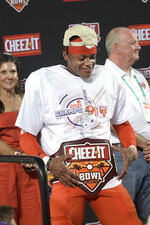 When two of Ohio State’s top receivers opted out of the Rose Bowl to prepare for the NFL draft, Jaxon Smith-Njigba responded by delivering one of the great individual performances in bowl history.

Their ability to keep Ohio State’s passing game thriving even without star receivers Chris Olave and Garrett Wilson made Stroud and Smith-Njigba obvious selections for The Associated Press’ all-bowl team.

With only Monday’s College Football Playoff championship game between Alabama and Georgia remaining on the postseason schedule, AP is releasing its all-bowl team now as picked by AP staff. Since some teams go with 4-3 defenses and others prefer 3-4 schemes, this team includes includes four defensive linemen and four linebackers.

Jordan Mims, Fresno State (New Mexico): He rushed for 165 yards and two touchdowns on 29 carries and also caught five passes for 71 yards and a touchdown in the Bulldogs’ 31-24 victory over UTEP.

Broc Thompson, Purdue (Music City): Thompson is going to need offseason surgery on both knees but still caught seven passes for 217 yards and two touchdowns in a 48-45 overtime victory over Tennessee. He wasn’t the only receiver in this game to produce plenty of highlights. Tennessee’s Cedric Tillman had seven catches for 150 yards and three touchdowns.

Marquis Hayes, Oklahoma (Alamo): Hayes, a left guard, played every snap and helped Oklahoma gain 564 yards, average 8.1 yards per play and allow no sacks in a 47-32 victory over Oregon.

Jamaree Salyer, Georgia (Orange): Salyer started at left tackle in Georgia’s 34-11 victory over Michigan and spent much of the night blocking Heisman Trophy runner-up Aidan Hutchinson, who didn’t post a sack. Hutchinson entered the night with 14 sacks this season.

Dakereon Joyner, South Carolina (Duke’s Mayo): The quarterback-turned-receiver got some work at his original position and completed all nine of his pass attempts for 160 yards and a touchdown. Joyner also had 10 carries for 64 yards.

Jacob Slade, Michigan State (Peach): Slade made six tackles and was credited with 1½ of Michigan State’s five sacks in a 31-21 victory over Pitt.

Terrel Bernard, Baylor (Sugar): Bernard had 17 tackles, two sacks and a pass breakup to lead Baylor to a 21-7 victory over Mississippi.

Nakobe Dean, Georgia (Orange): He had seven tackles – two for loss – plus a sack and a forced fumble to lead a dominant performance by Georgia’s defense. Michigan didn’t score a touchdown until the final five minutes of the game.

Malcolm Rodriguez, Oklahoma State (Fiesta): Rodriguez had 11 tackles, picked off a pass and broke up two others as Oklahoma State erased a 28-7 deficit in a 37-35 triumph over Notre Dame.

Joe Foucha, Arkansas (Outback): Foucha had seven tackles, a sack and an interception in Arkansas’ 24-10 victory over Penn State.

Mitchell Fineran, Purdue (Music City): He went 4 of 4 on field-goal attempts, including a game-winning kick from 39 yards out in overtime. His perfect accuracy gave Fineran the edge over Army’s Cole Talley, who made a game-winning 41-yard field goal as time expired but also missed a 43-yarder.

Bernardo Rodriguez, North Texas (Frisco Football Classic): Rodriguez averaged 54 yards on his five punts with no touchbacks in a 27-14 loss to Miami (Ohio). He had a 70-yarder and a 66-yarder.

Britain Covey, Utah (Rose): Covey scored on a 97-yard kickoff return. Old Dominion’s LaMareon James, Western Michigan’s Sean Tyler and Louisville’s Jawar Jordan all scored on 100-yard kickoff returns in their bowl games. Covey gets the nod because he also scored a touchdown on offense and had three catches for 34 yards.