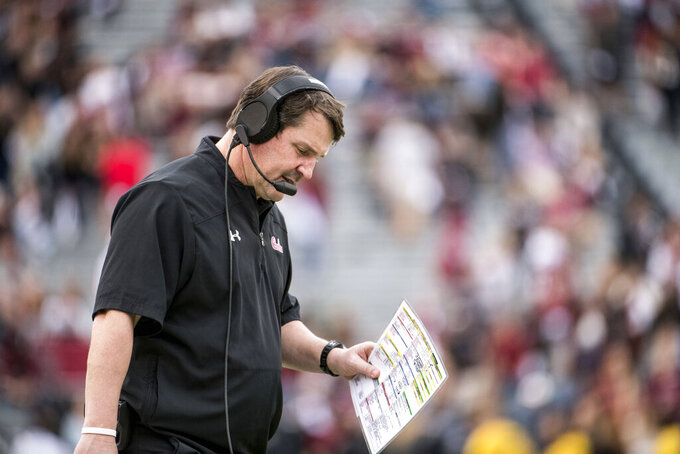 The person spoke on condition of anonymity because the school had not yet made an official announcement.

McClendon was in his second season as Muschamp’s offensive play-caller and fourth overall with the Gamecocks. Werner joined the staff two seasons ago. Dillman was also in his fourth year at South Carolina.

McClendon is considered a strong recruiter and was the program’s receivers coach his first two seasons. It is not yet know what role he’ll have with the Gamecocks going forward.

The moves come after a disappointing 4-8 season where the Gamecocks did not qualify for a bowl game for the first time in Muschamp’s four years. The offense struggled much of the season and was dreadful down the stretch with a total of 24 points and one touchdown in South Carolina’s last three games.

Muschamp said bluntly after a 38-3 loss to rival Clemson on Saturday that changes were coming after his worst season with the Gamecocks, one where he said this summer the team was the deepest and most talented of his time here.

Instead, the offense caved in almost immediately as the team coughed up an 11-point lead in the final quarter of an opening loss to North Carolina. Senior starting quarterback Jake Bentley was lost of the season on that game’s final play.

The team finished averaging 22 points and 371 yards per game, down from last year’s totals of 26 points and 425 yards in McClendon’s first season.

There were also extensive player losses due to injuries. Along with Bentley, starting receiver Bryan Edwards and leading rushers Rico Dowdle and Tavien Feaster spent time on the sidelines after getting hurt to further erode South Carolina’s offensive production.

A frustrated Muschamp said Saturday the Clemson loss that people didn’t complain “when we averaged 425 yards and we averaged over 30 points a game. We've struggled this year. Just call it like it is. There's a lot of different areas at fault and we need to fit it, that's what I'm going to do."