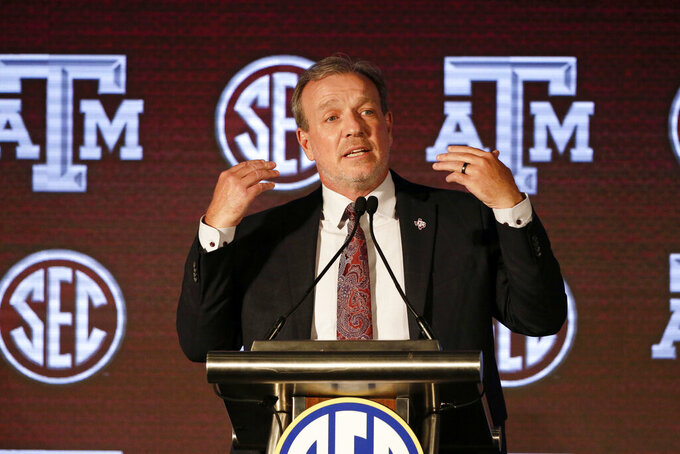 No. 23 Texas A&M won’t play in the Gator Bowl against No. 20 Wake Forest on Dec. 31 because of COVID-19 issues and season-ending injuries, but the Demon Deacons might still get a game.

Two people with knowledge of the situation told The Associated Press on Wednesday night the NCAA Football Oversight Committee will meet Thursday morning to discuss allowing another team to take Texas A&M's place.

The people spoke on condition of anonymity because neither was authorized to speak publicly about options that would be considered.

Among the possibilities are allowing a 5-7 team to take the spot, which is the normal procedure to fill bowl games when there are not enough teams with six victories.

The NCAA uses Academic Progress Rate to rank 5-7 teams for bowl eligibility. Rutgers has the highest APR among the 5-7 teams. The school has informed decision-makers the team could be ready to play on a week's notice, the people said.

The Scarlet Knights have not played since Thanksgiving weekend.

The oversight committee could also consider allowing a team that has already played in a bowl, one of the people said, because that team might be better prepared to take a game on short notice.

There is also a possibility the oversight committee will recommend not filling the spot and calling off the game instead of setting a precedent, knowing there could be more teams knocked out of the bowls by COVID-19 like Texas A&M.

“It is unfortunate, but we just don’t have enough scholarship players available to field a team,” Aggies Jimbo Fisher said in a news release.

The Aggies (8-4) were scheduled to leave for Jacksonville on Sunday.

“It is heartbreaking for our players, coaches, staff and fans that we are not able to play in the TaxSlayer Gator Bowl,” athletic director Ross Bjork said. “Postseason football is the pinnacle of the season and when the opportunity is lost, it hurts on many levels.

“As we have learned in the last 21 months of this health challenge, the well-being and safety of our student-athletes is paramount,” he continued. “Our players poured their heart and soul into this season and we appreciate their dedication as Aggies. Aggie football is on track for long-term success and we know that the best is yet to come.”

The Aggies were down to 38 available players with COVID-19 cases, injuries, opt outs and transfers depleting the roster.

Wake Forest (10-3) is holding out hope of finding another team to play in the Gator Bowl to cap a 10-win season that included winning an Atlantic Coast Conference division title.

Athletic director John Currie said Wednesday that he was “heartened” that at least five teams had reached out to express potential interest in playing, including one team that has already played in a bowl game.

Coach Dave Clawson met with the team captains earlier Wednesday for them to decide whether they wanted to play. The answer was yes, but with a “qualifier” that they didn’t want to work out and practice through the holidays if the game was unlikely to come together.

“I think for our players, in fairness to them, if we’re going to keep them over the Christmas holiday, we probably need to know something fairly early Friday,” Clawson said. “We wanted to give it enough time so there was an opportunity to find an opponent. But again, our players – and you can understand this – if they’re not going to be playing in a bowl game, they wanted to be able to spend the holidays with their families.”

The Aggies had an up-and-down season in which they went 4-4 in Southeastern Conference play. They beat Alabama on Oct. 9 when the Crimson Tide was ranked No. 1 but wrapped up the season with a disappointing 27-24 loss at LSU.