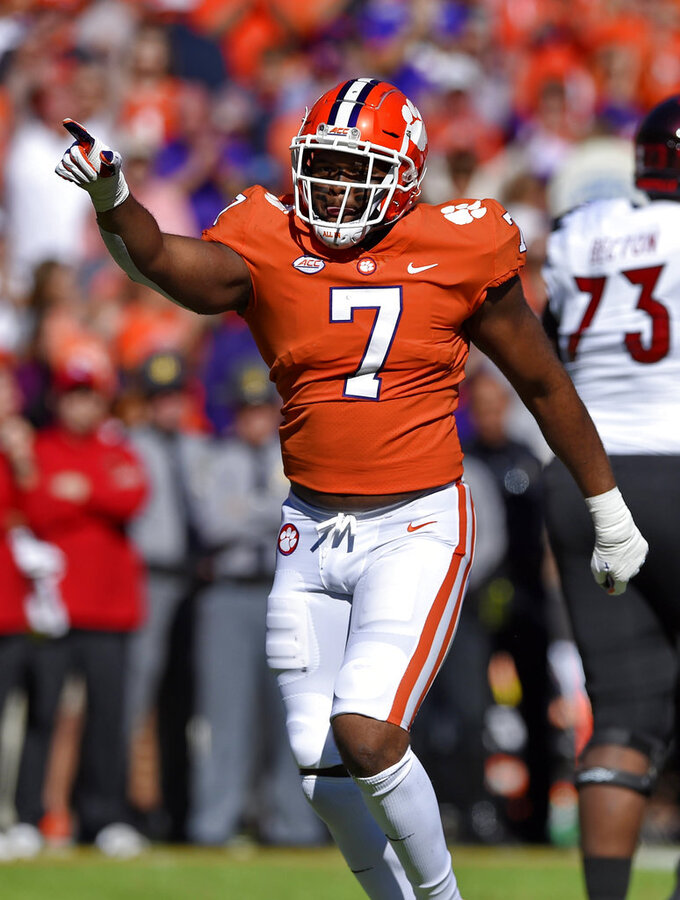 Clemson's Austin Bryant reacts after a tackle during the first half of an NCAA college football game against Louisville Saturday, Nov. 3, 2018, in Clemson, S.C. (AP Photo/Richard Shiro)

Over the last two weeks, the same 12 teams have occupied the top 12 spots in The Associated Press college football poll. Not in the same order, but without much movement.

In that same time, 18 teams have held the spots 13-25 and just one team, Texas, was in the same spot from one week to the other.

The AP Top 25 has never had consecutive weeks where more ranked teams lost than the previous two. In all, 21 ranked teams have gone down the last two weekends. The result, in part, is seven ranked teams that have already lost three times in the 10th regular-season poll. By comparison, over the last six years, there were a total of eight ranked teams with three losses after week 10.

The back half of the rankings is always a little random. The difference between No. 15 and that team buried in others receiving votes always seems bigger than it actually is. Just check out the point spreads for teams ranked in that range. But this year it seems like even more of a guessing game than usual.

Heat check sympathizes with the voters, who have a challenging task. Still, they are not above a critique.

The Tide set season highs in yards rushing (281) and yards per carry (7.59) against LSU as if to remind everyone that — yeah — we have an elite running game, too.

Clemson is the happiest place in college football right now. Only Alabama has won more in recent years, but from the coach to the players to the fans, everyone around the program seems to be enjoying this ride.

Next: vs. Florida State.

They are not quite Nick Chubb and Sony Michel, but RBs D'Andre Swift and Elijah Holyfield have combined for 1,296 yards and 6.4 yards per carry.

Next: vs. Oklahoma State.

QB Kyler Murray became the first Sooners player to reach 300 yards passing and 100 yards rushing in the same game. He is probably the only real threat to Tua Tagovailoa in the Heisman race.

There was as 116-point drop off in poll voting from Oklahoma at sixth to West Virginia at seven, the largest gap in the top 10. The Mountaineers will eventually get the chance to prove otherwise but for now Heat Check agree with the voters. The Mountaineers are in the second tier.

Teams such as Ohio State often get judged not to the standard of the rest of the country, but to their own lofty expectations. It's hard not to focus on the Buckeyes' problems right now.

The power of small sample sizes: One terrific game by the Tigers against Georgia has really changed the entire perception of them and the SEC.

The Knights dropped two spots after allowing 670 yards in a victory against Temple. Yet another reason for UCF fan to feel slighted. This team clearly isn't as good as last season's but considering the other teams around them they probably deserved to at least stay put.

The Wildcats are at four straight games without cracking 17 points. Kentucky is much more similar to the clutter of teams behind it than to the teams ahead of it.

Next: vs. Louisville, Friday.

The Orange won in November under third-year coach Dino Babers for the first time and are a legitimate contenders to reach a New Year's Six game if they can win out. That's not likely against Notre Dame and Boston College, but far from impossible.

Next: vs. San Jose State.

The Aggies and Fresno State are headed for what could be a huge Mountain West conference championship game.

Next: at Texas Tech.

Two straight losses for the Longhorns leading into a tough road trip to Lubbock. This season could very easily turn sour down the stretch for Tom Herman's team.

Heat check: Even with the slump, Texas is a touch too cold.

Next: at Boise State, Friday.

The Bulldogs have held opponents under 30 points in 20 straight games.

The Eagles lead the ACC in interceptions with 14, led by CB Hamp Cheevers with five.

The Bulldogs have allowed two touchdowns in their last four games and just nine this season, fewest in the country. Will it matter against the Tide?

Next: vs. South Carolina.

Another of a group of good defense, not-much-offense SEC teams that includes LSU, Kentucky, Mississippi State and Auburn.

Heat check believes eventually the Huskies will be prove to be the best team in the Pac-12 — which is not necessarily a big deal but could get them to the Rose Bowl.

Inflated expectations and one really embarrassing loss are making this Nittany Lions season seem a bit more disappointing than it should.

Next: vs. Wake Forest, Thursday.

The Wolfpack's final four opponents are a combined 9-25. This team is not nearly as good as last year's, but could end up with a better record.

Voters have finally warmed up to the Cyclones, who are on a four-game winning streak led by exciting freshman QB Brock Purdy.

The Spartans got a breakout game from sophomore RB Connor Heyward (157 yards and two touchdowns on 15 carries). They'll need him to keep it up against the Buckeyes because there is not much offense in East Lansing right now.

Next: vs. South Florida.

In a conference where defense is scarce, the Bearcats are the only team in the American allowing less than 300 yards per game (276.1).

Should be out: North Carolina State and Cincinnati. Should be in: Iowa and Auburn.