AP Top 25 Heat Check: Why not Missouri and Oklahoma State? 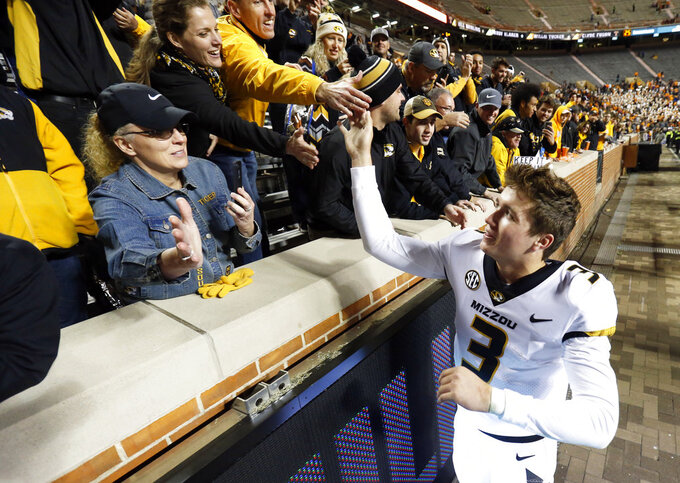 There are four teams that have already lost four games in the latest AP Top 25, about the number that would usually be found in the final poll of the season.

So why not a team with five losses, like Oklahoma State (6-5)? Or Missouri (7-4), which has surged since losing its first four Southeastern Conference games?

Oklahoma State has victories against three teams that did show up in the rankings this week in No. 11 Texas, No. 12 West Virginia and No. 21 Boise State. The Pokes also came within a 2-point conversion of beating No. 6 Oklahoma.

Mizzou has won three straight, including a resounding road victory against No. 13 Florida, since falling to No. 17 Kentucky in a game in which some questionable officiating boosted the Wildcats. The Tigers also played No. 1 Alabama and No. 5 Georgia more competitively than most.

Heat Check is not about to get into a knock-down fight for Oklahoma State and Missouri, but during a strange season with plenty of parity in college football after the first tier of teams they have as a good a case as several teams that are ranked this week.

The voters did make room for Army in the Top 25, which Heat Check enthusiastically endorses.

Not going to worry too much about a sleepy half against The Citadel unless Auburn starts running triple-option, maybe.

Next: vs. South Carolina

The Tigers have not allowed an offensive touchdown when the game was competitive since Sept. 29 against Syracuse.

Next: at Southern California

Red-zone problems are holding back the Wolverines. They are converting trips inside the opponents 20 into touchdowns only 58 percent of the time (91st in the nation). Michigan settled for six field goals against Indiana, none longer than 33 yards.

Next: vs. Georgia Tech.

Bulldogs fans got to enjoy QB Justin Fields in the rout of UMass. The five-star freshman had 100 yards rushing, 121 yards passing and accounted for three touchdowns.

Here's the argument for giving QB Kyler Murray the Heisman: The Sooners defense is so bad they need to their quarterback to be great more than Alabama needs Tua Tagovailoa to be great.

Coach Mike Leach is 132-82 in 17 seasons at Texas Tech and Wazzu, though this is just his second double-digit victory season.

Next: at South Florida.

The more Heat Check watches Oklahoma, the more it believes the Knights should be ranked higher.

Before the season, most Tigers fans would have signed up for nine victories. But how would they feel if that's all they end up with now?

The Buckeyes have allowed 20 plays of 40 yards or more, same number as Hawaii. Ohio State is a top-10 team because there has to be 10 of them.

The Longhorns had not won eight regular-season games since 2013. This is what progress looks like.

The Mountaineers beat Texas. Not that long ago.

Heat check: Too cold, flip flop with the Texas.

Next: at Florida State.

The Aggies' dream season was nearly sidetracked by a Colorado State Hail Mary.

The Nittany Lions are one victory away for squeezing the absolute most out of a season, without really doing anything special.

Next: at No. 7 Washington State.

The Huskies could ruin the Pac-12's playoff hopes by beating the Cougars, but also pretty much assure the conference gets two teams in the New Year's Six instead of one. Might be a good trade-off.

The Wildcats mustered up some offense against Middle Tennessee and they should be downright potent against whatever is left of Louisville.

The Utes took a circuitous route to their first Pac-12 South title, but beat BYU and Utes fans have nothing to complain about this season.

Next: at Boston College.

It has been obvious for weeks the Orange were over-ranked, but would they have been that helpless against Notre Dame with a healthy QB Eric Dungey?

That New Year's Six bowl bid could still be in play for the Broncos (or Aggies or Fresno State) if they can win out and UCF is upset in the AAC championship game.

The Bulldogs have been dominant against lesser opponents and mustered 16 points in their losses.

The Black Knights have their first ranking since 1996, a stunning accomplishment considering how long Army had been practically noncompetitive against FBS competition.

The only FBS team to lose to North Carolina will play for the Atlantic Coast Conference championship against Clemson in two weeks. It has been a strange season in the Coastal Division, but credit Pitt for getting better.

Next: vs. Kansas State.

The Cyclones have played the third-toughest schedule in the country, according to the Sagarin Ratings. And they still have a chance to have consecutive eight-win seasons for the first time since 1977 and '78.

Should be out: Northwestern and Pittsburgh. Should be in: Missouri and Oklahoma State.