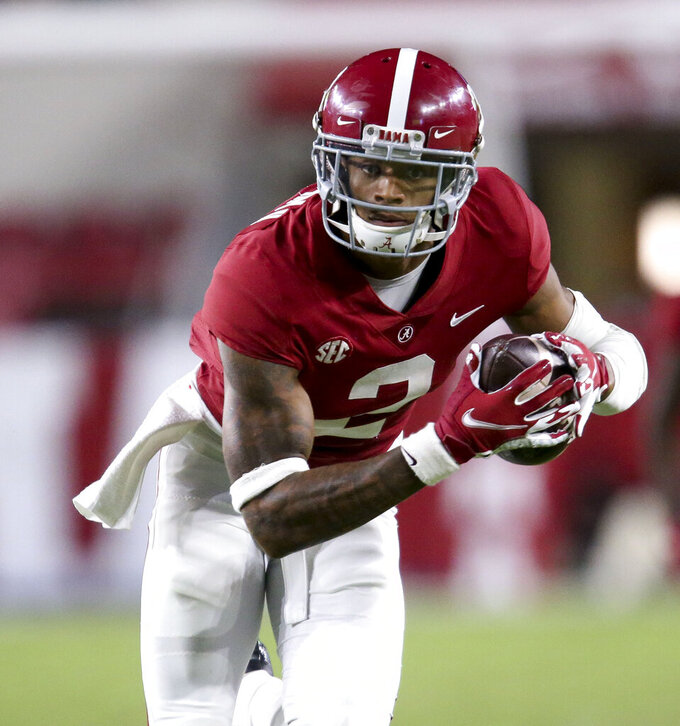 Alabama defensive back Patrick Surtain II (2) returns an interception for a touchdown against Mississippi State during an NCAA college football game Saturday, Oct. 31, 2020, in Tuscaloosa, Ala. (Gary Cosby Jr./The Tuscaloosa News via AP)

Four times in the 84-year history of The Associated Press college football poll, there has been a tie for No. 1, and not since Aug. 26, 2002.

If a single voter who placed Clemson No. 1 and Alabama No. 2 on Sunday had instead flipped the Tigers and Crimson Tide, the Top 25 would have had tie No. 5.

Alas, a chance for an odd piece of poll history was missed. Clemson stayed No. 1 and Alabama stayed No. 2, but they were separated by a mere two points.

Some voters dinged the Tigers for needing a full 60 minutes to put away Boston College on Saturday. Maybe a little harsh considering Clemson's 18-point comeback was led by freshman quarterback D.J. Uiagalelei, making his first career start with star Trevor Lawrence out with COVID-19.

Lawrence will not play next week, either, when the Tigers go to No. 4 Notre Dame. You never know for sure how these things might go, but if Clemson beats the Fighting Irish with its No. 2 quarterback — even if the No. 2 QB is likely a future first-round NFL pick — it's a good bet Clemson will lure back some of those who switched to Alabama this week. Especially with the Crimson Tide off and No. 3 Ohio State hosting Rutgers.

Could also be interesting to see how voters react to a loss by Clemson to a really good team on the road with its backup QB. There's a chance that could be impressive, too.

For this week, Reality Check agreed with the ever so slight consensus that left Clemson on top of the poll this week. There has never been a three-way tie at No. 1 in poll history, but Reality Check sees Clemson, Alabama and Ohio State as 1a, b and c.

Reality check: Questions about that shaky first-half performance by the defense against BC: How much to blame on injuries? How many of the banged up players will be back or in better shape for Notre Dame?

Reality check: The Tide gets a week off to prepare for a revenge game against LSU, which is probably not necessary considering the state of those two programs compared to last season's Tigers' breakthrough in Tuscaloosa.

Next: vs. Rutgers, Saturday.

Reality check: The Irish have become one of the country's best and steadiest programs under coach Brian Kelly. What's missing? 0-5 against top-five teams and 3-8 against top-10.

Next: vs. Florida in Jacksonville, Saturday.

Reality check: The Bulldogs are really good, but appear to be built to win the 2011 national championship.

Next: vs. Houston, Saturday

Reality: How's this for a switch? The Bearcats' defense has overshadowed QB Desmond Ridder, who accounted for nine touchdowns (four passing and five rushing) in blowouts of SMU and Memphis.

Next: at South Carolina, Saturday.

Reality check: QB Kellen Mond is on pace for career bests in completion percentage (64.7%), yards per pass (8.0) and and interception rate (1.3). That's what you want from your senior starter.

Next: vs. Georgia in Jacksonville, Saturday.

Reality check: QB Kyle Trask has thrown at least four touchdown passes in each game. Another performance like that against Georgia and the Heisman Trophy talk can really crank up.

Reality check: The Cougars' are still in need of a victory over a high-quality opponent to validate their dominance. Here you go.

Reality check: The Badgers hope to be back on the field and preparing for a game by Wednesday. That might be overly optimistic.

Next: at North Carolina State, Saturday.

Reality check: The Hurricanes have manage to avoid being dragged into the ACC's mushy middle. Consecutive road games against N.C. State and Virginia Tech will test their ability to stay above the fray.

Next: at Stanford, Saturday.

Reality check: The expectations for the Ducks seem too high considering all they lost from 2019 departures and 2020 opt-outs.

Reality check: The ranking suggests the Hoosiers might be the second-best team in the Big Ten. Reality check is not buying that, but just so you know: Indiana was last ranked in the top 10 in 1969.

Next: at Kansas State, Saturday.

Next: vs, South Alabama, Saturday.

Reality check: The Chanticleers are now the highest ranked Sun Belt team ever.

Next: vs. UMass, Saturday.

Reality check: The Thundering Herd only have three games left, but they have already had three postponed and could make-up a game or two in December.

Next: vs. Baylor, Saturday.

Reality check: DE JaQuan Bailey is one of the Big 12's — maybe the country's — most underrated defenders. The senior is third in the nation with 11 tackles for loss.

Next: at Temple, Saturday.

Reality check: The Mustangs play boom-or-bust defense, second in the American Athletic Conference in tackles for loss with 55 and near the bottom in 20-yard plays allowed at 5.6 per game.

Next: vs. Kansas, Saturday.

Next: vs. Arizona State, Saturday.

Reality check: Can RB Stephen Carr become the Trojans' feature back as a senior? He flashed big potential as a freshman, but not so much since.

Reality check: Boise State wouldn't say why QB Hank Bachmeier did not make the trip to Air Force or whether he could play against BYU, but Southern California transfer Sears was awesome with 280 yards passing and three scores filling in.

Next: vs. West Virginia, Saturday.

Reality check: Playing with a sore shoulder, OLB Joseph Ossai had a season-saving game against Oklahoma State with six tackles for loss, including the game-ending sack.

Next: at Indiana, Saturday.

Reality check: The Wolverines' impressive opening week offense turned out to be a lot about Minnesota's bad defense. Their ranking is probably not deserved.

Reality check: It has come against two very bad defenses (Mississippi and LSU), but QB Bo Nix has completed 70% the past two weeks and not thrown a pick. Progress.

Next: at Virginia Tech, Saturday.

Reality check: The Flames' soft schedule so far makes BYU's look like a gauntlet, but credit to coach Hugh Freeze for getting the program positioned for a second straight bowl game.