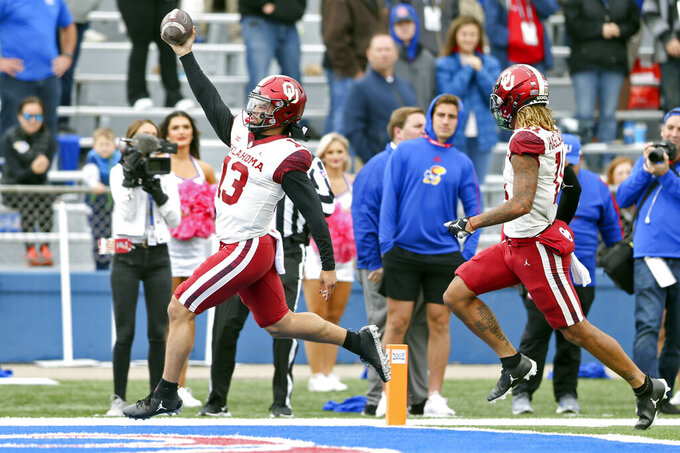 Oklahoma quarterback Caleb Williams (13) holds the ball in the air while scoring a touchdown against Kansas during an NCAA college football game, Saturday, Oct. 23, 2021, in Lawrence, Kan. (Ian Maule/Tulsa World via AP)

“I’m excited for the win, but we played poor football in the first half,” Oklahoma coach Lincoln Riley said.

The Bearcats trailed Navy (1-6) deep into the first half before leading by three at the break. Cincinnati looked as if it had pulled safely away in the third quarter, then needed a late interception to finally seal a seven-point victory.

“We’ve got to find ways, especially on the road, when you’re up, whatever it is, 13 points or something, to kind of close things out,” Cincinnati coach Luke Fickell said. “That’s probably the only thing that I’m somewhat disappointed we couldn’t and didn’t do today, but we needed a challenge and we got one.”

Winning ugly is still winning, and in a season where nine top-10 teams have lost to unranked teams, including two on Saturday, maybe don't get too caught up in style points.

For Cincinnati (7-0), which has nothing else but double-digit victories on its resume, one sluggish clunker is no reason to panic. Almost as important to the Bearcats on Saturday: No. 13 Notre Dame handled Southern California fairly easily to keep their signature victory against the Irish looking good.

For Oklahoma (8-0), the struggles with Kansas looked familiar. The Sooners have won five one-score games, and Saturday would have been six if they didn't punch one in from short range in the final minute.

The emergence of freshman quarterback Williams has brought the explosiveness back to the Sooners' offense. He is a difference-maker. The defense that was expected to be one of the best in the Big 12 is simply not.

So who is better? The Sooners or Bearcats, one of the three American Athletic Conference teams the Big 12 has announced will join the league to help replace SEC-bound Oklahoma and Texas?

Throw away the Power Five benefit of the doubt for the Sooners and it could be a tough call.

Both teams will have winnable homes games next week (OU vs. Texas Tech; UC vs. Tulane) before the College Football Playoff selection committee gets to weigh in, but a Cincinnati-Oklahoma debate could be one of the juicer possibilities for the stretch run.

Wonder who Big 12 Commissioner Bob Bowlsby will be rooting for?

The new overtime rules put in place this season by the NCAA were intended to decrease the chances of marathon games that go beyond three possessions for each offense.

Illinois and No. 7 Penn State blew up that plan with an epic performance of ineffective offense that produced the first nine-OT game in NCAA history.

The Illini and Nittany Lions went through the first two OT periods, matching field goals and tied at 16. The third round now goes to a 2-point shootout under the new rules. One play for each team from the 3 yards out.

Never has 9 feet felt so far away.

The Big Ten teams put up five straight double zeros before trading 2s in the eighth possession. The Illini finally won it in the bottom of the ninth with a score after stopping Penn State.

The Nittany Lions (5-2) have now lost two straight heading into a road game at No. 5 Ohio State next week that is difficult to see being much of a fight with the way Penn State is playing offense.

And the way Ohio State is playing offense. The Buckeyes dropped 44 on Indiana — in the first half.

The Cyclones are now 4-4 against top-10 teams under coach Matt Campbell and 16-2 in October games since 2017. Iowa State is back in the Big 12 race, tied at 3-1 with Oklahoma State and Baylor (which beat the Cyclones) behind Oklahoma.

The Sooners still have to play both the Cyclones and Bears.

Wisconsin started the season ranked 12th and stumbled to a 3-3 start. The Badgers' issues have been all about the offense, but the defense led by Leo Chenal is legit, and it smothered Purdue on Saturday.

The Boilermakers were playing their first game since 2007 as a ranked team after upsetting Iowa last week. That victory brought the Hawkeyes back to the pack at 3-1 in the Big Ten, within range of the Badgers (2-2), who host No. 11 Iowa next week.

Not all the September strugglers are getting their houses back in order.

Clemson was manhandled by Kenny Pickett and No. 23 Pittsburgh, a loss that makes a seventh straight Atlantic Coast Conference championship for the Tigers a long shot.

Can you say Clemson in the Pinstripe Bowl?

AROUND THE COUNTRY: Being an Oregon fan must be incredibly stressful. For the second straight week, the 10th-ranked Ducks' defense needed a late defensive stop to hold on for a victory. Nice to have Kayvon Thibodeaux in those situations. The defensive end and possible first overall NFL draft pick wrecked UCLA, with nine tackles, 4 1/2 for loss, including two sacks. ... No. 4 Alabama has now won 15 straight games against Tennessee. Is this rivalry really worth saving the SEC's divisional setup? ... The U.S. Military Academy has been playing football since 1890 and has never played in a higher-scoring game than it did Saturday. No. 16 Wake Forest beat the Cadets 70-56 to stay unbeaten. The Demon Deacons put up 638 yards on 52 plays and had the ball for only 17:17. ... Penn State messed up what could have been a real doozy of a schedule for the Big Ten next Saturday, but No. 6 Michigan took care of its business. The Wolverines face No. 9 Michigan State in East Lansing next week in what will likely be the first top-10 matchup between the rivals since 1964. ... Both Michigan and former Michigan coach Brady Hoke are 7-0. Hoke's No. 22 San Diego State team beat Air Force with another swarming defensive performance and heads to Fresno State next week for a Mountain West showdown. ... Syracuse might have dealt a decisive blow to Virginia Tech coach Justin Fuente. The Orange handed the Hokies their third straight home loss. It's the third time in Fuente's six seasons that Virginia Tech has lost consecutive games at Lane Stadium. That had happened to Virginia Tech only twice in 29 seasons under Frank Beamer, Fuente's predecessor. ... Speaking of coaches in need of some wins to keep their jobs, Kansas State's 15-point second-half comeback against Texas Tech could leave a mark for Red Raiders coach Matt Wells. ... On the flip side, Miami got coach Manny Diaz a much-needed victory against No. 18 North Carolina State. ... The only team in the country 4-0 against Pac-12 competition is BYU after the Cougars edged Washington State in its first game since coach Nick Rolovich was fired for failing to comply with a vaccine mandate ... #MACtion: Team that almost beat Notre Dame (Toledo) 34, Team that handed Pitt its only loss (Western Michigan) 15.