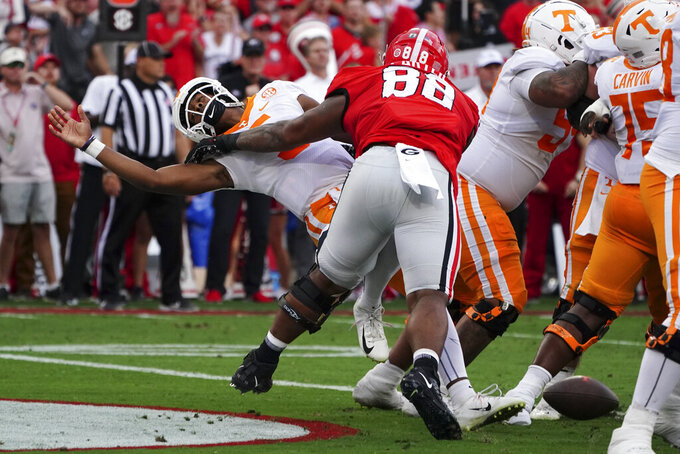 Tennessee quarterback Hendon Hooker, left, fumbles as he is hit by Georgia defensive lineman Jalen Carter (88) in the end zone during the first half of an NCAA college football game Saturday, Nov. 5, 2022, in Athens, Ga. Tennessee recovered the ball and avoided a safety. (AP Photo/John Bazemore)

Georgia has aspired to be Alabama.

Not just a national champion. The Bulldogs did that last year, going through the Crimson Tide to snap a 41-year title drought.

Georgia wants to set the standard in college football, the program that contends for national titles every season and wins them routinely.

The old cliche goes: They don't rebuild they reload. Alabama has taken that to unprecedented levels over 15 years under Nick Saban, winning six national titles.

There is a long way for Georgia to go to match those accomplishments, but Kirby Smart's top-ranked Bulldogs have never looked more like peak Alabama than against No. 2 Tennessee on Saturday.

Georgia dominated the biggest game of the season, easily dispatching the team that just three weeks ago knocked off the Crimson Tide.

As a wild day in college football played out, Alabama lost again, toppled by Brian Kelly and No. 15 LSU in a Death Valley overtime, and Clemson was dispatched from the ranks of the unbeaten in emphatic fashion at Notre Dame. It all only served to re-enforce: It's Georgia's world now.

The Bulldogs smothered the highest-scoring offense in the country. Hendon Hooker, Jalin Hyatt and the Volunteers were getting comparisons to LSU's 2019 team with Joe Burrow and Ja’Marr Chase since putting 52 on Alabama.

The Bulldogs turned off the fireworks.

“I slept better as the week went on, because I felt good about the plan,” Smart said.

Yes, there has been a drop-off with Georgia's defense. It has gone from all-time great to merely the best in the country.

Stetson Bennett, Brock Bowers, Ladd McConkey and the offense broke off big plays early to jump out to a 21-3 lead and then — much the way Alabama used to before it transformed into a quarterback and receiver factory — it bullied the Volunteers for almost three quarters.

It might be time to start taking Bennett more seriously as a Heisman contender.

The Bulldogs spend the next two weeks on the road, at Mississippi State and Kentucky. They look as if they will cruise into another SEC championship game with a playoff spot all but locked up, no matter the outcome.

It's the time of the year when big-game results have to be looked at in the context of the CFP.

Tennessee was first last week. It won't be Tuesday. Georgia will, as the committee catches up to the AP Top 25.

Victories against Alabama and LSU should keep the Vols in the conversation as other conference races are sorted out.

But Tennessee was so thoroughly manhandled, the idea that it might make the playoff over an unbeaten team from another Power Five conference can probably be put to rest.

Of course, not many of them are left.

As for Alabama, the Crimson Tide have lost twice before Thanksgiving for the first time since 2010. Forget the playoff.

Even with Bryce Young's magic, the Tide will need a small miracle just to get back to the SEC championship game now that it is essentially two games behind LSU in the West.

“Tough loss, but there's nobody that feels worse about it than our players,” Saban said.

Clemson clinched its Atlantic Coast Conference division and a spot in the championship game even before it took the field Saturday night.

Then Clemson got exposed as paper Tigers by the Irish.

For the third time in the CFP era, three of the top six teams lost on the same day.

Will all those losses provide a boost for unbeaten Michigan and TCU? Can Clemson recover? It has before from November losses.

All that jockeying is for others to worry about.

Not Georgia. Ten weeks into this college football season, the Bulldogs are without peer.

Tanner Mordecai threw seven touchdown passes and led SMU to 56 points against American Athletic Conference rival Houston — and then they played the second half.

SMU and Houston were only six points short of matching the record of 146 points set by Texas A&M and LSU when they played seven overtimes in in 2018.

Mordecai's seven touchdown passes in the first half tied an FBS record, too. He finished with nine.

“I don’t know when we get to play Houston again, so we wanted to send them back with an ‘L,'" SMU coach Rhett Lashlee told reporters.

The Cougars are heading to the Big 12 next season.

Wonder if anybody from Auburn was monitoring No. 23 Liberty's victory at Arkansas to improve the Flames' record to 8-1 and gave coach Hugh Freeze his first win at an SEC stadium since he was fired by Mississippi. Auburn could use a proven winner, but can it handle the baggage? ... Oregon's Bo Nix was a triple-threat against Colorado with touchdowns rushing, receiving and passing. As playoff and Heisman contenders ahead of them stumbled, it was a good day for the Ducks. ... Mario Cristobal's first season at Miami is turning into one of the worst in school history. Florida State handed the Hurricanes their most lopsided loss in that rivalry since 1997 and Miami has now lost four straight home games for the first time since 1973. ... The weather was miserable, but No. 2 Ohio State's inability to assert itself up front against Northwestern on ether side of the ball was a bit disconcerting for a team heading toward a showdown against No. 4 Michigan. The Buckeyes did set an FBS record with 70 straight games of at least 20 points scored. ... No. 7 TCU did what TCU does, falling behind Texas Tech before surging back to a win in the fourth quarter. At some point this is going to catch up to the Frogs. TCU is 9-0 as a member of the Big 12 for the first time and heading to Texas for yet another huge conference game next week. ... Wisconsin is 3-1 since Jim Leonhard took over as head coach for the fired Paul Chryst a fter smothering Maryland. The Badgers still have rivalry games against Nebraska, Iowa and Minnesota, but Leonhard is not your typical interim and it might be wise to make the marriage official so he can start recruiting with no doubt about his future. ... In other coaching news: It is looking bleak at USF for third-year coach Jeff Scott after the Bulls were drubbed at Temple. Scott is now 4-26. ... Texas A&M got hit with a flu bug that left it playing short-handed against Florida, and the Gators handed the Aggies their fifth straight loss. That's A&M's longest skid since 1980. ... Virginia Tech lost its sixth straight, an awful blown fourth-quarter lead to Georgia Tech. For the Hokies, it's their longest skid since 1987 ... Kansas is going bowling for the first time since 2008. The Jayhawks snapped a three-game losing streak and grabbed win No. 6 against No. 18 Oklahoma State. ... Michigan State shook after a very bad week and upset No. 14 Illinois, making the Big Ten West race wide open. The Illini are 4-2 in conference with a game to come against Michigan. Purdue, Wisconsin, Iowa and Minnesota are all 3-3.