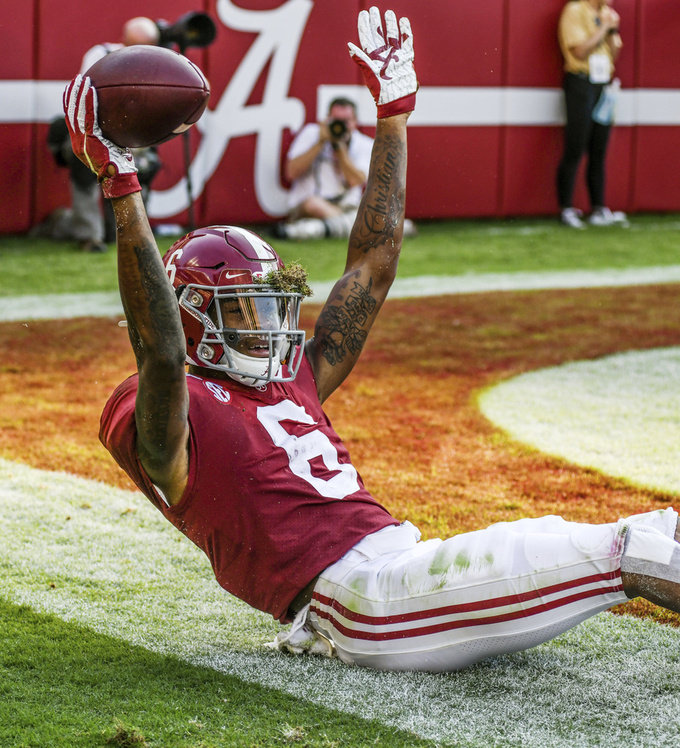 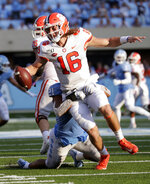 Clemson might relinquish the No. 1 ranking on Sunday when the new AP Top 25 is released, and Trevor Lawrence is probably already out of the Heisman Trophy race.

None of this is a particularly big deal. In fact, it all feels familiar for the Tigers, who held off a late 2-point conversion to win at North Carolina on Saturday in a game where the Tar Heels were about a four-touchdown underdog.

Quibble with coach Mack Brown's decision to go for 2 with 1:17 left if you want. It was the right call. It's never a good idea for a big underdog to play for overtime.

But the story was the defending national champions looking far less than the juggernaut they were expected to be when they were voted preseason No. 1 in the AP poll for the first time in the history of the program.

"I know we're supposed to just destroy everybody," coach Dabo Swinney told reporters after the game, dismissing that as unrealistic.

Sorry, Dabo, but it's impossible to ignore the disparity between Clemson and the rest of the Atlantic Coast Conference, and not expect the Tigers to have their way every week.

This was the first time Clemson has been remotely challenged, though they haven't been as spectacular as, say, Alabama has with Tua Tagovailoa and his loaded group of receivers.

The crux of the Tigers' problems — if you want to call them that — is Lawrence.

Call it a sophomore slump. Maybe he's pressing. Lawrence came into Saturday ranked 55th in FBS in passer rating (147.92), completing 62% of his passes with seven touchdowns and five interceptions.

Against North Carolina, Lawrence was a modest 18 for 30 for 206 yards with a touchdown pass that turned out to the game-winner. But he also missed some throws that could have broken the game open and didn't make some smaller player that keep drives going.

Clemson has been here before.

Almost exactly a year ago, Clemson needed a late rally to beat Syracuse in Death Valley. That was the last close game the Tigers played all season. But that game came at the end of a weird week in which Lawrence replaced Kelly Bryant as starter. Then Lawrence was injured against the Orange. This feels more like Clemson's first championship season in 2016, when Deshaun Watson and Mike Williams were supposed to be unstoppable but took a while to get revved up.

The slow start for Lawrence has put him so far behind Tagovailoa, Oklahoma's Jalen Hurts, LSU's Joe Burrow and Ohio State's Justin Fields in the Heisman race there is likely no coming back. Not when Clemson will be playing North Carolina State, Wake Forest and South Carolina in November.

Watson did not win a Heisman, either.

The sleepy performance at North Carolina could cost Clemson its top ranking, but the Tigers have shown a tendency to round into form. And their ability to win these close games in recent years is why the term Clemsoning has been retired.

Scouring over resumes five weeks into the season is not going to be much help to determine the best team in the nation heading into October. There haven't been all that many big games played.

It's little more than an eye test at this point but right now Ohio State makes a compelling case. Justin Fields has been as good as advertised and defensive end Chase Young is playing like the lost Bosa brother.

"I give a ton of credit to them and their coaching staff because they're a lot better than they were a year ago," Nebraska coach Scott Frost said after the Buckeyes dismantled the Cornhuskers on a big stage.

If Clemson does give up the top ranking, it's more likely that No. 2 Alabama will move up. The Tide are patching things up on defense, but it's hard to notice the flaws because no one can slow down Tua and Co.

No. 6 Oklahoma played some defense on Saturday against Texas Tech. The Red Raiders were playing a backup quarterback, but you can see progress for the Sooners.

The team that is starting to demand more attention is Auburn, which hammered Mississippi State. The Tigers had been piecing things together offensively and trying to protect freshman quarterback Bo Nix. Well, Nix passed for 335 yards against the Bulldogs and suddenly Auburn is starting to look like it belongs in the same class as Alabama, No. 3 Georgia and No. 4 LSU.

Auburn's rise could good news for the Pac-12, which has no unbeaten teams entering October for the first time since expansion in 2011. But at least Oregon's close loss to the Tigers looks like a quality loss. Every little bit helps.

AROUND THE COUNTRY: Unbeaten teams ranked by most surprising: 1, SMU (5-0); 2, Wake Forest (5-0); 3, Minnesota (4-0), which has won its games by a combined total of 20 points; 4, Baylor (4-0). ... The glimmer of hope for Clay Helton that came with last week's USC victory against Utah was not sustainable. Matt Fink looked like a third-string quarterback and No. 17 Washington outclassed the Trojans in Seattle. USC (3-2) has a week off before visiting No. 10 Notre Dame in a game that feels make or break for a coach fighting for his job. ... If Wisconsin's Jonathan Taylor is going to be considered an early Heisman contender than Oklahoma State's Chuba Hubbard deserves a little running back love, too. The nation's leading rusher went for 296 yards in a victory against Kansas State. Hubbard now has three 200-yard games ... The three latest additions to the Big Ten (Nebraska, Maryland and Rutgers) lost 159-7 this weekend ... Hurts passed for a career-best 415 yards in another video-game numbers performance, this time against Texas Tech. Clearly, he will be a major player in the Heisman race in as long as he stays healthy. Will be interesting to see if his NFL stock starts rising as well. Remember, Baker Mayfield and Kyler Murray weren't considered No. 1 overall draft pick material and then they were. ... Alabama receiver DeVonta Smith, he of the walk-off TD to win the national championship two years ago, had eight catches for 221 yards and four touchdowns in the FIRST HALF against Ole Miss. He finished with school records of five TD catches for 274 yards. Smith is generally regarded as Alabama's third-best receiver. ... Who's tanking? Houston beat North Texas 46-25 after Cougars QB D'Eriq King announced earlier this week that he was sitting out the rest of the season as a redshirt with the intention to return next year ... Justin Fuente and Virginia Tech looked like a near perfect marriage in 2016, but the Hokies appear to be in a free fall after Duke handed them their worst home loss in in 45 years.