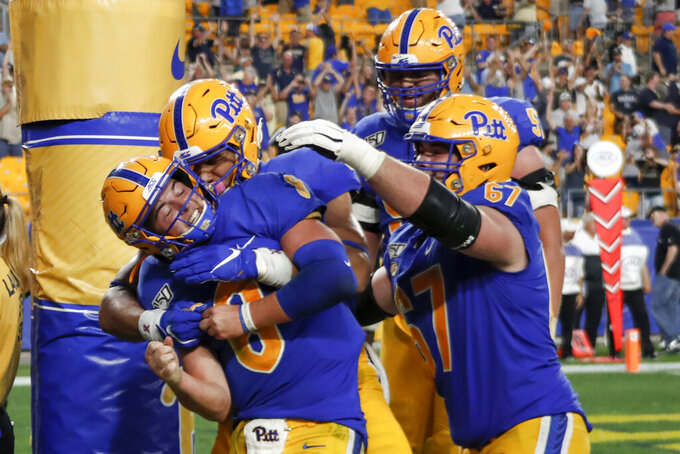 Pittsburgh quarterback Kenny Pickett (8) celebrates with teammates after he caught a pass for a touchdown against Central Florida during the second half of an NCAA college football game, Saturday, Sept. 21, 2019, in Pittsburgh. (AP Photo/Keith Srakocic)

Highlighted by three games matching top-15 teams, this was the first weekend of the season to seriously separate College Football Playoff contenders and pretenders.

Feel free to take a seat at the adults' table No. 8 Auburn and No. 13 Wisconsin. We are looking for teams capable of disrupting the established upper tier in college football this season, led by No. 1 Clemson and No. 2 Alabama. The Tigers and Badgers might — maybe — have the stuff to crash the party.

No. 11 Michigan, you're excused. Playoffs are the last thing coach Jim Harbaugh needs to be thinking about. His program seems to be at a crossroads. No. 15 UCF, which lost a regular-season game for the first time since 2016, will be joining the Wolverines on the don't-call-us-we'll-call-you list.

A year after a season of great expectations went sideways for Wisconsin the country's most self-aware program is back on track. The Badgers never stray far from their successful player development blueprint. Build a big, strong offensive line. Put a workhorse tailback behind it. Play tough and disciplined defense. Wisconsin ripped off four straight 10-win seasons before sliding to 8-5 last year.

The Badgers are back. By beating down Michigan in Madison, the Badgers validated their dominant 2-0 start against weak competition.

The Badgers finally did allow a point after nearly 11 quarters of shutout ball to start the season, and Jonathan Taylor ran for 203 yards, despite sitting out the second quarter with cramps. The Big Ten West looked wide open coming into the season, with Nebraska penciled in as the favorite. The Badgers still face the trickiest schedule in the West, including trips to No. 6 Ohio State and Nebraska, but they are clearly the favorites now.

That Oct. 26 meeting with the Buckeyes in Columbus, Ohio, might be a preview of the Big Ten championship game. Through four weeks, Wisconsin is the only team in the Big Ten that looks like it can challenge Justin Fields and Ohio State.

Auburn was next up, taking care of No. 17 Texas A&M on the road. Auburn has made itself right at home in College Station, Texas, since the Aggies joined the Southeastern Conference, winning all four games there.

The Tigers now have two notable victories in the Lone Star State in September after rallying to beat No. 16 Oregon in Arlington to start the season.

To be fair, Auburn still looks too limited offensively to keep pace with super-charged Alabama and No. 4 LSU. The Tigers also draw both No. 3 Georgia and No. 9 Florida from the SEC East. But if there is going to be a third wheel in the West, Auburn and its nasty defensive line led by preseason All-American tackle Derrick Brown is it.

Later Saturday night, No. 7 Notre Dame and No. 12 Texas had opportunities to make similar statements.

To be clear: Most of the criticism of Harbaugh during his tenure at Michigan has been overblown. Fans like to see blue bloods fail. Especially, when they are coached by a quirky former NFL quarterback with a big reputation and no conference championships.

Harbaugh has three 10-win seasons at Michigan and the program, despite obvious shortcomings against Ohio State, has not been healthier since Lloyd Carr was coach more than a decade ago. At least that is the way it seemed until last Thanksgiving weekend. The Wolverines went to Ohio State favored and looking like a playoff team. They lost 62-39. They then lost to Florida 41-15 in an uninspired Peach Bowl performance. Now, after an offseason remake of the offense, Michigan's first big game of the season was no contest.

Michigan has been outscored by 70 points in its last three games against ranked teams. It is also 0-7 as an underdog with Harbaugh.

"We were outplayed, outprepared, outcoached, the whole thing both offensively and defensively," Harbaugh said. "It was thorough."

This is not a hot-seat situation. Michigan is all in on Harbaugh. But for the first time since he arrived in Ann Arbor in 2015 the trajectory of the program feels like it is headed in the wrong direction. And that leads to the scariest question for Michigan fans: If Harbaugh can't make Michigan a consistently elite program again, can anyone?

UCF AS IN FLOP

Folks were lining up to champion the Knights last week after UCF trounced Stanford. So, of course, the Knights followed it up by losing to Pitt.

Everybody off the bandwagon.

The Panthers' have chaos in the DNA, always good for at least one perplexing loss and equally surprising victory per season. A week after coach Pat Narduzzi called for a bafflingly conservative field goal late in the game that cost his team, Pitt beat the Knights with its own version of the Philly Special on a fourth-and-ballgame.

One loss on the road is not an indictment of UCF. The Knights are formidable. They're just not playoff contenders.

AROUND THE COUNTRY: The last time Appalachian State beat a Power Five team the Mountaineers blocked a kick on the final play of the game to seal one of the great upsets of all-time. North Carolina is no Michigan and App State's latest takedown of a Power Five team was hardly an upset at all ... West Virginia ended Kansas' winning streak at one. ... Eastern Michigan is one of the most entertaining teams in the country. The Eagles have played 27 (14-13) one-score games since 2016. The latest: EMU blocked a punt and returned it for a touchdown with 10 seconds left to beat FCS Central Connecticut. A week ago, coach Chris Creighton's Eagles beat Illinois of the Big Ten with a last-second field goal. Creighton is probably due for a shot at a bigger program. ... Florida State blew another big lead, but this time recovered for a much-needed victory against Louisville. Willie Taggart so desperately needs to calm the waters in Tallahassee ... Speaking of pretenders, No. 10 Utah rammed into its ceiling at Southern California on Friday night.