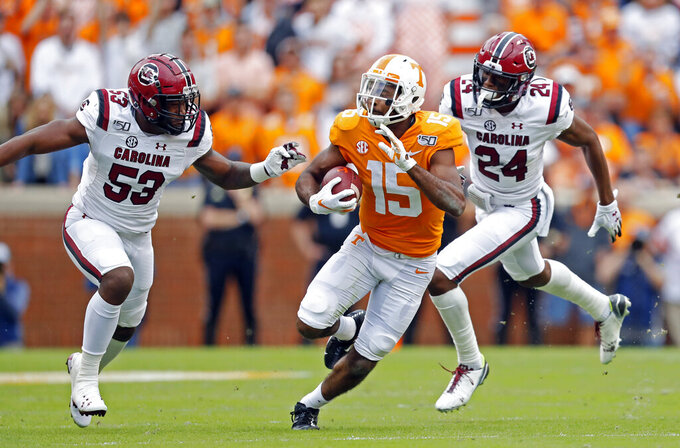 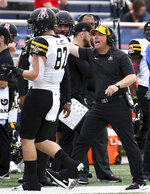 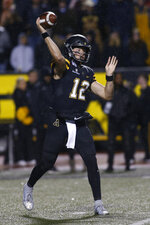 COLUMBIA, S.C. (AP) — Appalachian State is looking to knock off yet another Power Five opponent when they play at South Carolina.

Even though the Mountaineers lost their Top 25 ranking, their undefeated win steak and a potential shot at playing in the Cotton Bowl last week, they have not lost their taste for toppling Power Five opponents.

They'll get another shot Saturday against the Gamecocks (4-5), who are looking for a fourth straight bowl appearance under coach Will Muschamp. No one on South Carolina is underestimating the Mountaineers, said linebacker Ernest Jones.

"We're definitely not going to overlook them," Jones said. "They were undefeated until last week."

The Mountaineers (7-1) were No. 20 last week and carried a 13-game win streak into a home game with Georgia Southern, which derailed all that with a 24-21 victory. The loss all but ended App's hopes of finishing as the highest ranked team from the group of five and earning at-large slot for a "New Year's Six" bowl appearance.

But Jones said the Gamecocks are well aware that Appalachian State has already defeated North Carolin a this season — the 34-31 win at Chapel Hill was the Mountaineers first Power Five win since winning at Michigan as an FCS team in 2007. That Tar Heels team beat South Carolina earlier this season.

Still, Appalachian State is 0-7 all time against Southeastern Conference teams.

Drinkwitz knows the challenge now is to keep his team focused on what's ahead instead of last week's disappointment.

"It's going to be a tremendous challenge for our guys, a great game for us to refocus," he said.

South Carolina appeared to turn a corner from a 1-3 start after an upset of then-third-ranked Georgia in double overtime, 20-17, last month.

But losses to Florida and Tennessee in consecutive weeks pushed their postseason chances to the edge. The Gamecocks must win two of their final three in a challenging closing stretch that concludes with a trip to Texas A&M and a home game with state rival, No. 4 Clemson (No. 5 CFP).

Some other things to watch when Appalachian State takes on South Carolina:

Appalachian State and South Carolina have played nine times, all before the Gamecocks joined the SEC. The Gamecocks have won eight of nine, including the last one, a 35-9 victory in 1988. The Mountaineers lone win over South Carolina came in 1975, 39-34. All the games have been at South Carolina, although the teams are scheduled to play in Boone, North Carolina, in 2025.

South Carolina is expected to get starting running back Rico Dowdle back against Appalachian State after missing most of the past three games with a knee sprain. However, the Gamecocks might be without leading rusher Tavien Feaster, who has missed some practice time this week with a groin injury. Feaster, a graduate transfer from Clemson, tops all runners with 625 yards and five touchdowns. Muschamp said Feaster is questionable to play against the Mountaineers.

Appalachian State is among the country's most successful road teams since moving into the FBS in 20014. The Mountaineers have 22-11 in road games. The only teams with more wins on the road in that span are Boise State, Clemson and Oklahoma with 24 and Ohio State with 23. San Diego State is tied with Appalachian State with 22 victories.

South Carolina will honor a class of 25 seniors, including several with decisions to make about their futures including injured starting quarterback Jake Bentley. Bentley was lost for the season with a foot injury on the final play of the opening week loss to North Carolina. He's had surgery and, never having taken a redshirt, can return to South Carolina for a final season. Muschamp has said Bentley's recovery is progressing and will talk after the season. .

Appalachian State was the first Sun Belt Conference team to start 7-0 since the league was formed in 2001. The Mountaineers are also first league school to spend more than one week in the national rankings. Success at South Carolina and the Apps might re-enter the Top 25.