Arizona looks to be more consistent against Houston 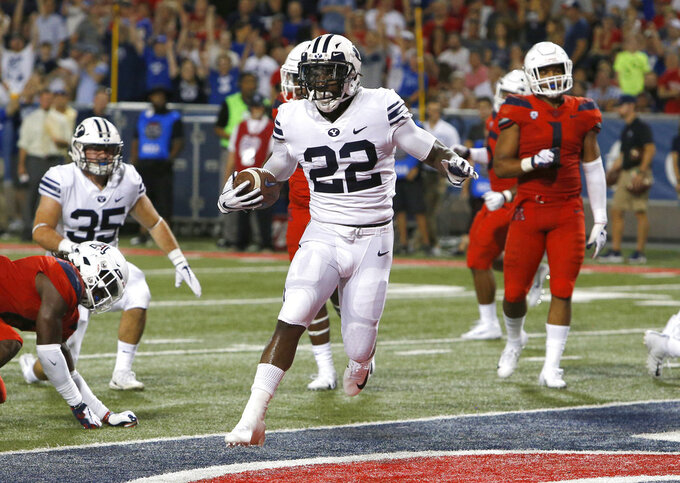 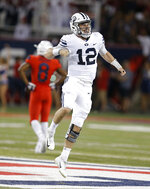 HOUSTON (AP) — Arizona coach Kevin Sumlin wants to see more consistency from his team after the Wildcats struggled to score for the first three quarters in a 28-23 loss to BYU.
He hopes the changes start Saturday when the Wildcats (0-1) travel to face his former team in Houston (1-0).
"We have to be more consistent for four quarters," Sumlin said. "If you run 42 plays in the first half and have 10 points, that's not the efficiency that you need."
The Wildcats took the lead against BYU with less than a minute before halftime, but the Cougars scored 21 unanswered points while Arizona ran just 11 plays in the third quarter.
"To fix those issues, it's not offense or defense or special teams," Sumlin said. "The third quarter was a team."
Quarterback Khalil Tate was 17 of 34 for 197 yards and a touchdown last week, but top wide receiver Shun Brown only had one catch for 11 yards.
"What we have to do is play to our team's strengths more so offensively," Sumlin said. "I would say ... it's not just Khalil. For Shun Brown to have one touch is not OK either. It's not so much about plays, it's players and putting them in the right position to be successful, and we have to do a better job of that."
HEISMAN HOPEFUL
Houston DL Ed Oliver started his season with 13 tackles, including 3 ½ for loss, in a 45-27 win against Rice.
"He's a great football player, and there are going to be a lot of different schemes that he's going to face this season," Houston coach Major Applewhite said. "There are formulas that'll start coming out, and that'll evolve throughout the season. You'll begin to see how people are attacking him. He's going to get everything from snap count to perimeter runs, trap blocks and double teams and triple teams. He's going to see it all."
TATE THE LEADER
Tate, a junior, rushed for 1,411 yards and 12 touchdowns last year while throwing another 26 touchdowns. Against BYU, he was held to 14 yards and one touchdown on eight carries while throwing for less than 200 yards. Despite that, Sumlin was impressed with his leadership, especially when the Wildcats trailed by 18.
"As the game progressed, I thought he did a nice job," Sumlin said. "We get behind in the third quarter, and because of the number of possessions that you're going to have late in the third quarter and in the fourth quarter and knowing that we had to throw it to get back in the game, I thought he handled that very well."
DEFENSE LEADS TO OFFENSE
Houston's quick strike offense accounted for 28 straight points in the second half against Rice. Houston finished with 586 yards, with quarterback D'Eriq King passing for 325 yards. Applewhite pointed to Houston's defense stopping the Owls six of 12 times on third down as a key.
"Defensively, in the second half, we started getting better on third down and started getting them off the field some, and then our offense started to pick it up, so the momentum and the complexity of the game changed in the second half," Applewhite said.
FIRST GAME BACK
Sumlin coached at Houston from 2008-11, leading the Cougars to three bowl games in four years and two appearances in the Conference USA championship game. Sumlin, who went 12-1 in his final season at Houston, said there were a lot of memories he had at Houston, but that it doesn't add anything extra to this week's game.
"If you're lucky enough to be around this business long enough, you've got friends, you've got places that you've played," Sumlin said. "That's college football. The passion for the game is the same regardless. You've got 12 opportunities that you're guaranteed every year. For us, this will be opportunity number two. The excitement for one, two, three, four, five will be the same."
___
More AP college football: https://apnews.com/tag/Collegefootball and https://twitter.com/AP_Top25