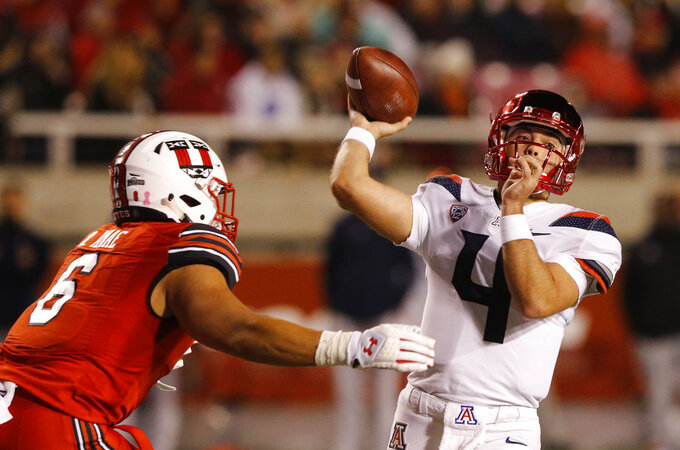 LOS ANGELES (AP) — Kevin Sumlin's last trip to the Rose Bowl was a nightmare as UCLA rallied in the fourth quarter to beat Texas A&M. The first-year Arizona coach now faces a return without his best player as the Wildcats face UCLA.

Quarterback Khalil Tate, a Los Angeles native who many saw as a Heisman Trophy contender at the beginning of the season, will not play due to an ankle injury. Sumlin said the injury has bothered Tate for most of the season but that he needs time for it to heal instead of continuing to tweak it during games.

Tate lasted only two series in last week's 42-10 loss to Utah and could barely hand the ball off to a running back during some plays. Rhett Rodriguez, the son of former coach Rich Rodriguez, will get his first collegiate start.

"Rhett came in last week in a two-minute drill situation and moved the ball well," Sumlin said. "He did as good a job as anyone could do on the road in a difficult situation."

UCLA coach Chip Kelly said he was sad that Tate would miss the game, but it also meant "we don't have to chase the fastest kid in the country around."

The Bruins come in with momentum after last week's 37-7 win over California , which was their first win under Kelly.

UCLA (1-5, 1-2) has one of the nation's youngest rosters but has shown steady improvement over the past two games. Running back Joshua Kelley has rushed for over 100 yards in three straight games and the defense forced five turnovers in last week's win over California.

"We started off 0-5, really easy for a team to give up. We definitely stuck to it and worked harder," linebacker Odua Isibor said. "We saw that no one was going to make us give up and we kept going at it."

Kelly is seeking even more improvement during the second half of the season.

"Things are coming together. We're tackling better and everyone has a better understanding of where they fit scheme-wise," Kelly said.

Here are some other things to watch on Saturday, which is UCLA's homecoming game:

KELLEY ON A ROLL: Kelley is trying to become the first UCLA back to rush for 100 yards in four straight games since Tyler Ebell had a six-game streak in 2002. The junior faces an Arizona rush defense that is second-to-last in the Pac-12, surrendering 4.6 yards per carry and 202 yards per game. Kelley is averaging 135.3 yards per game and 6.5 yards per carry in his past three games.

IMPORTANT GAME FOR SUMLIN: Sumlin said earlier in the week that the game is important to the Wildcats' recruiting hopes in Southern California. It also might be important for Sumlin mentally since his last trip there saw Texas A&M blow a 34-point lead to UCLA in last year's season opener. He was fired by Texas A&M at the end of the year.

AGGRESSIVE CATS: Arizona linebacker Colin Schooler leads the Pac-12 in tackles for loss with 11.5 and is part of a Wildcats defense that has recorded nine sacks in conference play.

AUTOMATIC IN THE RED ZONE: The Bruins are 16 for 16 once they get to the opponent's 20, with 12 of those scores being touchdowns.

KEEP AN EYE ON: Special teams. UCLA kicker JJ Molson has made all but one of his nine field goal attempts this season while Arizona has made only two of its last seven.